Home » My dog goes potty in the house!

Even with all the info out there on how to potty train a dog, it’s still one of the most common training problems.

“She just doesn’t get it!” people will say. “I take her outside, and she still pees in the house.”

Most of the books and blog posts on potty training will emphasize the importance of taking the dog outside and rewarding her for going potty. Another popular recommendation is to kennel train the dog.

This is excellent advice, but there is one factor I’d also like to stress: Preventing the dog from going potty in the house.

How to prevent a dog from going potty in the house

The key to preventing puppy accidents in the house is to restrict the dog’s freedom.

Whenever I have a new dog in my home, I assume the dog is not potty trained, no matter what I’m told. Just because a dog is potty trained in one house or at a shelter does not mean the dog will know what to do in my home.

I take new dogs or puppies outside as soon as we get to my house. If they don’t go potty, I take them out again 10 minutes later and continue doing so until the dog goes potty.

To reward the dog, I give her verbal praise as she is going potty, and a treat immediately afterwards while we are still standing outside. I wait until she’s done going potty before I give her the treat so she doesn’t try to grab the treat in the middle of peeing.

Indoors, here’s how I restrict a dog’s freedom

1. The dog remains on a leash in the house.

This keeps the dog near me and in my sight. Some “potty trained” dogs like to sneak off and go potty in back bedrooms or in the basement. Not gonna happen if he’s on a leash I’m holding, is it?

Keeping the dog in my sight also allows me to see if he is showing signs that he needs to go potty such as sniffing the ground, circling, pacing or whining.

Regardless, I still take the dog out every hour, especially if the dog is still a puppy. I make sure to take him out after:

After a few days, I may remove the leash, but I won’t allow the dog access to the whole house, even when I’m home. She will always be in the same room as me, which means I need to close doors or put up baby gates to keep her in.

After a few more days (weeks in some cases), I might allow the dog freedom in the main area of the house while I’m home. I’ll still block off bedrooms, bathrooms and other rooms with closed doors or baby gates.

I use a crate for the dog when I’m unable to supervise. Most dogs won’t want to pee in a small area, especially if it’s where they sleep. You want to use a crate that is big enough for the dog to stand and turn around in, but not so big where she could use one side as a “toilet.”

If you refuse to use a crate, or if your dog seems to freak out in a crate, try leaving the dog in a small area of the house like a bathroom. You could also use an “exercise pen” to block off a certain area if you have a small dog or a puppy.

5. Slowly give the dog more freedom. 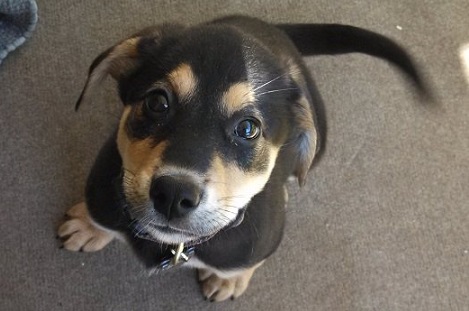 Once you want to try leaving the dog loose in the house while you’re gone, start with just 10 minutes. Then 20. Then an hour. Don’t just attempt to leave him for half of the day or a full day.

If he’s successful with an hour or two, that doesn’t mean he should suddenly have full freedom. Use the freedom as a privilege a couple times per week until you’re sure he’s ready for freedom all the time.

For example, I started leaving my dog Ace loose in the house for half the day, but only once or twice a week. The other days, he still stayed in his kennel when home alone.

As long as he was successful, I slowly kept leaving him out for more half-days and eventually a few full days. Once he was about 2 years old, he could be trusted to be left loose all the time, but every dog will be different.

So there you have it. If you know someone who is having trouble potty training his puppy, please pass this post on to him. I believe people underestimate the power of prevention.

What would you say is the most common potty training mistake?

Lulu has a nice big dog door. She usually only pees in the house when she's having a bladder infection. So after the last few accidents, I took her to the vet. She did a cysto to get urine and it didn't come back as a UTI. But she did have a very high urine pH and struvite crystals. The vet put her on a special diet to normalize her pH. I demanded bloodwork which turned out normal. 3 weeks into the diet treatment and she's still having accidents in the house. I'm taking her back in. I'm sure she must have an bladder infection.

I have a question I can't find an answer to anywhere re: housetraining. I understand the stuff about taking them outside, praising when they go, confining them for prevention, etc. But what do you do when you turn around and see that the dog just peed or pooped in the house right behind your back? If I caught her in the act I would say NO! and take her outside immediately. But if its been a few minutes, then what? Is it too late to correct them? Do you just clean it up and start over with prevention? Suggestions would be soooo appreciated. Thanks!

Just shrug it off and make sure to supervise better. Using the prevention tips should help prevent most or all accidents in the first place, along with continuing to reward for the right before.

That's my advice anyway! Yes, too late to correct them at that point.

I have a mutt that is about three years old. He has been living with my parents, and has always had a issue with peeing when he isn't the center of attention. I just took him in yesterday and so far he has peed twice next to the patio door and bathroom door. Both times are, from what I can guess, because I didn't let him go in the room with me. Advice please!!

I would go back to the basics as though he's not potty trained. Take him out every few hours and reward him with highly valued treats for going in the right place. When you can't supervise, put him in a kennel.

We have a 10 mo. female Yorkie that continues to pee & poop in the house. Never had this kind of trouble with a dog before. HELP!

What did you think of the tips I suggested? Have you tried all of those?

Just sent this to a friend of mine! I've been telling her the same as she works on house training her new dog - nice to have the same message told in a different way. Very clear and easy to follow. Great post!