How I’m coping with my senior dog’s retirement

I haven’t written a post specifically about Ace lately, so this is mostly about him.

My dog is 8.5 years old and in very good shape. He turns a little more “white” every day but overall seems very healthy.

His main issue these days is a sore shoulder, and sadly, my dog is officially retiring from running.

We haven’t gone running together in at least six months, actually, so this isn’t really a big deal.

It’s more about me admitting our running is over.

The significance of this, for me, is because this is a dog that went on multiple marathon training runs back in 2008, covering distances of 10, 12, 15 and even 20 miles. He was a member of a marathon training group that met at 6 a.m. Saturday mornings at what was then the Dick Beardsley Running Co. in Fargo, N.D. (In January, by the way.)

Ace and I would also run together for an hour each morning before I went to work at The Forum newspaper. He led me to eventually quit this job and start a business running dogs. One of the best and most important decisions of my life.

Our running has led me to a lot of things. New friends. Running with rescue dogs. Fostering. Writing a book. Finally completing that first marathon, years later.

Still, Ace doesn’t mind that he’s retiring. He won’t even notice, actually, because we still have our walks.

However, Ace also needs to retire from fetch.

My dog is the most ball-crazed, Lab-type there is, but he starts and stops so hard on his right shoulder that it’s causing a re-occurring issue. A very painful one.

For years, my dog has needed to take a day of rest after a hard fetch session. (Hard, meaning stopping and starting even three or four times on that shoulder.) But lately, that recovery time keeps getting longer and longer. It’s not a day anymore, it’s weeks.

This doesn’t mean my dog can’t play with a ball at all. He’ll still carry his ball around the house if he wants. He can carry it at the park and on walks. I’m sure we’ll even continue playing fetch in the water, because we are so lucky to live just 1 mile from the dog beach.

While “taking away fetch” may sound like a big deal to the humans, my dog will not notice this either. Even just rolling his ball to me while he lies on his bed and I lie on the couch is “oh so much fun!” according to Ace. So we do this often, while watching TV. 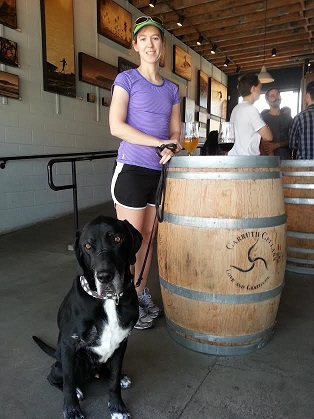 And we have our walks.

I am so grateful for every single walk I get to take with this dog.

We are embracing the lazy-beach-town atmosphere we live in.

“Can I pet this old guy?” a man recently asked, while my husband and I sat at a pub.

And then it was like we weren’t even there.

This grown man was on his knees hugging, kissing and playing with my dog. And Ace was whipping that tail, flinging drool and preparing to follow the man home. He would have followed him home. He just loves everybody, so, so much.

Life is good, if you are Ace.

You live in the moment,

Have any of you had to change your routine a bit for your senior dogs?

June Bug, my Basset Hound mix is 10 or 11 now and gets sore in the rear legs. She was never a runner, but we used to go to the dog park, where she'd have a blast playing chase and be chased with the smaller dogs. Now I'm afraid to bring her there 'cause if she runs around much she will be limping for a day afterward. Kind of a bummer, it was so much fun for her to play with other dogs (and for us to watch). If anyone has any suggestions on how to let her play off leash without letting her overdo it, I would greatly appreciate the input! Thanks for the great articles!

Oh, I fear the day that Kaya will have to retire from fetch. But you are right, she won't know the difference. Only I will. We never thought Zoey would get old and yet here she is at age 11. Luckily she still has her puppy moments and flips out over water, even though she just want to stand in it:)

Oh Yeah Lindsay...their lives are much shorter than ours and as an advocate for dogs I have seen many incredible canines grow old and have to change a routine....my husband even built a ramp for his 'best ever' dog so he could easily get up on the bed at night! Been wondering how you are doing after your big move to San Diego. I go now to a mountain town and will endeavor to start another pet sitting, canine expedition business. Wonderful is what dogs are...simply wonderful.

I am doing well, thank you for asking. Best of luck to you with your new business. I'm sure you will do really well.

Fuzzy is more than slowing down. It's so sad, but we still do things together...I make sure. He seems delighted to do.

My sweet mastiff Bella turned 9 in June. I also adopted an older mastiff lady named Izzy last year (she is 7). I got a ramp so that they can get into (and out of) my car without jumping and we do not do any long strenuous walks anymore. Just leisure walks to smell the smells and get pets from strangers. Life is still good, just a bit slower.

Aww, give those two mastiffs a kiss each from me.