I have such a soft spot for senior dogs.

I’m thinking seriously about adopting a senior dog in the future. But for now, one way to honor them is to feature three “super seniors” here on the blog.

By “super seniors,” I mean dogs that are living well into their teens.

I am so appreciative for the three people who kindly shared stories and photos of their special family members. I know it’s not always easy to reflect on an older dog’s life.

I hope you enjoy “meeting” these wonderful dogs – Klyde, Maddie and Jenna, and please feel welcome to share your own stories of your senior dogs. I wrote about my senior dog Ace earlier this week. 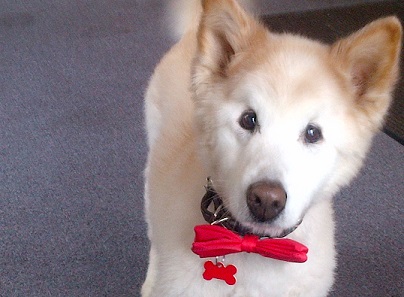 “Klyde is definitely a super dog, and the sweetest, most cuddly dog you can imagine,” said his owner Aaron Gessner, who thinks Klyde could be a husky/corgi/Sheltie mix.

Klyde is pictured above for 2014’s “Bring Your Dog to Work Day” and below with Gessner and his wife on Christmas.

Gessner’s wife was the one who found Klyde under a truck in 1996, so they know he has to be at least 18 years old. 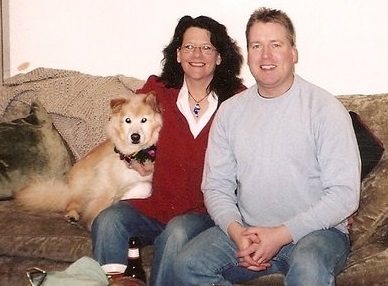 “Wherever we take Klyde, he brings joy and smiles to peoples’ faces,” Gessner said. “People want to pet him and talk about him. Of course they are always amazed when they find out he is a mutt and is 18 year old! They always say he looks just like a puppy.”

I asked Gessner if there’s anything that could have contributed to Klyde outliving most dogs.

He said Klyde eats homemade dog food, a mix of chicken, rice and vegetables. He also has the most amazing veterinarians.

“Klyde is perfection of body, essence, spirit, size, weight, obedience and partnership,” Gessner said. “He shares his food with the cat and any other furry guest that comes over. He just shares everything he has with everyone.”

Klyde used to be a country dog but adapted to life as a city dog later in life, Gessner said. He’s been hit by a car, attacked by a porcupine, sprayed by numerous skunks and been in a commercial.

“He is such a blessing.” 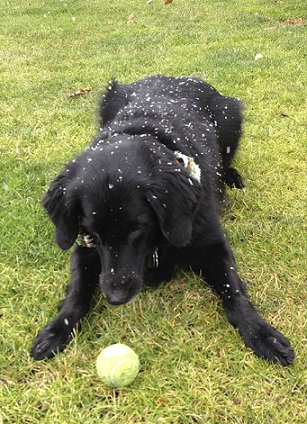 “She still runs after her ball like a puppy,” Donnarumma said. “We take her out at least once a day to play with her ball and be active.”

As a puppy, Maddie was the “runt of the pack” and the only female out of 12 puppies.

“When she saw me, she untied my shoelace, thinking it was a toy, and my family knew then that she was the one,” Donnarumma said.

She doesn’t know what has contributed to Maddie outliving most dogs. However, she believes Maddie’s food has been a factor, along with her dog’s happy and active nature.

“She is extremely well loved, and she knows it,” Donnarumma said. “Ever since the day we brought her home, she has brought so much joy to our lives.” 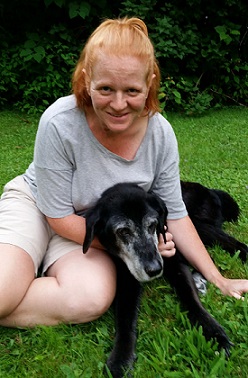 “I own the sweetest, super senior dog you’ll ever meet,” said Cathy Herard of her dog Jenna, a Lab/border collie mix who turns 18 this month.

“I’m so very glad we decided to take a drive to our local animal shelter on that particular day back in 1996,” she said. “Not only did she become my one and only ‘daughter’ when she joined our family, but she has also been one of the greatest gifts.”

Herard said she likes to think Jenna has lived so long because she has always been happy and well taken care of by her loving family.

“I also believe that having a younger dog in our home – Socks just turned 9 – has helped to keep her ‘young’ and active over the years.”

When Jenna joined the family, Herard’s son Cody was almost 2 years old, and Jenna had to put up with a lot of toddler behavior that was “disguised as love for the family pet.”

To Herard, everything about her dog is special.

“She has truly been the most loving and loyal dog a family could ever ask for,” she said. “We all feel so fortunate to have had Jenna as a furry member of our family for so long.” 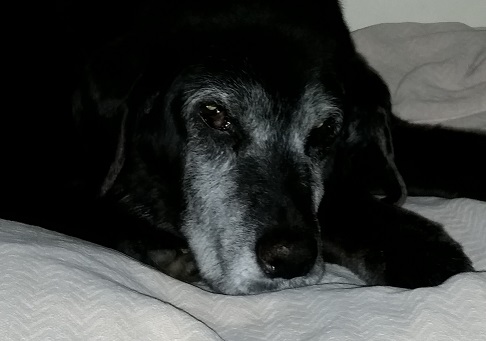 These dogs are so special, aren’t they?

Please share your own stories of your own senior dogs.

Awww, we had a Tibetan Terrier when I was growing up and she was blind from 2 years old and lived to a great age of 18! Its so nice to see a dog live so long especially with a disability. Its nice to know it hasn't affected them! :)

I love it! I wish more people who get high energy young dogs and can't handle them or don't have the time, would realize adopting a senior dog would be perfect for them. If I had the space, I'd adopt a whole bunch of them:) Some day when I can't keep up anymore, I'll definitely adopt one too.

So sweet! I hope Maya and Pierson make it into their late teens. Honestly, I've never had a dog live beyond the age of 13. In my younger years, though, I did not know the importance of good dog food. I used generic. Nowadays, though, I know better and Maya and Pierson eat very well.

I hope they live well into their teens as well.

Our trainer was recently telling us about the instructor who trained her who had a dog that lived to be 23. Being a trainer, his dogs were obviously super exercised and stimulated. He also fed raw and attributed much of her health to her diet.

Wow! I have never heard of a dog living that long!

Wow - love that these dogs are living such extended lives. Speaks to good food and care!