Do you play fight with your dog?

Home » Do you play fight with your dog?

One of the ways I play with my dogs is to “wrestle” or “roughhouse” with them.

I would get down on my hands and knees and growl at Ace, often grabbing at his legs or shoving him away. He would come charging back for more, play growling and bowing. Tail wagging.

We did this every day.

I know this is not the wisest way to interact with a dog, but I’m being honest here, and this is one of the ways I’ve always played with my dogs.

I think I learned it from my dad, although the majority of the male dog lovers I know also play fight with their dogs.

The dogs love it!

But other than myself, I don’t know any women who “wrestle” with their dogs. Do you?

And while my current pup Remy seems to think this type of play is “oh so much fun!” there are obvious risks involved, and smart trainers know to warn their clients against “roughhousing” with dogs.

Here’s why you shouldn’t wrestle with your dog:

2. High excitement levels in dogs can lead to fights.

Most of us have seen play fighting escalate into a fight between two dogs.

You’ve probably been at the dog park when two dogs start out running and chasing, maybe wrestling and barking a bit. And then all of the sudden the “play” escalates to an actual fight, and the dogs need to be separated.

These same dogs will often go back to being friends seconds later, even though they seemed to hate each other moments before. It’s usually just “talk.”

But this is why people, especially kids, need to be extra careful when “play fighting” with dogs. It can get out of hand easily and quickly. (And guess who’s going to get hurt?)

This is why I know I should not play fight with my weimaraner Remy. He simply gets way too excited and ends up biting too hard. But, we play this way anyway.

What about tug of war with dogs?

Even non-wresting games like tug of war or fetch can lead to high excitement levels in dogs.

While tug is nothing to worry about for gentle dogs like Roxy (the shepherd, pictured), some dogs really get serious about tug of war.

I don’t know about you, but I’ve had my hands accidentally nipped a few times while playing tug. I’ve also seen dogs break into serious fights over rope toys, even though it all started out as play.

Playing fetch is another example, not because it leads to aggression but because it gets some dogs so hyped up that they can’t quit. Ace was very much this way, and being obsessed over a ball not a healthy state of mind.

For this reason, it’s always important to set limits no matter what type of “game” or “work” the dog is doing.

I recommend making the dog take a break from intense play every couple of minutes. Some dogs won’t settle down on their own, and that’s when problems occur. If it’s not a nip or a fight, it’s obsessive behavior or just remaining in a hyper state of mind.

If you insist on play fighting with your dog, here are my suggestions:

1. Know that play fighting with dogs is risky.

I do not recommend play fighting with your dog, but I know people will do it anyway (as I do).

For obvious reasons, you should never roughhouse with someone else’s dog. The dog may not know you very well, and this could scare, hurt or threaten the dog.

2. Do not play fight with a dog that is overly dominant.

I know “dominant” is a naughty word in the dog world, so call it whateer you want. How about “impressed with himself”?

You know what I mean. If your dog is always seeking “status,” or trying to push his limits with you, then you’re probably better off avoiding wrestling games with your dog. Tug of war may not be a good choice either.

3. Pause the game often so the dog’s excitement doesn’t escalate.

If you’re roughhousing with your dog, make sure to be aware of his arousal levels and to pause every minute or so to help him settle.

This is a good time to practice and reward a sit or a down command. You want your dog to be able to calm down and obey you, even in “exciting” scenarios such as intense play.

You should also end the game by asking your dog to sit or lie down for a minute or so and then reward the calm behavior.

Just five minutes or so is enough for most dogs, no matter what the game is – disc dog, agility, tug, fetch, wrestling, etc.

If your dog is extra hyped up, panting heavily and starting to get a bit obsessive or wild, it’s a good time to work on a more calming exercise like “down” and then end the play session or take a break.

5. If you play tug or fetch with your dog, teach him “drop.”

All dogs should learn to obey the “drop” command, even during an intense session of tug.

Also practice saying “ouch!” if your dog’s teeth even so much as gently touch your skin. The dog should learn to drop the toy instantly when you say “ouch.”

I recommend you turn around and ignore your dog for about a minute afterwards so he learns the fun ends if his teeth touch you.

OK, what are your thoughts. Do you wrestle with your dogs like I do?

Let me know your opinion on all of this! I’m curious if there are other women out there who “fight” with their dogs.

*For obvious reasons, most trainers are against roughhousing with dogs, and I think we should all consider that advice. I’m lucky to have a seriously laid-back, submissive, polite dog, so I probably take his gentleness for granted. 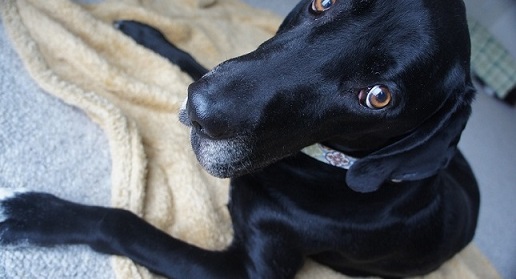 Previous
Would You Spy on Your Pet Sitter with a Nanny Cam?
Next
Why we need dog awareness, not pitbull awareness
Click here to cancel reply.

I wrestle my kiddos (both are pitties) once in a while. My girl gets super excited so I’ll stop several times to ask for a “kiss” and she pauses and calms down. My boy is a total sun bum, but he loves to play fight. He doesn’t know his own strength so I have to be more careful with him, but he’s great with the breaks too. Unless it’s winter and we’re in the snow, then he likes to bite my boot laces when I walk LOL.

I have only play fought with one of my dogs. She was a rescue mixed breed who bonded with me in less than two hours of getting her. She continually showed me her willingness to defend me even when cowering in fear. Her greatest joy was when I put on a long sleeve shirt and allowed her to fight with me. She barked, growled and howled as if it were real but never bit down and stopped as soon as I called a halt. It was a small accommodation to a dog so willing to face her own fears to defend me.

I came here because my son who is 9 roughhouses with our Labrador puppy ( his name is also Ace ) . He hasn’t learnt this from anywhere but he seems confident in what he is doing. I just wanted to find out more about it to take some safe measures.

I do but not extremely. If tug randomly will say leave it. If wrestling, will tell them place to go settle on bed until calm down. I do think certain breeds have a harder time calming down so this teaches them how to control themselves instead of ignoring the issue

Hey, hey anxious puppy Rudra here, no wrestling for me! My lady owner would love it and did with her first dog but I just can’t handle it. I start screaming and high pitch barking because it is so very exiting, I hop I bite and I can’t stop if my owner stops I try the cats! Fetch is a different thing I m a herding dog I love to fetch outside and after a couple throws ( of a ball) I “herd” it back I do this with my nose , push it in front of me , it takes a while and makes me tired , my owner loves this! Love and wet kisses Rudra the Blue Heeler