Home » Should I Correct My Dog for Growling?

Growling is a way for dogs to communicate, and I would rather have a dog growl than bite.

(Of course, dogs also growl when they’re playing and having fun too!)

Dog owners have a tendency to scold dogs for non-play related growling.

Instead, we should think about what we could do differently to prevent the dog’s need for growling in the first place.

Here are a couple examples: 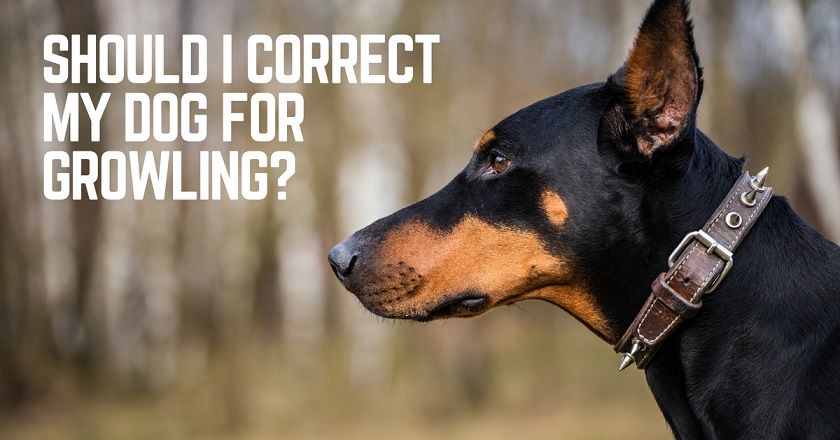 My Lab Ace will sometimes growl at energetic dogs that annoy him.

He’s good at ignoring youthful dogs, but if they keep nipping or trying to wrestle, he will eventually growl. It’s not much of a growl, just a slight lip curl and showing his teeth. They usually get the message. If not, he might let out a more ferocious, but harmless, snarl.

In these situations, it’s generally best not to scold the older dog. It’s the younger dog who should be re-directed and taught not to be such a pest. This should happen before the older dog feels the need to growl.

One time I was hugging and talking sweetly to a client’s 100-pound dog. The dog let out a low, scary growl.

I immediately realized what I’d done and felt horrible. I had invaded the dog’s personal space, and thank goodness he had the courtesy to warn me vs. bite.

So many dog bites happen when people ignore or fail to recognize a dog’s signals. A growl is about as clear as it gets, and usually it means we’ve missed prior hints. Like, perhaps the dog was looking away, licking his lips, trying to back up, etc.

3. Dogs growling due to fear.

I have to admit I have a tendency to tell a dog “no” when he growls on walks. Maybe he’s scared of tall men or people in hats or whatever it might be.

But this isn’t the best approach if the dog is reacting out of fear. Sure, calmly expressing your disapproval is one thing, but a firm correction isn’t fair. I would rather list out the dog’s exact triggers and threshold and then slowly work on building his confidence using praise.

I’m not perfect, though. I’ve told my dog “No!” plenty of times for growling.

Are there situations where you feel it’s justified to correct a dog for growling?

I feel like I could go on and on with examples, but I’d rather hear your ideas.

Let me know in the comments, and have a great rest of the week!

What about grunting? My dog grunts at dogs on the other side of the fence and goes up to them to sniff or try to play. My partner thinks this is a hormonal thing, but I don't think so.

if you treat the disease the symptom will stop. I had a fear growler Doberman. I worked on her triggers with positive training and good treats. she also resource guarded. I learned what was really important to her to act this way and worked on that and she learned what I wanted her to learn. I also groom dogs and get growled at a lot. mostly because they do not feel comfortable. once I work with making them comfortable the growling stops. never in my opnion stop a growl.

My 5 month old puppy growled at me today. He was under the table At an empty dog park. We play fetch all the time but for some reason he wouldn’t drop the ball when I asked him and would run when ever I reached for it. He knows the command drop it and leave it. I eventually caught him (which I didn’t want to do) he growled at me with the ball in his mouth and I pulled it out and cut my finger alittle. I felt like I did something wrong. It’s been on my mind a lot. I did scold him for growling because I got upset that he didn’t drop the ball. (I know! I know!) he’s never had any food aggression. And I always make him wait for his food! I just don’t understand why it happened. Any advice would be greatly appreciated!

My heeler, Nakita is usually real good about no barking or growling at other dogs or people when we are outside but when she is in either the car, truck or in the house she does both way to much. Sometimes, I think she's just protecting her property and us and then other times she goes off for no reason at all. When she does this, then yes, I firmly correct her, but she won't quiet until I look to make sure that all is well. I does get annoying at times, but I know that she just thinks she's doing her job and for me that's okay.

The only time I tell the older sheltie male to stop the growling. Is when the food bowls have been pick up. My male sheltie is 16 years old. My girl is 6 year old sheltie.. I do agree that not all growls need to be corrected. The only other time I corrected a growl was when I walk by one of my sheltie males when he was eating. All I did was touch him on the butt. He turned and growled at me. We had words.

Haha! We had words!