My mutt Ace is the most gentle dog I know, but he will growl at other dogs when appropriate, like when our puppy won’t stop biting his jowls or when a dog won’t stop humping him at the dog park.

There is usually at least one pest at the dog park who runs around trying to hump everything in sight!

Usually my dog Ace tolerates this behavior for about five seconds. Then he flings his body around. If the “humper” persists, Ace’s hackles go up and he might bark at the other dog – “Do not like!”

If the dog still tries to hump him, that’s when Ace lets out a ferocious growl. This is usually followed by a friendly tail wag – “Hey, I’m a nice guy, but please don’t hump me.” Both dogs shake themselves off and either part ways or play. (2018 update: Ace has passed away.)

I remember when I was pet sitting a German shepherd puppy and an adult Maltese from the same family. The German shepherd was around 45 pounds soon to be 75+ pounds, complete with puppy teeth and clumsy paws. The Maltese was 4 pounds. 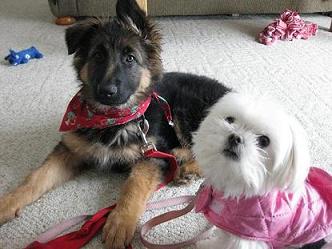 If your dog growls at other dogs, don’t punish him

Growling is a dog’s way of warning us that she is feeling stressed. Dogs that are punished for growling learn to stop giving this warning sign and go right to a snap or bite. Instead of correcting a dog for growling, re-direct her attention and give her a break from whatever is causing her stress.

There are all kinds of scenarios that will cause a normal, social dog to growl. I’ve covered some of them below. Feel free to share more examples and suggestions.

1. It’s normal for dogs to growl when they are playing

When two dogs are wrestling and playing, they will both play growl. It’s easy to tell when both dogs are having fun, because they will show an equal amount of energy.

The more energetic dog will probably roll over on her back and let the other dog “win” so the other dog will feel comfortable “attacking” her. Then they’ll switch. Both dogs will play bite and play growl – and it gets very loud! They might chase each other, bite each other, bark or play tug with the nearest toy. 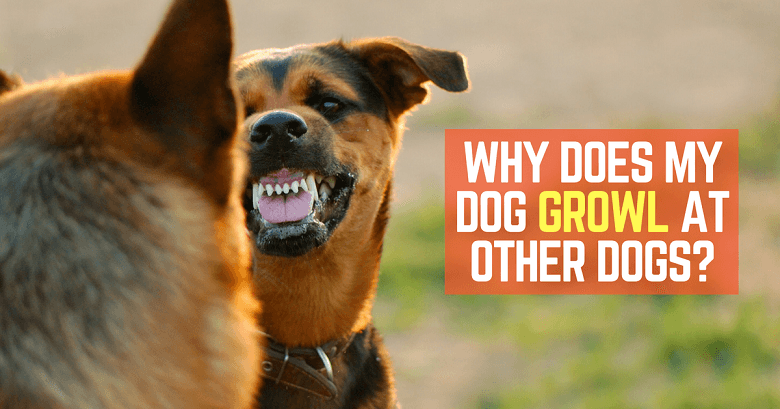 Normal dogs use growling to communicate after the other dog (or person) has ignored previous warning signs that they’ve had enough.

For example, if one dog no longer wants to play, she will likely stop instigating the wrestling. She will start avoiding the other dog by looking away or pretending to be interested in something else “Oh, this smells good!” She will likely stand up and shake herself off, which dogs will do when they are ending something, kind of like a big sigh of relief – “Well that was fun, what’s next?”

If the other dog continues to pester her, she might yawn (a calming signal) and keep looking away. Next, she might stiffen, raise her lips, crinkle her muzzle and growl.

If the other dog still won’t leave her alone, that’s when she might snap, lunge or let out a vicious bark – “Get the f— off me!”

3. Owners make the mistake of scolding the dog that snapped.

Really, the other dog (the pest) in this example should have been re-directed long before the incident escalated. Younger, more energetic dogs need to learn boundaries, especially if they haven’t been around enough dogs and can’t control their never-ending desires to play. These are the dogs that shouldn’t be at the dog park quite yet. They should socialize in smaller, more controlled groups of dogs first.

In scenarios such as dog daycare or the dog park where one dog won’t leave my dog alone, I re-direct their attentions with toys or food or by calling them.

Sometimes I have Ace sit and stay at my side for a minute to give him a chance to re-group. Usually the other dog runs off and annoys someone else. This “time out” is not a punishment. It’s a chance for my dog to relax and take a break. After a minute or so, my dog is eager to go back and play. If not, then it’s a good time for us to leave the park.

I also call my dog and have him sit at my side whenever a new dog enters the park so my dog isn’t the one overwhelming the newcomer.

4. Dog growls at other dogs when guarding/showing possessiveness of toys or food

Dogs have a tendency to guard food or toys. Ace will growl at other dogs that try to take his resources. This is common dog behavior, although probably not something any of us would like our dogs to do. The dog is saying, “This is mine! Leave me alone!” Typically, the dogs work this out on their own with no issues. 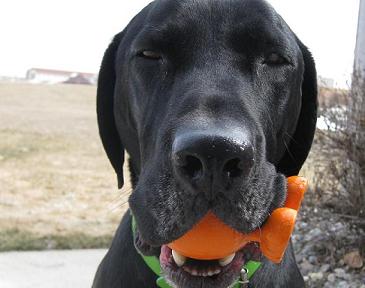 The problem is, some dogs become overly possessive and will bite a dog or person who comes near their food or toy. This is why I do not tolerate any possessive growling from my dog even if he is guarding something that is technically “his.” If he growls at an obnoxious young puppy who needs to learn some rules, I think that is acceptable. But if he growls at my cat walking by who doesn’t even want his toy, that is not acceptable.

I also expect all dogs in my house must understand that everything belongs to the humans first. If Ace wants a toy, he is going to sit first. If he wants to eat, he is going to lie down and wait calmly for a few minutes. I make this process fun and rewarding for the dogs (“Wow, what a good sit! You’re such a good boy!”), not stressful and frustrating.

You also want to teach your dog a command such as “leave it” or “drop” or “trade” and help him associate receiving something even better for obeying. For example, if he drops the rawhide, he gets a piece of chicken. My dog understands “drop” to mean “put it down” and “leave it” to mean “don’t touch that.” He doesn’t need treats to obey these commands, but I try to surprise him every now and then with something wonderful (a tennis ball) for obeying.

For more information on possessiveness, see my post on how to help a dog with toy aggression.

5. Dogs growl when they are scared

Animals will get defensive if they feel threatened, especially if they are cornered. 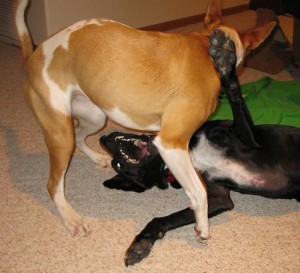 The key here is that normal, socialized dogs are not going to feel threatened by something ordinary like a dude shoveling his driveway, a kid racing by on a scooter or a big, black dog barking. That’s why it’s important to socialize puppies and dogs to as many different people, sounds and situations as possible throughout their lives.

Dog owners need to remember that growling is a normal part of dog communication.

It is our job to socialize our dogs and give them plenty of opportunities to interact with other dogs. It is also our responsibility to limit the amount of stress our dogs experience and to provide them with safe and constructive ways to deal with the stress they inevitably will experience.

What are some other scenarios where it is normal for a socialized dog to growl?

Do you have any questions or examples about your dog’s growling? Leave them in the comments!

Thank you for supporting That Mutt on Patreon! Click here.

225 thoughts on “My Dog Growls at Other Dogs”