Home » Do you let your dog play in the house?

When my dog was younger, I did not allow him to play indoors.

The main reason for this was because I wanted him to be calm in my apartment. I want my living space to be relaxing, which means no running, chasing, barking, etc.

Ace also has an extreme retrieving obsession and will fixate on any type of toy, expecting the nearest person to throw it.

When he was younger, it was just easier to keep all his tennis balls and squeaky toys put away. I would bring them out for maybe five minutes or so here and there for play initiated by me.

And we also played outside. A lot. Every day.

We played chasing games, fetch, tug, hide and seek, you name it.

Indoors, Ace had his chew toys, and those were for chewing, not playing. Each day I would rotate which one or two chew toys he would get, like a Nylabone, a Kong, a raw hide, etc. 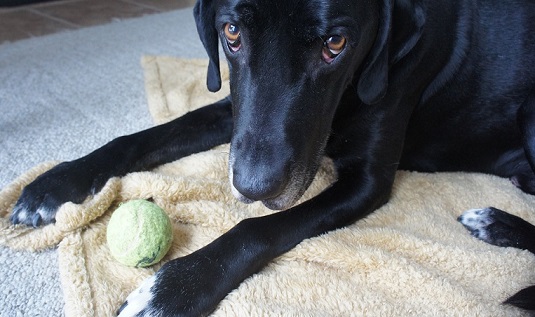 Now that my dog is older (8), we do play indoors a fair amount. He has his basket of toys in the corner of the room, and a few times each day he’ll walk over, select one and present it to me for tossing.

We do play a little low-key fetch in our apartment, and we play some pretty serious tug of war and wrestling games.

Mostly, it’s my dog’s age. I can only throw his ball for him about three times outside before he gets really sore. And now that we’re living in a more urban area, there are fewer places where it’s safe for him to play off leash.

We make up for this by playing indoors.

I still have an extremely calm living environment compared to everyone else I know, but we definitely play a lot more indoors than we used to.

Do you let your dogs play in the house?

You may think this was an odd topic to bring up. It seems like most people allow their dogs to run, play, wrestle and tumble in the house, especially if they have two or three dogs.

When blog reader Rachel from My Two Pitties left a comment on this post the other day that she trained her dogs not to play in the house, I realized I had done the same with Ace.

Now that we’re seriously thinking about adding a second dog to our home, this is a topic I’m thinking about again. We are leaning towards adopting a younger dog, which makes these types of rules even more important.

I think dogs need to learn when they can and can’t play, and as long as they are given plenty of exercise, training, interaction and love throughout each day, they can learn to be calm while in the house.

That’s just my approach. I know everyone sets their own rules and has their own opinions.

Let me know your thoughts.

*Also, sign up for my newsletter here. You’ll receive my best content before everyone else, typically twice per month.

There's nothing wrong in playing inside house. But train them to have a boundaries. :)

Our dogs get to play in the house. They aren't as rough as they are when they're outside. They don't run, but they do have a good time and we have a home that is perfect for dogs so it works for us :)

I let them lazy play in the house, but no rough housing. I also watch to make sure no one is getting to amped up/aroused while playing in the house.

We allow tug of war and a little fetch but otherwise, playing is for outside. With hard wood floors I really don't like fetch in the house, but a little tug of war is fine. We did not allow humping in the house when we had Belle, but D.O.G. is a little big to do it to Missy and she's tried to do it to us but a firm no and shaking her off has stopped that habit.

I think it truely depends on you as a dog owner. And its ok for some things and not for others. And especially make sure its not ok with company coming over, that could be disasterous! :-) But would make a great story!

With me it's always question of safety. So the short answer is yes, but only in moderation so nobody (the dogs) gets hurt.

Mostly, the guys are not much interested in playing in the house. When they get really playful, I know I didn't give them enough exercise outside.

Yep, that's how it is for me too. If Ace is getting really playful, I know I haven't exercised him enough outside.