I don’t like to post stories about dogs being mistreated because these rare, isolated incidents are often blown way out of proportion.

But, this is a local story, and the San Diego County Department of Animal Services is asking for the public’s help.

A San Diego resident contacted the County Department of Animal Services Saturday after seeing an injured poodle running loose in a park, according to the San Diego County News Center.

An animal control officer responded and found a female white poodle with several rubber bands around her muzzle, according to the SDCNC.

The dog was immediately transported to the department’s animal care facility on Gaines Street, where veterinary staff removed the rubber bands and treated the dog’s injuries. The rubber bands had been on the dog for so long that the bands had cut all the way down to the bones in the dog’s muzzle.

“This may have been some sick attempt to keep this sweet dog from barking,” stated Dawn Danielson, the Director of Animal Services.  “However, their actions have caused this poor dog to suffer horrendous pain for a very long time.”

Based upon the seriousness of the dog’s injuries, the department has started an animal abuse investigation. 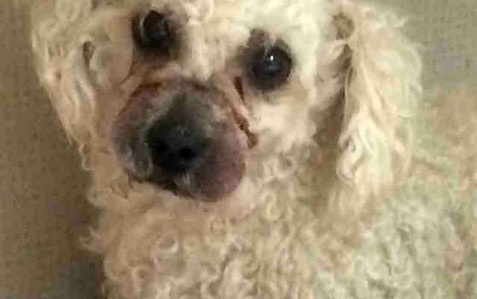 The Department said on its Facebook page that it is asking for the public’s help in finding the person who did this. Full story here. Photo from SDCNC.

Oh my gosh. I'm glad the poor thing got help! I bet she'll get a home so quick her head will spin, too. I found a lovely little poodle last year and I had people practically knocking down my door to introduce her to some acquaintance who wanted a poodle. She ended up getting a great home with my vet's assistant's sister, even though she wasn't spayed and needed MASSIVE amounts of dental work done.

Yes, I bet she'll find a home quickly too. Poor girl. I didn't realize you found a lost or abandoned poodle one time. I'm glad things ended up OK for her as well.