My dog turns 9 this year, and yes, we still have training goals.

With this post, I want to accomplish three things:

First, I want to show new dog owners that a dog is never fully “trained.” It’s an endless work in progress, at least for me.

Second, I hope you’ll see that just because I write about dog training, that doesn’t mean my dog is perfect. Far from it. And I’m not perfect either.

Third, I hope I encourage you to set your own dog training goals if you haven’t already. I’d love to hear what you’re working on this month. On Thursday I’ll be announcing a fun but motivational dog walking and training challenge, and I hope you’ll participate!

The following are the dog training goals I’ve set for myself.

I’ve been pretty laid back over the last year or so with Ace. He’s getting older, so I tend to let things slide. Who cares if he pulls? Who cares if he sits and begs while we eat? He’s old, I tell myself.

Because of that, he’s probably not as well behaved as he could be, which is OK, but that’s why I have goals. 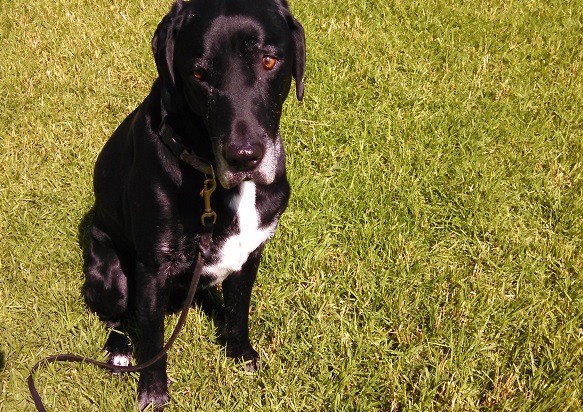 1. Give my dog off-leash time at least twice a week.

You may not think this is a training goal, but it is.

When we lived in Fargo, N.D., I could just open our patio door and let Ace run around off leash for 10 or 20 minutes. We lived right on a City park, and we’d play there each day in addition to our leash walks. While my dog is on the low end as far as physical energy, I did not realize how important those off-leash play sessions were until moving.

Here in San Diego, a week or two (or three!) can go by where I don’t give Ace any off-leash time. Because of this, Ace has a lot of physical and emotional pent-up energy. He’s been whining a lot lately, and I know letting him run around for even five minutes a few times per week will make a huge difference.

There are plenty of places where I can do this. It’s just a matter of making a point to do so. We live a mile from the dog beach for crying out loud.

Yep, this one is related to goal #1. My dog has definitely been whining a lot lately, and it’s annoying. He’s always been a bit of a whiner, and I know it’s mostly because I give him attention for whining. Even if I scold him for it, he wags his tail like “Ha! Gotcha to look at me!” 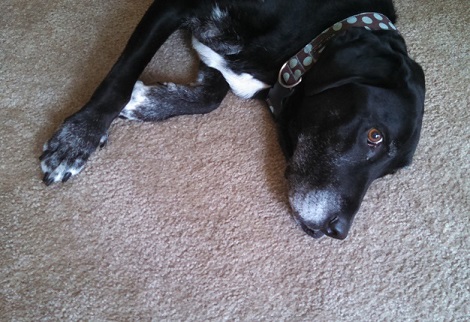 My husband Josh reports that Ace hardly ever whines when I’m not around, and I believe it. Sometimes I need to take some of my own advice – ignore your dog for whining!

My plan is to ignore any whining for 30 seconds or so, and if he doesn’t stop, simply get up and move to another room without reacting. Or, move Ace to another room when necessary, like when he’s whining while we’re eating. Which he’s been doing lately. Oh, Ace! 🙂

I used to be really strict about heeling. Basically, if Ace was on a leash I expected him to heel.

I think that’s a little too extreme now. It’s only fair to give the dog some on-leash freedom to sniff and explore as a reward for walking politely. Here’s my favorite post I’ve written about teaching heel.

The problem is, I’ve been a little too relaxed with Ace, and he’s been pulling a lot more because of it. For example, he’ll suddenly dart across the sidewalk to sniff a random plant. And, he pretty regularly tries to pull towards other dogs while making those excited breathing and “choking” sounds.

My “solution” around other dogs has mostly been to hold Ace back, which is not teaching him anything. It’s actually making the problem worse, because he probably anticipates the tension in the leash, which encourages more pulling. Sigh …

I’ll be writing more about this on Thursday, but my goal is to work on heeling with Ace by carrying treats, encouraging him to pay attention to me, and stopping when he pulls forward.

Pretty basic, but we all know it’s easier said than done. I’m lucky, because my dog actually knows what “heel” means (remain at my left side without pulling). It’s just a matter of enforcing it a little better.

I taught my dog that “sit” means “sit and remain sitting until I say OK.”

The problem is, we’ll tell Ace to go to his bed, and then we won’t say anything for a half-hour because we basically forget about him!

This isn’t fair to Ace, and I know it’s been a little stressful and confusing to him. It’s also another reason why he whines because it’s a way to tell us, “Um, guys?” And then of course we release him, which reinforces the whining!

Some dogs are living outside tied to a barrel, and my dog is whining because he doesn’t know if he can leave his organic dog bed. Good grief. What have I created? 🙂

So that’s basically it for us.

Let me know what you’ll be working on this month, and I hope you’ll join me Thursday when I write more about the upcoming walking and training challenge.

What are your dog training goals?

You should also consider signing up for my email newsletter where I share additional info on training and living with dogs.

Have a good week!

This post is a great reminder to keep working with our dogs. Thanks for making me put some concrete thought to what I want to work on with Baxter this year. Recall is still our biggest challenge, so that definitely has to be our focus. A strong recall will allow me to be more confident with him off-leash. I'd like to make a conscious effort to go out more regularly with our hiking group (which means off-leash and socialization and exercise--all good things). We don't have opportunity to walk in town often, but when we do Baxter tends to pull on the leash and be distracted by other dogs and interesting people. Practicing loose leash in civilization will be secondary goal.

I'm sure you'll make a lot of progress. I've enjoyed hearing what everyone will be working on. You'll have to let me know how it goes!

It's funny, I was just thinking about this very thing this morning while drinking my coffee. My goals aren't just about training, but rather they're more general in scope. I decided I need to be sure to give my dogs a few minutes of undivided attention throughout the day. Sometimes I get so busy, they don't even get talked to or petted as often as they deserve and that's just not right. I'm also thinking of giving them some treat puzzles and I'd like to take five minutes a day to work on some tricks - the old ones and maybe something new. At the very least, I plan to go back to having them sit and lie down before getting their food. I've really gotten lax there! These things are especially important during our long cold winters as they are definitely less active. Thanks for the post.

I've been really trying to work on the heal command as well and I think that is really going to be my main goal . I've also been working on getting Ottis to stay with me more consistently off the leash. I'm not sure how successful I have been. I'm rally looking forward to your post on Thursday.

I had to laugh when I read about forgetting about Ace when he's told to go to his bed. I've done that a few times and feel so bad when I remember. My training goals for 2015 are to work with Haley's excitement when greeting other dogs and also loose leash walking. I used to be really frustrated when she would pull on the leash, but it really only happens for the first few minutes when we head out for a walk and then she settles in a little closer to me. She's usually walks a little bit in front of me, but it's not something I worry about too much.

Haha! Yep, it happens quite a bit around here. Poor Ace :)

Those a great goals! It sure is nice though to have a dog who you know so well and visa versa. I'm enjoying that more and more as Kaya & Norman get older.

We practice some obedience on all of our off leash outings just to stay sharp(ish). Kaya is especially fun to work with because she will do anything with the reward of retrieving her ball.

I'd like to teach them a new trick or 2. Kaya really enjoys the mental challenge. Last year I taught her "legs" (where she goes through my legs, sits & looks up at me) Norman never caught on to it:/ But on therapy visits they ask to see tricks sometimes and Norman only knows "wave" for now.