So sad to hear that another one of the dogs rescued from Michael Vick’s dog-fighting compound in 2007 has died.

“This morning, little, old, bow-legged Gracie passed away and got her angel wings. Any words we write here could never begin to express the profound, positive and lasting impact that this little, black pit bull had on so many people who encountered her or heard the story of her suffering and triumph,” said a post on the animal’s league’s “Gracie’s Guardians” Facebook page.

“We are and will be forever grateful for this little, broken black dog and everything she personified.”

Gracie arrived at the Richmond Animal League in 2007 and was quickly adopted by the group’s board president, according to CNN. She had been used as a breeding dog, not a fighter.

It’s so heartbreaking that as a whole, the dogs rescued from Vick’s compound are aging and passing away. Their stories are inspiring, and if you haven’t read The Lost Dogs, I recommend you do. 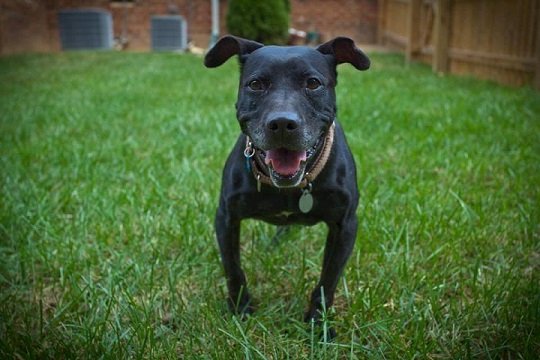 So glad she found some peace in her life, even if her suffering was very real for too long.

I have to say I disagree a little bit about it being heartbreaking. I think it's wonderful that for the most part these dogs have been able to grow old comfortably in loving homes and be the dogs they were meant to be. While it's sad when anything dies, it's wonderful that they've died in peace, and not in violence.

(But big agree on the Lost Dogs. It was an amazing book).

You are so right! Such a good point.

Very well put. I would have to agree.

It makes me so sad any time one of the former Vick dogs passes away. They had such an amazing impact on so many people just by being dogs.