Have you voted for your favorite shelter or rescue group in DogNation.net’s “Best Friend’s Friend” contest?

The voting is taking place now through Feb. 28, and the winning organization will receive a $500 donation.

Plus, if you were the one to originally nominate the winning organization, then the donation will be made in your name. I think that’s pretty cool.

You can vote once per day, according to the contest rules. To do so, just click where it says “vote for me” under the rescue of your choice. It only takes a second, and you don’t have to vote for the same group every time. Voting is open to anyone.

Click here to vote for your favorite shelter or rescue

When I first introduced this contest, I said if any of you nominated an organization, I would feature that group here on That Mutt.

I wrote about most of those groups in this post, but I still have a final group to feature, Save-A-Mutt. 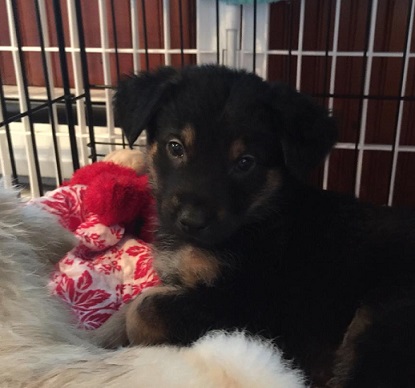 Save-A-Mutt started out as a dog wash called Scrub-A-Mutt to raise money for dog-based charities in Washington, according to its web site. It still holds this fundraiser annually, but it has expanded to include hands-on rescuing.

According to its Facebook page, the group rescues puppies from kill shelters in California and transports them to foster homes in Washington.

The group was nominated by Kimberly G. (you can read her blog here).

[quote_center]”I love what they’re doing to rescue dog moms and their puppies from high-kill shelters.”[/quote_center]

“I love what they’re doing to rescue dog moms and their puppies from high-kill shelters,” Kimberly wrote in a comment on my blog.

Since I live in southern California, I am all too familiar with the need to get dogs out of these kill shelters. Save-A-Mutt calls the rescued pups “prison break puppies.”

Pictured above is a puppy named Paul who is currently up for adoption with Save-A-Mutt (photo from the group’s Facebook page).

“He is a sweet boy, more on the mellow side,” according to his description on Facebook.

The yellow “pillow” he’s sleeping on is his sister Mary. 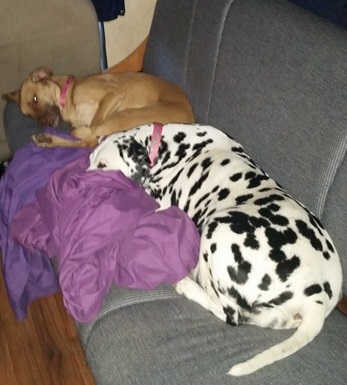 He created the Best Friend’s Friend contest as a way to support some of the best shelters and rescue groups across the country.

He said he thought the contest would be a great way to get people to tell him which shelter or rescue they think is most deserving of the donation.

“I could just donate to my local shelters in Tennessee, but this seemed like a better use for my donation,” Rodney said.

Pictured are two of his dogs, Roxy the dalmatian and Sunshine the boxer mix.

You can head over and vote for the group of your choice here.

What are some of the rescues or shelters you support?

*Note: I received compensation in exchange for writing about Dog Nation’s contest. The top photo is from Labs and More of San Diego, the group I nominated for the contest.

Well I have to vote for the California Labs of course. Even though we're too far to rescue from them.