Home » What do you think of GoDaddy’s Super Bowl puppy ad?

Update: GoDaddy said on its blog that “We are pulling the ad from the Super Bowl.” The puppy video is no longer available on YouTube.

We’re all familiar with the famous Budweiser puppy in recent ads.

Well, a GoDaddy advertisement released this week also features a lost puppy. Only, this ad has a bit of a twist.

You can see for yourself in the video below (update: It’s now been pulled), but the ad is clearly poking fun at other commercials.

The ending also has some dog lovers upset.

It depends on how you look at it. Some will say GoDaddy is giving attention to puppy mills. Others say its making all breeders look like idiots.

If you had a chance to watch the ad before it was pulled, let me know your thoughts. 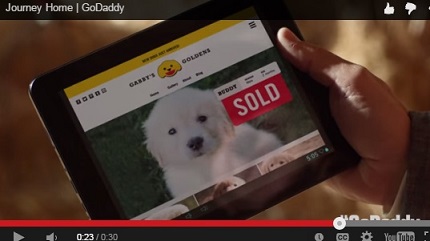 We used to have an expression, "As funny as a dead puppy." That describes the ad.

It says the video is private...did the pull it?

Yes, they pulled it.

We were loving it until the end. That is a cruel and heartless ending. Why not make it a lost dog website to help find the dog instead? Not liking it.

Bahahaha!!! Oh my gosh that is sick, but I can't stop laughing! I suppose it's a bit offensive, but sometimes people just need to take a joke.

My initial reaction is the same, although that may change after I sit on it awhile. The ad is not meant to be taken too seriously, and it's obviously giving GoDaddy a lot of attention.