A dog rescued from the Los Angeles River will be up for adoption Thursday if no owner claims him.

“Lucky” was pulled from the river last week by a firefighter who was lowered down to the water from a helicopter, according to NBC 4 News in Los Angeles.

The rescue was captured on aerial video, shown below.

“He is doing great, he has bounced back from his ordeal,” LA Animal Services Director Jan Selder said. “He is an awesome dog. He is potty trained, walks on a leash and puts his head on your lap when you pet his head, which means he had a home.”

Selder described Lucky as a Welsh corgi mix about 6 or 7 years old. 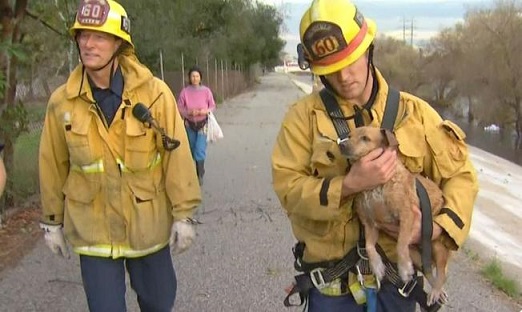 NBC News said the woman who originally called 911 to report Lucky has already requested to adopt him and will have “first rights.”

If she changes her mind or does not arrive at the shelter by 9 a.m. Thursday, someone else will be able to take Lucky home, according to NBC News. If several people come to the shelter (which, come on, they will), the shelter will conduct a “silent auction.”

I’m sure Lucky will have no trouble finding a loving home. The shelter said it has already received hundreds of calls about him.

Here’s the video of Lucky’s rescue.

Image and video from NBC 4 News

Aw, what a good dog! He didn't freak out too bad for the air lift. I think dogs with dramatic rescue stories like that are the lucky ones, in the end. People are lining up to adopt him, but can you imagine if whoever had him last had just dropped him off at the shelter instead of not claiming him (or dropping him in the river, or whatever happened)? I've seen countless dogs that look like that, and he's middle-aged to boot. Not to be morbid, but I'm not sure he would have made it out of the shelter alive.

How can someone not claim the poor pup. How sad some humans are so heartless. Hope he has a wonderful new home.

I know, so sad. Maybe he didn't have an owner or maybe the person somehow is unaware of where to find him.