Home » Meet the wirehaired vizsla, a new breed at Westminster

Two “new” breeds will be competing at the Westminster Kennel Club Dog Show later this month, the wirehaired vizsla and the Coton de Tulear.

I contacted wirehaired vizsla breeder Nancy Edmunds to find out a bit more about these dogs.

She said there are three wirehaired vizslas entered in this year’s show. They are part of the sporting group.

One of the three is a dog she co-owns and goes by the name of Bailey (his full name is AKC CH Vizcaya’s Wired For Sound CM JH). He’s pictured below.

Edmunds said she will be the one showing Bailey at Westminster. 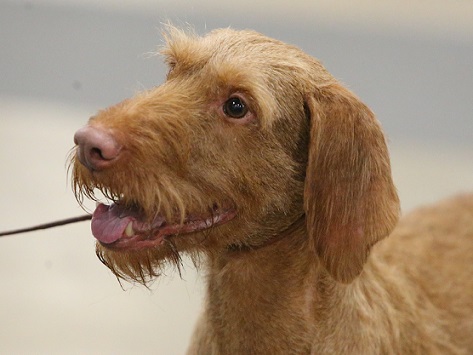 I asked her what makes these dogs unique, and she said it’s “their coat, of course.”

Most of you are probably familiar with the “regular” smooth-coated vizsla (like Ace’s old buddy Lloyd!). But if you’re like me, you had no idea there was a wirehaired version.

[quote_center]”they were bred to withstand the cold winters in Europe and be able to retrieve a bird in the frigid waters.”[/quote_center]

Wirehaired vizslas were developed in Hungary in the 1930s, according to the Wirehaired Vizsla Club of America. The breed is still rare in the United States and worldwide. It was accepted into the American Kennel Club in July 2014.

Edmunds said the dogs have the wiry coat because “they were bred to withstand the cold winters in Europe and be able to retrieve a bird in the frigid waters.”

She considers the dogs intelligent and easy to train. 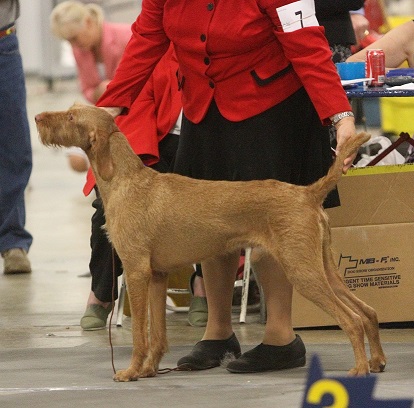 “They are easy to live with and love to be with their people,” she said. “This breed is a wonderful family pet, but loves the opportunity to work at the job they are most comfortable with, and what they were bred to do, hunt fowl.”

As you can see with this pic of a dog named Gavin: 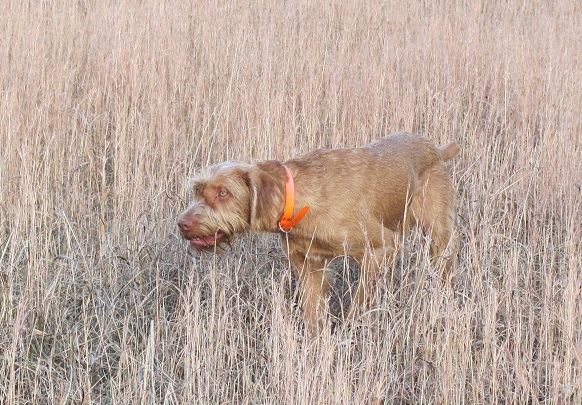 I have to admit I have never even seen a wirehaired vizsla, but as a runner I’m a big fan of the smooth-coated vizslas. I’m sure the wirehaired dogs are just as awesome.

“Vizsla,” by the way, means “quick” or “pointer” in Hungarian, according to the Wirehaired Vizsla Club.

Good luck to Bailey and of course Nancy. I’ll be watching for you on TV!

Had you heard of the wirehaired vizsla before this year?

Nancy Edmunds is a breeder of smooth and wirehaired vizslas. Her web site is Vizcaya Vizslas, and she sent me the above photos of Bailey and Gavin to use for this post.

The other “new” breed, the Coton de Tulear, is a member of the non-sporting group.

What is a Feist Dog Breed? Feist Dogs | Dog Training

Norman is mixed with Vizsla! Believe it or not, his DNA test showed just as much Am Staff as Vizsla (1/4). I think it's where he gets his sensitive side. ;)

I've never known anyone that owned a Vizsla, but there's something really special about them, I think. The wirehaireds are really cute. Interesting article. :)

So neat! Thanks for sharing. I'm drawn to vizslas and weimaraeners specifically because of their sleek coats, but I love these guys for their slight scruffiness. That top photo has great eyebrows and mustache and beard. So much personality. I'm curious if the wirehaired breeds shed more or less than smooth haired?

I like their sleek coats too. I'm not sure which types sheds more. I have a feeling they both shed quite a bit, but if I had to guess I would guess the smooth coated vizslas actually shed more.