“Dog Whisperer” Cesar Millan is being sued by a woman who claims she was attacked by a dog released from Millan’s training center, according to the L.A. Times.

Alison Bitney claims she suffered “disfiguring open wounds, deep muscle and tendon lacerations” and bone fractures from the attack that happened in September, six days after the dog was released from Millan’s Dog Psychology Center, according to the article.

My thought was, why doesn’t she sue the dog’s owner?

From the L.A. Times:

Attorneys for Alison Bitney said in the complaint that she permanently lost feeling and function in her left hand after the attack at the dog owner’s home in Santa Clarita. She is seeking punitive damages.

Jen Woodard, the director of the Dog Psychology Center, said in a statement that Millan never had contact with the dog and never trained the animal.

She said the dog’s owner had removed the pit bull “against the strong advice and objection of his trainer.” After the attack, the pit bull was returned to this center where it was placed in quarantine, Woodard said. 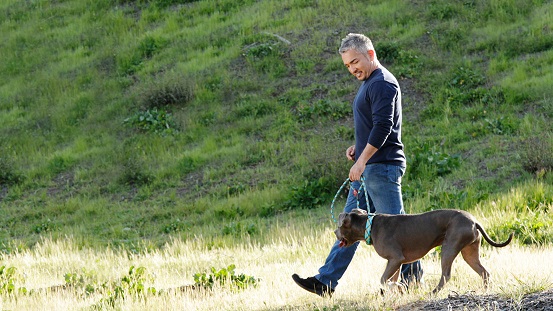 Image from Cesar Millan’s public Facebook page (not the same dog from the story).

When I took a business law class, I read about this case of a pit bull that attacked and killed a child. The attack occurred inside the apartment home of this man who owned the dog. A woman friend came over with her child. While the man and this woman talked in one room, they left the child and this dog alone in another room. But the man is not the one who was sued. Nor was the woman held accountable for leaving her child alone with the dog. The landlord was sued because the apartments had a "no pets" rule that they didn't enforce. In reality, we all know that the landlord was sued because he had the most money. Sounds like the same situation with this story. Cesar Milan is being sued because he has money. The real ones responsible probably don't have much money. I am already pessimistic when it comes to lawyers. Stories like this only validate my feelings.

Oh wow. That example does sound very similar to this. How terrible that the child died.

This just makes her claims completely ludicrous. Instead of being a person who was injured, she comes across as opportunistic.

Why Cesar and not the owner? I think the answer is very simple - money. If you have a choice of whom you're gonna sue, makes sense to choose the one who you can get the most money out of.

I think I had read that the owners weren't able to continue making payments to CM's training center so the dog was released back to the family, before training or rehab was completed. I'm guessing this lady figures there's a better chance to get a settlement from the training center rather than the family. I can't see how this wouldn't be the owner's responsibility.

Seems like a classic example of someone suing who they think they can get the most money out of, not who deserves suing. Still, what an awful thing to happen to someone. Loss of function in a hand? I can't imagine how hard that must be to go through.

And yes, what a terrible thing to be bitten at all, but attacked so badly.