If your dog goes completely nuts out of excitement before a walk, you’re not alone.

And what if you have two dogs? And they’re both excited, basically getting each other more and more worked up?

Heck, what if you have 3 dogs?

By “excited” I mean the dogs might be racing in circles, jumping on you, whining, barking, howling, wrestling each other, grabbing leashes, nipping at you, wiggling as you try to put on their harnesses, wetting themselves or maybe even humping each other out of excitement.

But obviously some people would like to break these habits because not only can it get really old and frustrating, but it’s also dangerous if the dogs are pulling and nipping. Plus, neighbors may not appreciate the barking, especially if you’re in an apartment like I am. 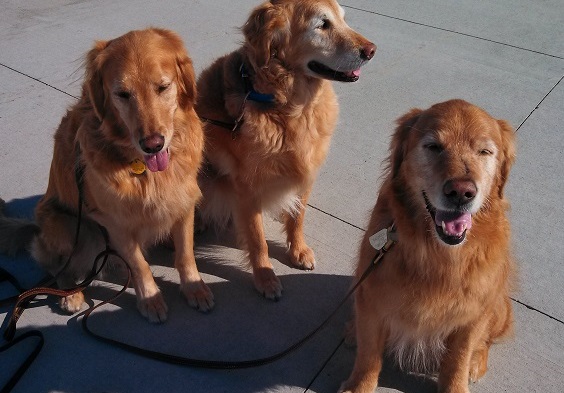 How do I get my dogs to calm down before a walk?

I’m going to share some of my tips as usual, but it would be best if you could weigh in with your own ideas.

First I’ll summarize an email I received explaining a specific problem getting two dogs to calm down before and during a walk.

In this example, the dogs get out for walks every day, but once their owner starts to get ready to take them out, the “mayhem” begins, as she describes it. 🙂

Some clips from her email:

It starts off with the dogs following me upstairs. They both stand outside my bedroom while I’m getting changed. Once I emerge from my room, they both dart down the stairs and wait at the front door. Then the fun part … the harnesses!! It takes me a good 2 to 3 mins to “saddle up” the two dogs. Both have harnesses and if it’s dark out I use LED collars which I also have to put on. This is usually when the whining and moaning begins. Phoebe fights me. Not because she doesn’t want the harness on but because she is too eager to go outside. …

Once I have them all set up and ready to go … the havoc really kicks in then! Chip at this stage is usually ok. She may be excited but she doesn’t jump or bark. Phoebe at this stage won’t sit still. She’s barking (LOUDLY!), whining, moving and just being generally quite uncontrollable. …

If I am walking to my destination, it takes about 45 seconds to walk from my front door to the entrance of my housing estate. Phoebe is whining and barking and pulling etc the ENTIRE time. It’s only once we get into the walk that Phoebe will calm down – usually after 2 mins.

She also describes how the dogs both bark in the car if they know they’re going to one of their usual “fun” destinations, and she is nearly deafened by the whining and barking and howling.

My suggestions for getting dogs to calm down before a walk

Oh where to even begin?

Here are some of my general suggestions for the person above but for anyone else in general, but I definitely do not have a simple solution.

1. If possible, work with the dogs individually.

Usually it’s one dog who is really the problem, and she ends up getting the other/s riled up too. So whenever possible, I would say walk them individually, assuming the other dog does OK when left behind. Put one dog in another room or in a crate and work with the other. Then switch.

Of course, I realize in the real world this is not always possible, so do what you can.

The first goal might be ridiculously basic and easy like getting them to sit and stay quietly for 2 seconds before you even pick up the leashes. That’s progress.

Some other small goals to work on eventually would be to get them to:

Basically if the dogs aren’t calm before heading out the door, they’re not going to be calm once they’re outside either.

3. Desensitize the dogs to picking up the leash.

Besides reinforcing calm behavior before your walks, you could also desensitize the dogs to you picking up the leashes.

And some dogs might have other “triggers” other than the leashes. For example, the dogs in the email example above were triggered by their owner changing clothes. She could try putting on her “walking clothes” or “walking shoes” randomly throughout the day while totally ignoring the dogs.

I know I’m making all of this sound easy. It’s not. It’s stressful and frustrating, and we have to pick and choose and do what we can.

And now I want to hear your ideas!

What other ideas do the rest of you have?

How to get a hyper dog to chill out

Should I teach my dog to heel?

How to stop a dog from crying for attention

Sign up for That Mutt’s email newsletter here. You’ll receive an email about twice a month with training tips, stories, etc.

Help! I started a dog walking business last year in the UK and its going great. I'm taking on new dogs regularly and can be walking anything between one and six dogs, usually with my dog tagging along. I do have one problem dog tho, my own! She's an 11 year old lab, collie, whippet cross thing. She's in great shape for her age and can still do hour long walks with ease. I used to look after my neighbours dogs regularly, so when I was looking for work last year, I had a light bulb moment. She's loving our new routine. But she is proving to be VERY bossy towards the other dogs. At first I thought it was ok, when another dog runs ahead or a couple of the youngsters are chasing each other having a bit of rough play, she will chase after them barking until they stop and then give them a few more barks to tell them off. I thought she was "helping" at first, keeping everyone under control, but now its getting annoying and I think she spoils the other dogs fun. If everyone is walking quietly then its fine. I dont mind her running along with the other dogs if thats what she wants to do even at her age, but I'd rather she wouldn't do it so noisily! She is also barking at the dogs when I am getting them in and out of the car. I have tried keeping her on the lead or calling her back to me when she barks, but it doesn't always work and I cant do either in the car. I have just bought a clix no bark collar begrudgingly. I don't want to have to use it, but I don't know any other way. Lindsay, you are proving to be a great help with your blogs and newsletters, so if you have any suggestions to help me with my noisy mutt, it will be gratefully received.

I became a dog walker last year and for the majority of the time its going great. However I have one problem dog, my own! She's an 11 year old lab collie, whippet cross. Admittedly it has been a bit of a change for her after having me mainly to herself for most of her life (I have looked after neighbours dogs on a regular basis with her before). She loves the new routine and going out with all the other dogs and hates days off! but she is proving to be VERY bossy. If any of the other dogs run off or a couple of the younger ones have a bit of rough play, she will chase after them barking until they stop, then she'll give them a few more barks to let them know their behaviour is not allowed. At first I thought it was great, she kept everyone together for me, but now its getting annoying, all the other dogs are mute compared to her. She's also started barking at the dogs when I am getting them in and out of the car. I have tried various methods, keeping her on the lead or calling her back to me every time she barks. When no one is running ahead or playing a bit rough its all fine and we have a pleasant walk. I have just bought a clix no bark collar, in the hope it might help - she hates being told off, but me just telling her isn't having an effect. I do feel mean tho resorting to it, so if anyone has any better ideas let me know. I dont want to have to leave her at home, she's the reason I started this business, she's fit and healthy for her age and genuinely enjoys our walks with all her new friends (she definitely has favourites) as long as everyone is playing by her rules!

Is the collar helping? I'm thinking maybe with time you won't need to use it anymore but for now can help control her behavior.

Thank you so much for this post Lindsay! I will be trying all of the above! Thankfully once on a walk things calm down but its a big ordeal trying to get out initially!

Of course! Yes, I notice a lot of dogs calm down after about five minutes. It's just the initial excitement!

I'm walking 4 dogs and they get very excited so I don't egg it on by repeating that we're going for a walk in that happy, excited voice. And I maintain a calm energy - instead of rushing around, I calmly walk, get the dogs harnessed and then we leave the house.

They still run to the car, but they settle down once everyone is inside.

I keep all leashes in my car.

Do you walk them all together by yourself sometimes?

Our guys are surprisingly very patient before we go for a walk. I always admire that knowing how excited they are. Outside? Call for a treat always works.