Dog lovers have raised more than $9,000 so far to help a German shorthaired pointer named Ozzy who was hit by a car.

After the pointer was hit by a car and left in the road in Fort Mill, S.C., a Good Samaritan stopped to help, according to NBC Charlotte (N.C.).

The Good Samaritan brought the dog to a Charlotte vet and learned the dog had series injuries, NBC said.

Medical bills are estimated to reach $9,000 to repair a broken front leg and at least one of his dislocated hind legs, plus other injuries.

The Good Samaritan contacted Southeast German Shorthaired Pointer Rescue and also set up a GoFundMe page to raise money for the dog’s bills, according to NBC. 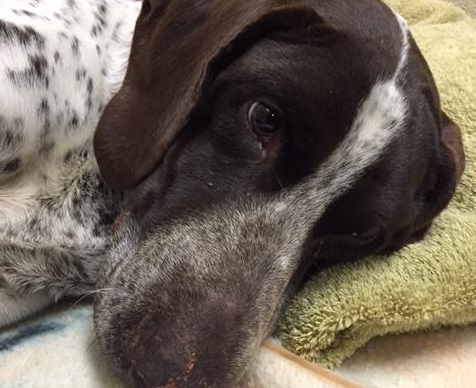 Word of Ozzy’s fight spread quickly on social media and in two days more than $7,500 was raised.

Carol and Randy from Seattle, Washington donated $100 with the message “With lots of love and prayers for Ozzy all the way from Seattle.”

A message from Mary Lou said, “Prayers for this sweet boy from Oregon. Will be so relieved when his surgery is over and he can start to get the life he deserves. Thanks to the heroes who saved him.”

Southeast German Shorthaired Pointer Rescue hasn’t been able to find the dog’s owner, but in the meantime they named him Ozzy. Oz means strong in Hebrew.

Ozzy is estimated to be about 2 years old and is expected to make a full recovery, according to NBC.

Have you ever made a donation to help a dog you didn’t even know?