John Unger and his dog Schoep became famous three years ago when a photo of the pair in Lake Superior went viral.

Schoep, who died in 2013, had loved the water but arthritis made it hard for him to swim or walk.

Unger would stand in the water and hold Schoep against his chest, sometimes for hours, according to USA Today and King 5 News.

You may remember seeing the sweet photos of the two like this one: 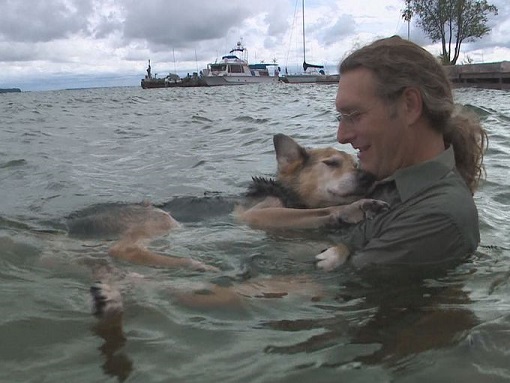 Well, Unger announced on his Facebook page this week that he has adopted another dog, a big, black dog named Bear. He wrote:

I am whole again…

Ladies and Gentlemen – This Is BEAR!

He posted this photo, calling Bear a 70-pound Akita/shepherd/Labrador mix, adopted from the Northwoods Humane Society in Hayward, Wis. 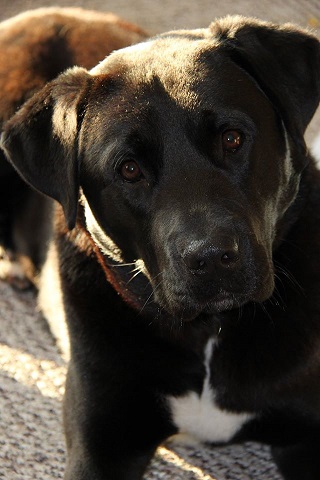 From King 5 News in Seattle:

A few days ago several dogs were surrendered to the Northwoods Humane Society. Among them was one-year-old Bear. Older dogs and black dogs like Bear often have trouble finding new homes, according to Kim Molitor, who works for the shelter. But a suitor was already at the front door.

“I was like cool. He’s like a surfer dude from California. He’s going to get along with all the dogs,” Molitor said after the long-haired Unger walked in.

Molitor had no idea who the “long-haired surfer dude” was until a co-worker recognized the name.

“I got chills. I couldn’t’ believe it. He’s in the water with the dog and it was beautiful,” Molitor said.

Just as beautiful was the moment Unger met Bear.

“It was just unison. It was just you know, in love from the moment they said hello to each other,” Molitor said.

Did you follow the story of Schoep a few years ago?

That's awesome! Very cool looking dog. I love that picture, not one you forget!

I saw the pictures and was very touched. I'm so happy they have found each other.

I followed the story of Scheop and John, and continue to follow the Facebook page. I cried when Scheop passed, and am tickled he has a new dog.

We saw this on the news, wonderful for them both!

I remember that photo - so emotional and moving, especially as someone who has watched their old arthritic dog suffer. Glad to see he is bringing a lucky new dog into his life.