When Can A Puppy Go Running With Me?

Home » When Can A Puppy Go Running With Me?

It depends on the puppy, but generally puppies should be able to start running once they are between 8 and 12 months old.

For larger and giant breeds, you may want to wait until they are 18 months, which is the age thrown around the most online.

And some breeds aren’t really built for much running ever. I mean, come on.

The reason to be somewhat cautious about running with a puppy, especially larger breeds, is because their bones are still developing and you don’t want to damage their joints.

Dog owners should do their own research and make their own decisions about running with their own dogs or puppies. What’s best for one is not best for all.

Personally, I’m more concerned for the under-exercised, overweight dogs. Many of those dogs have joint issues and they’re not even getting out for walks. So, go figure.

Dogs that get to do any running at all are the lucky ones, in my opinion.

What do you think? When can a puppy go running?

For those of you who run with their dogs, I am interested in your thoughts:

My running experience – when to start running with a puppy

I own a dog running business where I take dogs on 30- or 60-minute running sessions. I stopped keeping track of my running miles with dogs at my side once I passed 10,000 miles a few years ago.

I used to run with my Lab mix Ace when he was younger, but he is now retired from running. He just turned 9 years old, and I started running with him right away when I adopted him at 12 months.

A veterinarian’s opinion – at what age can a puppy go running?

I like the rule of thumb given below by Dr. Thomas Watson, a veterinarian in Charlotte, N.C.

I interviewed him for my post on running long distance with a dog.

Once a dog is around 6 months old, his musculoskeletal system has grown to about 75 to 80 percent of his adult size, Watson said.

Based on this, he gave some general recommendations on when he’s comfortable taking a dog running. These are based on the dog’s estimated size at maturity.

Dogs under 60 pounds: Start running when the pup is 6 to 8 months old.

This is just a rule of thumb from one veterinarian who runs with his dogs, but I like his advice.

I would also add that a lot of the dogs over 100 pounds (not all) should generally run for shorter distances, even as adults. Maybe just 1 to 3 miles, if that.

Speed is a factor – Is the dog even running?

On a typical running session, I cover up to about 5 miles with each dog. We go at such a slow pace, so the dog is actually “trotting” at my side vs. actually running. It’s a fast walk for the dog, a slow run for me.

This is much different than, say, someone who runs at a 6-minute-per-mile pace or someone who wants to take a dog biking or rollerblading.

These are all great options, but you just need to take the intensity of the workout into consideration.

Starting out at a 10-minute-per-mile pace with a puppy might be ideal. A slow “run” is probably not going to damage a pup’s joints.

Then, if it seems right for your dog, you could eventually pick up the pace or add Rollerblading once the pup has matured. No need for that level of intensity right away.

The puppy’s paw pads could get sore while running

The most common injury I see while running with dogs, especially young dogs, is scuffed paw pads.

It takes time for a dog to build up strong, calloused paws. If she’s not used to running or walking on pavement and concrete, she might skin up her feet a bit.

To prevent this, slowly begin taking your puppy on walks and runs and stop to check her paws every 10 minutes or so until you know her feet have “toughened up.”

If her paws are bleeding a little, it’s likely no big deal. Just give her a day or two to rest and they will probably heal up on their own.

Now I want to hear from the rest of you.

When do you think it’s OK to start running with a puppy?

Tips for running with a dog

Winter running with a dog

Start a business running with dogs

Can I walk my puppy before she’s had her shots? 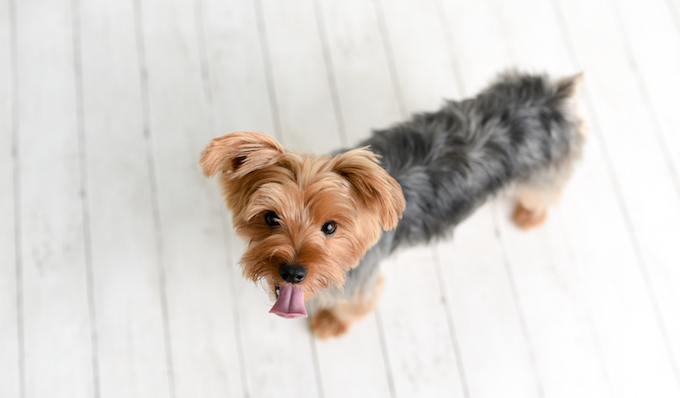 Next
My Dog Pees Next to the Pee Pad Instead of on the Pad
Click here to cancel reply.

My last dog was a ridgeback and I started wlking/hiking/trotting with her when she was 3 months. She just passed away 3 months ago. We ponied right up and got a 8 week old Great Pyrenees German Shepard mix who is now 3 months old and I have been taking her on 1.75 mile walking/running/hiling loops on dirt path and she is doing fine. After reading this article I will prob back off a little...

I guess it really comes down to one question: When is a dog not running while I am running ? As mentioned earlier your puppy may not actually be running at all when you are jogging especially if its a larger breed with longer legs. I have a Norwegian Elkhound / Collie mix and he's 5mths weighing in at 46lbs. When I jog at a 10 or 11min mile pace he's just walking fast. I haven't tried it over any distance yet I just did it for a couple of hundred yards the other day so at a slow pace intensity isn't the issue its distance and surface so add to that running on trail and how far should I go ? my guess is no further than say 3 miles or 30 minutes, thoughts anyone?

I think you're exactly right. I have a weimaraner and I started running with him slowly for about a mile when he was 6 months old (11 min mile pace). He weighed about 45 pounds then. I was probably a little more conservative than some. I gradually increased his distance up to about 5 miles. Then, once he was 18 months I started doing up to 10 miles. Today he's 2 and doing great. We do about 11 miles once a week and a few shorter runs a few times a week.

Our Best Tips for Running With Your Dog - Fit Approach

[…] Understand your dog's limits and start by training 10-20 minutes a few times each week. You can start running with your dog when they are between 6-12 months old. For larger dogs, you may want to wait until they are 18 months […]

The surface you run on makes a big difference. The wolf pack is running on dirt, which is a lot easier on the joints than pavement or concrete. Also chances are they aren't constantly moving at the same pace, which is what we humans tend to do when we go for a run. The wolves are likely starting and stopping, slowing down, speeding up, depending on what they're chasing.

I'm not worried about it.

Just read an article on Outside Magazine's website about endurance running with your dog and the vet they interviewed had an opinion I haven't heard much as he compared it to wolf packs: "That’s a common myth," says Andersen. "I see people not running with their young dogs because they have been told not to, but then they’ll play high-intensity fetch instead, which is way more impact and potentially damaging on their joints." Instead of high-intensity ball games with a puppy, he recommends walking, hiking, and, when they reach a few months old, going on easy runs under a mile. "By three or four months," Andersen notes, "wolf pups start traveling with the pack on short hunting trips. They are also doing a lot of play, chase, and exploring with the adults and with littermates. By six months, the pups are traveling with the adults on longer hunting trips taking them many miles from their homes."

We don't run dogs for our clients until they are 12mo unless they get vet approval, though.

I read that article too and enjoyed it. Good info and nice to hear someone encouraging activity for young dogs.