Note: This is a sponsored post. Read more to learn how you can win an Assisi Loop for your dog, cat or other pet.

The Loop uses a targeted pulsed electromagnetic field to reduce inflammation, speed the healing process and decrease pain in dogs and other animals, according to Assisi Animal Health, which developed the product.

I use the Loop for my 9-year-old Lab mix Ace to help decrease pain in his shoulder after running and playing at the dog beach. I simply place the Loop over my dog’s shoulder for 15 minutes.

You can read more about my experience with the Loop here, but today I’m going to share a couple of other real-life examples of other dogs who have benefited from the Loop.

Examples of dogs benefiting from the Loop 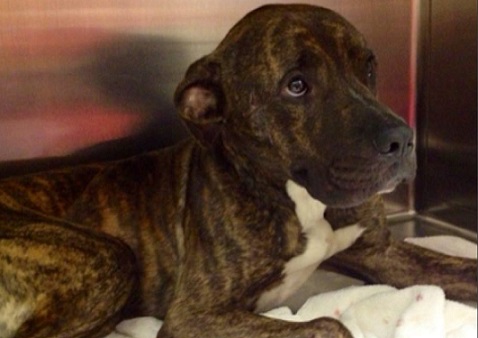 Petey is a 2-year-old pitbull who is currently up for adoption with Bell Road Animal Medical Center in Montgomery, Ala.

He was treated by Dr. Eric Lewis at the center for a wound on his front paw after he was picked up as a stray. 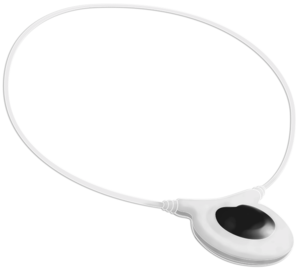 Lewis shared Petey’s story with Assisi Animal Health because he believed the Loop played an important role in the dog’s recovery. You can read the full story here.

When Petey first arrived at the center, his wound was deep enough that some of his tendons were exposed and Lewis thought the wound was 3 to 5 days old.

“Our best guess is that Petey was in a car or truck with an open window and jumped out,” Lewis wrote.

Around the fourth day of Petey’s care, Lewis said they started using the Assisi Loop in addition to a therapy laser. 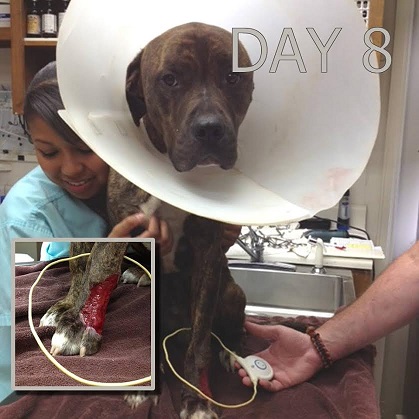 The Assisi Loop certainly seemed to have sped up the healing process, Lewis wrote. He said the wound healed in at least 30 percent less time than he thought it would.

I asked him how Petey is doing today, and he said “Petey is fully recovered with no problems associated with the injury.”

Now all Petey needs is a home.

Lewis said Petey has an outgoing personality and plays well with other dogs in a doggy daycare group every day.

Anyone interested in adopting Petey can contact Bell Road Animal Medical Center at (334) 279-9100 or get in touch through Facebook. Lewis said he has used the Loop with a couple of other patients since Petey and had “similar results.”

Linda Watkins uses the Assisi Loop for her 13-year-old English setter mix named Splatter because of his arthritic pain.

“Splatter has weakness in his rear legs, partially due to moderate to severe arthritis in his hips and knees,” she said. “He also has issues with his right rear leg due to an ACL repair when he was six years old. He has a metal plate in that knee.”

She sent me this picture of Splatter and said she believes the Loop has helped decrease her dog’s level of pain. 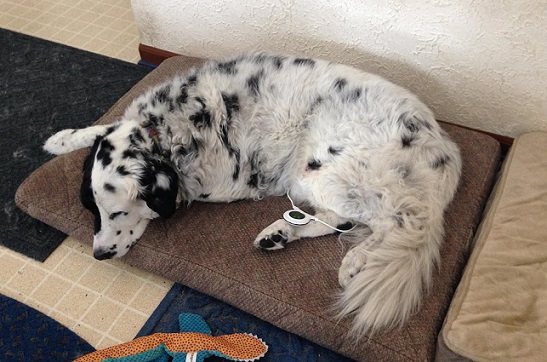 “He is also on anti-inflammatory drugs and in rehab therapy,” she said. “In addition, he sees, periodically, a veterinary chiropractor and massage therapist.”

She said she plans to continue using the Loop with Splatter for as long as needed.

For others interested in the product, she said it’s easy to use, non-invasive and has no side effects, which is what I like about the product as well.

Bob the Chihuahua – recovery after surgery 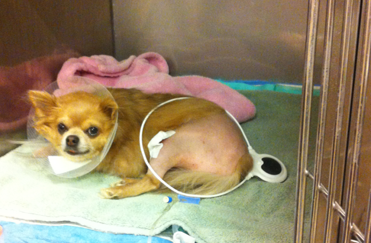 Bob is a 3-year-old long-haired Chihuahua who had surgery on both knee caps simultaneously to prevent them from “popping” out of place.

His owner, David Mazzoni, is a hydrotherapist at Veterinary Specialty Center of Deleware, where Bob had the surgery. Mazzoni shared Bob’s story with Assisi, and you can read the full story here. 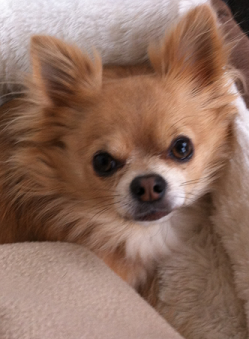 He wrote that he started using the Assisi Loop with Bob on day 2 following the surgery. In addition, Bob also received electrical stimulation, laser therapy and manual therapy.

In the first week following the surgery, Mazzoni wrote how Bob recovered remarkably well and his therapy was limited to passive range of motion therapy two times per day, plus the Assisi Loop.

Bob’s surgeon and others commented repeatedly how remarkably well Bob had been recovering, Mazzoni said. After the first week, any signs of discomfort were non-existent and Bob was able to fully bear his weight and go for longer walks.

And as for Bob today:

“Bob has continued to do exceptionally well with his recovery,” Mazzoni wrote. “He is now back to normal activity with no restrictions.”

How you can win an Assisi Loop for your dog

Assisi Animal Health is giving away a free Loop to one lucky reader of That Mutt.

To enter the giveaway:

Leave a comment that indicates why you think your pet could potentially benefit from the Assisi Loop.

I will choose a winner at random on Thursday March 19. Must have a U.S. mailing address to win and be 18 or older. The winner will be required to obtain a prescription from his or her pet’s vet prior to receiving the Loop. *Congrats Michelle!

The cost is $269 and you will need a prescription from your dog’s vet.

Do you think your dog or cat would benefit from the Assisi Loop?

Note: I received a free Loop and compensation in exchange for writing about the Loop.

My dog belle is epileptic but one of the side effects happen to be sores on her paw. We have tried everything but they keep popping up and I'm hoping this would help my sweet little sheltie!

It might! It seems to have helped my dog's paw recover after he had a broken nail and an infection.

I won another give away recently so I am not sure I qualify for this one. If Jake wasn't already on a once a month laser treatment plan I would definitely want to try this on him. Lewis, my sister in laws dog, is having difficulties with his back hips. I would love to see if this would benefit him. If I still qualify and win, I would give it to Lewis. If Mary wasn't interested, I would then pass along to Michelle as I love Goldens! :-)

This looks really great! I would love to win this for Marbury who has a knee injury. I am def going to talk to my vet about this. I do not want to do the TPLO surgery on Marbury bc of potential complications. The Assisi Loop looks very promising.

I hope you're able to give the Loop a try with Marbury. Sorry to hear of his injury. I'm sure that's difficult to deal with.

Dozer will be 14 in May and is having some back pain and trouble getting comfortable and getting up . I would love to see if The Loop could help him stay active and be in less pain.

Sorry to hear of Dozer's back pain. I hope you find something that can give him some relief, whether it's the Loop or something else.

I have three senior golden retrievers (all 12). They all seem to have varying degrees of arthritis in their hips and one has known issues with hip dysplasia. We have resorted to keeping them on glucosamine and rimadyl, otherwise two of them (Zoe and Drake) struggle to go up steps. The third dog, Zeke, is the one with hip dysplasia, but he is also the one of the three who continues to act like he's two! He loves to retrieve and run - he is a busy guy. Unfortunately, he is held back at times by his painful hips. I would love to try out the Loop to see if it makes a difference for him, so he can run as long as his heart desires. It would also be great if it helped the others so we could decrease the regular doses of rimadyl.

Aww, those three are so sweet! Boy do I miss them!