A greyhound rescue in Idaho is trying to ban a wiener dog race put on by a local Lions club.

This isn’t a joke.

The rescue group is taking things to a whole new level of crazy.

There are animals out there who are truly suffering, but this group is trying to ban a fun, family event.

From KBOI in Boise:

The group said the event breaks a law dating back to 1996.

“The statute for dog racing is very specific and clear,” said Virginia McKean, co-founder of Greyhound Rescue of Idaho. “…Any live dog races in the state are illegal.”

KBOI 2News contacted the Boise Host Lions group for its response. No one would go on camera, but the group sent a statement:

“Our event is a fun run for Dachshund family pets over a short distance, less than 50 feet. We believe the Idaho Racing Act does prohibit dog racing where the pari-mutuel system of wagering is used. There is no betting on dogs at our event.”

Here’s a picture from last year’s race, posted on the event’s Facebook page. (The page appears to have been taken down now.) 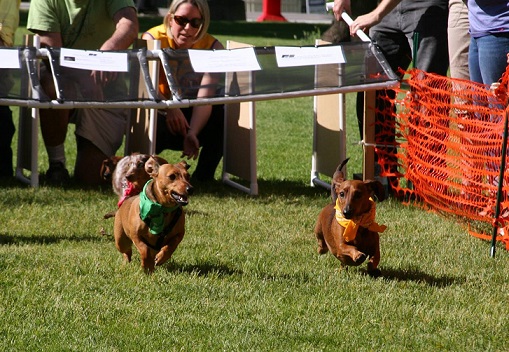 The Boise Host Lions said in an AP article that its races are for family pets and the distances are less than 50 feet. The first place finisher wins $100.

Here’s a flier for the event: 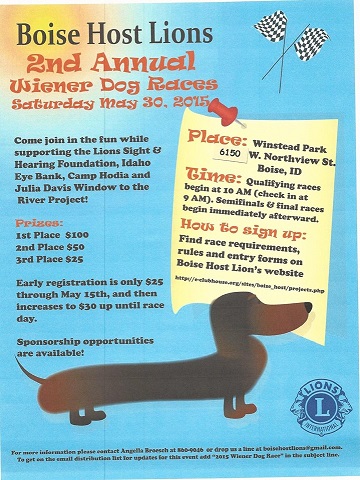 I checked out Greyhond Rescue of Idaho’s Facebook page and on it, the group posted, “We, GRI do not wish for anyone to get the idea that any dog racing is fun and harmless.”

I get that greyhound racing can be a terrible thing, but come on. Wiener dog races?

Do we also need to ban dog agility?

My dog raced other dogs back in the day to get the fastest time on the agility course. Are they going to come after agility and flyball teams next? In flyball, dogs compete in relay races against each other.

Wiener dog races are fun, family events that typically raise money for a good cause.

For example, the “Wienerschnitzel Wiener Nationals” at the Los Alamitos race track in California raises money annually for the Seal Beach Animal Care Center, a nonprofit that finds homes for homeless pets in Orange County. Last year’s event raised more than $15,000 for the center through tickets and T-shirt sales.

We better ban that event too!

Here’s an example of another wiener dog race from 2010 (link to video). The dogs race a whole 25 feet or so. Ban the madness!

Can we please help the dogs, such as many greyhounds, that are truly suffering? (There are plenty.)

I think the greyhound rescue group would be better off educating people about actual greyhound racing than worrying about dachshunds having fun.

What do you think? Is this group a little nuts or are they being reasonable?

Do you think we should ban wiener dog races?

No it should not be banned. I just raced my Chihuahua in his first race. He had fun, I had fun. There was no betting, and it also was for a good cause.

Um...they look like they're having a lot of fun. And they just ran like 10 feet. It's probably good for their fat bellies...lol.

The gambling aspect of Greyhound races is what has turned the sport into a despicable one. It has turned what could be a fun event into one that has so much pressure that dog owners are making training intense and cruel, overbreeding females and renting out studs, and getting rid of the dogs that can't race. The same could be applied to horse races. If people just raced horses without the added element of gambling, it could actually be a safe and fun event. Horses like to run. Without gambling, there would be no pressure for them to win. There would be no breeding pressures. And there would be no reason to kill off a horse that can no longer race or breed.

With that being said, I agree that this rescue group is taking it too far. The real issues here are caused by the gambling aspect. Obviously this Wiener race doesn't involve gambling. I doubt owners put these dogs through intense training or breed them afterwards for next year's race. And I bet they will take care of their dogs for the rest of their lives, even when they get too old to race.

This seems pretty backwards. I don't have any experience with wiener dogs, but I see these races at events annually and I can't imagine that they're dangerous. We live in a huge dog loving community and someone would have spoken out long ago.