Battery lasts for up to one year, no monthly fees

Note: I’ve partnered with Where’s Nellie to bring you this post.

We’ve all been there.

You open the back door to call your dog inside, and she’s not there. You yell and call her name, and nothing.

Or maybe you’re out walking and Fido slips out of his collar and takes off after a squirrel.

You try to chase after him, but in just a few seconds he’s already out of sight.

This happened to me, and it left me in a panic. I didn’t even know which way to start running.

This post is about a new technology called Where’s Nellie that allows dog owners to instantly find their lost or stolen dogs.

If you ever lose your dog, you can just open the WheresNellie App and within a few minutes you see your dog’s exact location in real time on your phone’s map.

Where’s Nellie is currently seeking $100,000 on Kickstarter to help with manufacturing costs.

Learn more about the project here or watch the Where’s Nellie Kickstarter video below.

Where’s Nellie was built to be easy to use and to work when you need it, according to its Kickstarter page.

You simply attach the Nellie Beacon to your dog’s collar and plug the Nellie Base into a wall. After that, you won’t have to think about either device again for another year.

“Together, the Nellie Beacon and Base create a virtual leash that tethers your dog to a known location,” according to Where’s Nellie.

It uses a long-range radio technology to create a virtual “geo leash” area around the Base with a radius of up to 2 miles. If your dog begins to leave the “geo leash” area, the Base notifies you right away and sends your dog’s location.

Because the Nellie Beacon uses a GPS radio, your dog can be pinpointed within 10 feet, according to the project’s Kickstarter page.

The Nellie Base can be powered from any wall outlet in your home, from any USB charger or from your car. It also comes with a rechargeable battery enabling on-the-go use.

Long-lasting battery for peace of mind 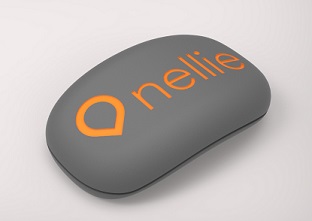 While there are currently other GPS-tracking options available for finding lost pets, the batteries on those products need to be charged or replaced every few days,

How you can win a Where’s Nellie – Four winners total

I will be choosing 1 winner at random every week for the next four weeks.

Answer any of the following four questions about Where’s Nellie. I will post one question per week over the next four weeks. Leave your answers in the comments.

You have the opportunity to enter up to four times by leaving up to four comments. Anyone 18 or older can enter.

Question 1: Have you ever been in a situation where Where’s Nellie could’ve helped find your dog?

Q2: Where/when do you allow your dog off leash?

Q3: Has your dog ever slipped out of his collar or harness?

Q4: How reliably does your dog come when called?

*Unfortunately Where’s Nellie did not reach its Kickstarter goal.

Would you like to try Where’s Nellie for your dog? Answer any of the above questions and you could be one of four winners.

My granddaughter is living with us and she now has a pit/boxer. He is only one year old. He is very hyper and if he were to get out I feel we might not find him. I think a device like this would be just what we could use. Can they be purchased?

Question 1: Have you ever been in a situation where Where’s Nellie could’ve helped find your dog? yes, about a week and a half ago mom came over and Okami slipped out between mom and the door frame, which ended up with her hurting her left front paw.

Q2: Where/when do you allow your dog off leash? normally I only allow her off-leash at the off-leash dog park.

Q3: Has your dog ever slipped out of his collar or harness? unfortunately with her old collar one of those plastic clasp buckle collars she hit the end of the drop line hard enough to pop it. I since replaced that collar with a marten gale style collar

Q4: How reliably does your dog come when called? not very :( she is an ~2 year old husky I "rescued" from the local shelter in January, so one of her issues is "selective listening"

I let my dog Quinn run off leash in the bayous around my house, we took a newish route one day and I came out from a wooded area and she was gone. I searched everywhere for what felt like hours. Turns out she had gone back to the point where we last saw eachother about a quarter mile back and had been waiting in the shade! I was so relieved, and you can bet I don't let her get out of my sight like that again...where's Nellie would have been great right then.

Oh my gosh. So scary. I'm glad she knew to just wait for you!

How reliably does she come when called? She's about 80%. Not perfect, worse if she's in a familiar place.

My Dalmatian has gotten our of her collar several times. Her pointy head makes it almost impossible to have a collar tight enough without cutting off her air! Most of the time though, she immediately sits and waits for me to put the collar back on.

She did that the first day we got her, years ago, and happily ran all over the yard, but did not leave the yard, so it was only a little scare at the time.

Oh thankfully she was safe that first time she got away! Scary!

OMG how can a dog have a normal neck and a little pin head that she gets out of collars! I also had to go baa I to good old fashioned buckle collars no push clasp Oy vey!