Does Your Dog Really Know the Leave It Command?

Home » Does Your Dog Really Know the Leave It Command?

Have you ever watched helplessly as your dog swallowed something disgusting or dangerous?

Like, you’re out at a park and he’s suddenly crunching on a dead bird?

Or, you’re out walking and before you know it your puppy has a cigarette butt in her mouth!

This is where the “Leave It” command (meaning, Do Not Touch!) comes in handy and can even save a dog’s life.

I thought my dog understood “leave it,” but just the other day we were out walking, and before I had a chance to stop him, he’d picked up and swallowed what I *think* was part of a sandwich.

My attempts to firmly tell him “leave it!” were ignored.

And after he’d swallowed his find in one gulp, he looked at me and wagged his tail.

“Oh? Were you saying something?”

It pissed me off.

But mostly, I was worried my dog had eaten something unsafe.

I realized I need to work on a more-solid “leave it” command with Ace so he’ll listen to me when it matters. (“Drop” is another good one.) 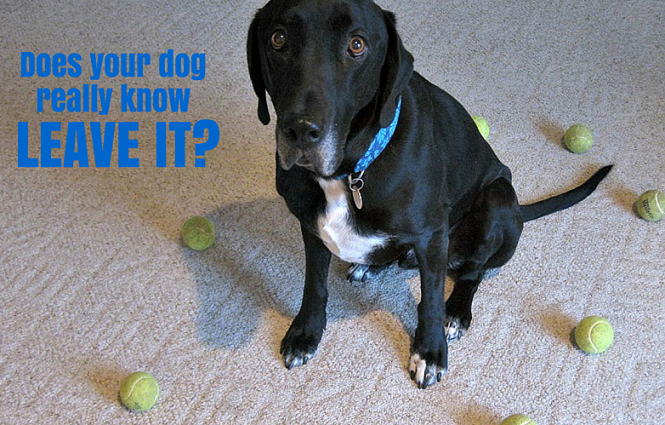 Sure, he’ll obey “leave it” in the living room, but not necessarily in “real world” scenarios such as if he’s off leash and about to eat or roll on a dead fish.

With this post, I thought I’d briefly go over how to teach a dog to “leave it.” Then I’ll cover some ideas on how to get to a higher level of training.

How to teach your dog the command ‘leave it’

There is more than one way to teach a dog “leave it,” but here’s what I did:

For my retrieving nut, a stack of tennis balls is a good challenge. 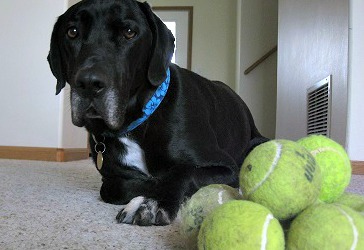 Challenging your dog with leave it

Since my dog will “leave it” for anything in our living room but apparently not in all real world situations, I came up with these ideas for continuing to work on this command:

1. Practice “leave it” in different environments – every room of the house, outside in the yard, on walks, during play, etc.

2. Practice “leave it” when your dog is excited and less likely to “listen.” Like, in the middle of play. Just make sure you’re able to follow through and block your dog if necessary.

3. Avoid using “leave it” if you know your dog won’t obey.

4. Practice “leave it” on walks by placing high-valued items on the ground in advance. Weird, how’d that sandwich get there? 🙂 And of course, reward with something just as good!

5. Practice “leave it” with real-world items you are most concerned about. You know, like garbage, rabbit poop, manure, dead fish. Yep, you might have to actually seek out some disgusting stuff!

6. If it’s safe, reward your dog with the original item! I believe Dr. Patricia McConnell wrote about this in one of her books. She had asked her dog Tulip to drop a dead squirrel, and the dog obeyed! So McConnell rewarded her dog by letting her have the dead squirrel! Talk about positive reinforcement!

7. Get in the habit of rewarding with something better so your dog will automatically “leave it” to get a potential reward. “Good boy!” just won’t cut it sometimes.

What are some good tips or tricks for reinforcing the “leave it” command?

What is something disgusting your dog has eaten or rolled in lately?

Check back tomorrow for my post on using “leave it” to mean “ignore that other dog.” Read it here!

How to stop a dog’s possessiveness

How to teach a dog to drop something

My dog is possessive of toys at the dog park

Previous
Treat vs. Poison - Common Snacks That May Be Harmful for Your Dog
Next
Do You Use 'Leave It' to Get Your Dog to Ignore Other Dogs?
Click here to cancel reply.

yes, i definitely need to work on this with my girls. however, when they hear no, uh uh, they usually stop and leave it. my problem is that they take treats from my oldest gal, who is very slow, deaf and almost blind. so i have to watch when i give out the treats. i get very nervous abt this when i have dropped a pill, or something they should not eat. i stomp my feet and say no loudly. i have tried the leave it but they dont seem to get the concept as well. so we need work on this. i have tried working on this with treats and sometimes they listen but not always. i like drop better, they seem to do better with 1 syllable words

Thanks for sharing this great topic and advices. I am a novice in dog training; Sean's sayings are what I use "... in favor of default = no and if you try to pick something up from the ground being a no."

I am wondering that increasing the voice volume and pitch like a military drill seargent does when saying "leave it" or "no" might also make a difference; I am also imagining that if the voice is dramatic enough, like calling for help in an emergency or like expressing to the dog that you are in danger, the dog might have your attention.

sort of: with that said dogs are really good at getting tone and assigning meaning to it.

the other is a kind of click of the tongue on a falling tone as a more mild no or don't do that.

its subtle, and quick so after a while you kind of to it automatically and subconsciously.

its kind of like Okami has a tendency to "nibble" on me and other people when she gets too nippy I say "ouch" which she has learned means stop, that's too hard, she does even when she looks confused because she "knows" she didn't bite hard enough to break skin or anything.

somewhere around 2 weeks to a month ago I was taking Okami for a walk with my mom, and on our way home at the corner there was a dead bird on the ground (I think it was a bluejay or similar) Okami noticed it first and grabbed it, I told her no, drop it. and to my somewhat surprise she immediately dropped it and looked at me. with a sort of wait why can't I have that expression, then walked on. of course it never got cleaned up, so she occasionally tries to grab it again.

Like others have said my Bailey is a total 'Star' with the leave it command indoors. Let loose and faced with that ultimate delicacy fox poo is another story completely.

I think that as for helpful tips you pretty much covered it. There is a big difference between teaching a cue and proofing a cue. That comes to about any command. Like, "seriously, you want me to leave this perfectly good chunk of sandwich?" :-)