Home » What Would You Think If Shelters Did Not Identify Dogs By Breed?

I read a couple of blog posts recently about an animal shelter that said it removed all breed labels from its dogs’ kennel cards and Facebook posts.

When adopters look at the dogs available at the Fairfax County (Va.) Animal Shelter, the dogs are not labeled as “Lab mix” or “pitbull mix” or “dachshund.”

Instead, the dogs are identified by their actual personalities, behaviors, energy levels, size, age, friendliness, etc.

The reasoning is when you remove breed labels you’re looking at dogs as individuals first and breed second.

According to the Fairfax County Animal Shelter, removing breed labels has been a successful experiment, and the group has seen a significant increase in adoptions. 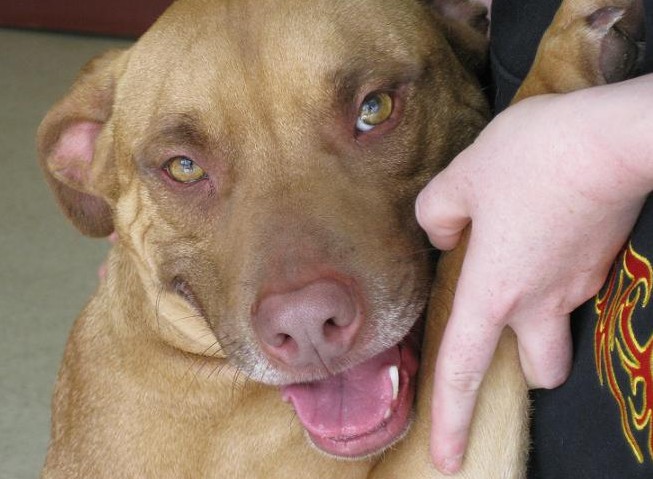 What do the rest of you think about removing breed labels at shelters?

Personally, I love the idea.

I’m not sure if it’s the right way to go, but it’s something shelters and rescues could at least consider.

Most dogs are mutts, and everyone will always have a different opinion on what a dog is mixed with. The labels we give mixed-breed dogs are usually just someone’s guess.

Even within a breed or breed mix, every dog is an individual. I’ve written about this many times. You can’t predict a dog’s behavior or personality based on breed alone.

Most adopters DO want to know what kind of breed mix they’re getting. I certainly would.

But removing the dog’s breed opens up more opportunities for discussions between shelter volunteers and potential adopters because more people will be asking questions.

This is an opportunity for shelter volunteers to talk about the dogs’ personalities first and breed second. Ideally, this will lead to more positive outcomes for the dogs – getting them adopted vs. killing them.

Adopter: “What kind of dog is Jasper?”

Shelter volunteer: “Oh, isn’t he cute? Would you like to pet him? He’s definitely a mix. He’s great with other dogs and loves to play fetch. We think he might be a mix of boxer or pitbull. What do you think?”

Adopter: “I think he’s part vizsla. That’s a vizsla mix. Can I take him for a short walk?”

Shelter volunteer: “You might be right! Yes, I’ll put his leash on and we can take him for a walk. He seems to really like you!”

I can see why adopters could feel angry or like they’re being “tricked” into adopting a certain type of dog.

I read another blog where a couple went to a different shelter looking to adopt, and the staff there had also removed breed labels. They labeled all the dogs as mutts or “American Shelter Dogs.”

There’s nothing wrong with that, but when the couple asked about the breeds of the dogs, the staff members were cold and unhelpful, at least according to the couple.

The staff refused to offer any guesses on the dogs’ breeds, which was frustrating for the couple. They simply wanted to know what kind of dog they would be getting, which is a fair thing to ask.

Instead of taking this opportunity to talk about the dogs’ personalities and potential breeds, the staff got irritated that they were asking such questions.

In this case, the couple walked out of the shelter without a dog and felt prompted to write a blog post about their negative experience at the shelter.

They ended up going to a breeder and got a purebred puppy instead.

This is just one example, but it shows there obviously needs to be a balance. A shelter is never going to please every potential adopter, but the workers do need to have awesome marketing skills and positive attitudes. It should not be so difficult to adopt a dog.

Leaving out the ‘pitbull’ label

The rescue I work with rarely uses “pitbull” on its breed labels. I’m not sure if this is intentional, but it seems that way.

Leaving out “pitbull” and calling a dog a “Lab mix” or a “boxer mix” does seem to help get the dogs adopted.

Most adopters love pitbulls or are indifferent to them, but some apartment complexes and insurance companies still ban “pitbulls” which makes them a little harder to get adopted.

Another factor is to make sure adopters are aware of potential discrimination against the dogs they adopt, even when breed is removed.

If a purebred or mixed breed dog looks like a “pitbull” to someone, the dog and the owner could unfortunately still be banned from some apartments, dog daycares, insurance policies, etc. This is changing, but it’s still an unfortunate obstacle for some.

I’m not sure if removing breed labels from shelter dogs’ bios is part of the solution, but it’s an idea I’m open to. I think it’s worth discussing, and I’m curious what the rest of you think.

Do you think removing dog breeds from kennel cards and bios is a good idea?

Do you think it would have a positive or negative outcome in your area?

As a newbie dog adopter two years ago, I very nearly adopted a pit mix who was labelled as a dalmatian/lab mix by the rescue. She had a great personality and I fell in love with her for the week I had her. Then the problems arose -- she looked like a pit mix, and "dog people" knew that. Landlord was pissed. Daycare where we wanted to take her wouldn't accept pits. We knew potential landlords in the future would turn us down. So we were forced to return her. I have never been so heartbroken in my life and I blame the rescue that mislabeled the poor dog just so she would get adopted out. They took advantage of our naivety. Yeah, we should've known what pits looked like, but we just trusted the rescue would respect our wishes. They knew we weren't allowed to have pits. She was a great dog, but she wasn't for us and they would've saved us all a lot of stress if they had just been honest with us. So I'll never support not mentioning breeds to potential adopters. As a renter it is extremely important to me to get a dog who is not an "aggressive breed" -- unfair, I know, but that's life. Someday I'll be a homeowner and it won't matter.

Oh man, so sorry to hear that story. So sad. That must have been so hard.

Like Fairfax did I think it's a great idea as long as you take into consideration that certain places have BSL & having to work with labels accordingly to those rules. But beside that one little hiccup I love the idea - it really does seem to get people to focus more on the dog itself rather than the label. Let's face it - all of us probably have some sort of breed bias; whether it's our grandma's yappy yorkie or that hyper border collie and little subconscious things like that can deter people form actually seeing the dogs personality. After all a lot of the time they're just guessing on a mixed dogs breeds anyway.

Good question. I for one do like to know what I'm getting. And being a Rotty lover, I'm somewhat breed-focused.

Trying new approaches at shelters is never a bad idea. Try it and see how it goes. Denver Shelter is not charging for cats over a year old in June. Lots of shelters are trying inovative things, good for them. If it doesn't work it isn't etched in stone!

Yes, good reminder! It might be worth a try. It isn't etched in stone!

Interesting solution. I remember pet-sitting a purebred boxer for my roommate's coworker a few years ago. When my roommate was taking the dog out to pee, the property manager came running up to her yelling "No pitbull! Get rid! Get rid!" in broken English at her. She told him the dog was a boxer, not a pitbull, and she wasn't staying anyways. The manager replied "No boxer!" and handed her a list of banned breeds in our community. Boxers were not even listed. We ignored him and the dog left a couple days later, so it wasn't a big deal. I think in cases like this it may be helpful for the owner to have paperwork from the shelter that does not say "pitbull mix" if the dog looks to be a bully breed. Because, really, who the heck knows? They can register the dog with the city as a "lab mix" or whatever they think the dog is besides whatever breed their landlord doesn't like. All in all, I'm not sure how I feel about it. It seems like it could be a good thing if they do it right, but like in your example, poor customer service will kill anything.

Ugh ... that situation with the property manager sounds so frustrating. Unfortunately the complex I live in says no pitbulls on its web site. There are lots of boxers that live here and plenty of mixes that I would consider "pitbulls" but thankfully it doesn't seem to be enforced. Wish they'd just get rid of the rule.