A lot of people have asked how it’s going with puppy Remy.

We’ve had him 4 days. He seems confident, easygoing, curious and (too) smart.

I thought I’d write an update on life with our puppy in case it’s helpful for other “puppy parents.”

Remy is much smaller and even more adorable than he looks in the pictures. He’s probably 10 pounds or so, about the size of my small cat Scout.

Here are a few updates on life with our 9-week-old Weim pup.

Life with a 9-week-old Weimaraner 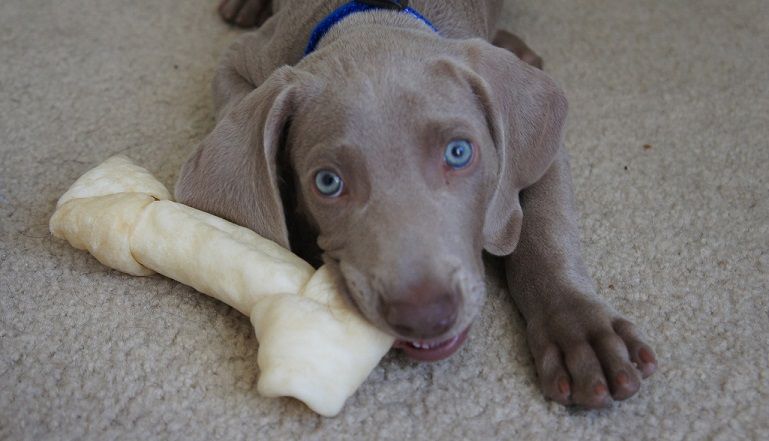 I can’t believe the potty training is going so well. Remy goes potty every time I take him out. He had two little accidents the first evening and one tonight (oops). I take him out every hour or so unless he’s crated. He will hold it in his kennel at night.

Puppy potty training is not complicated. Just take them out often and reward. Supervise inside and use a crate.

Remy wants to play with my older dog Ace but Ace wants nothing to do with Remy as I expected. This is fine. We didn’t get a puppy for Ace; we got him for us.

Sometimes people have unreasonable expectations for their dogs to be best friends. I don’t expect Ace and Remy to play or cuddle, but I do expect them to get along, which they’re doing. 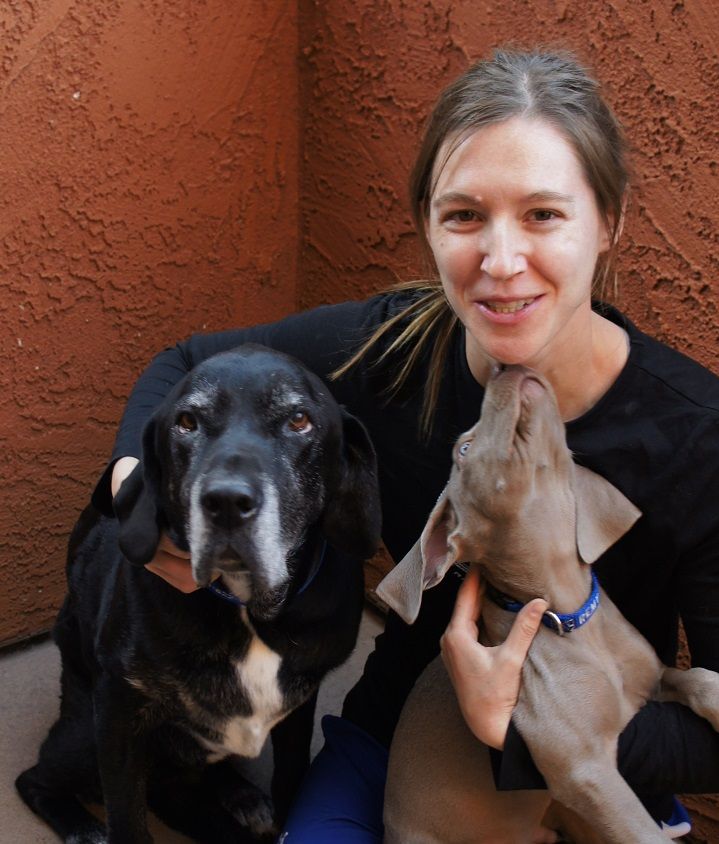 Ace growls if Remy gets in his “personal bubble” and I don’t scold Ace for setting limits.

It’s my job to distract Remy and Ace seems to see that I’m doing that. It takes some pressure off both of them. Remy already knows to leave Ace alone.

Remy can already walk a mile and a half around the neighborhood. I’ll continue doing that at least once a day and slowly increasing distance. Some people say you shouldn’t walk such a young puppy. They could catch a disease or damage their joints. I’m wondering, have they ever lived with a Weimaraner?!

There is some truth to those warnings, but I’m also a believer in using exercise, socialization and training to make a great dog. I’m not wasting any time. We’re avoiding running and visiting dog parks of course, but that doesn’t mean we can’t walk.

I wish I could take my two dogs for walks together. Walking together and sniffing things together is the best way for dogs to bond, but it’s just too hard for Ace. His walks are really just “strolls” and Remy can already go a mile and a half fairly quickly.

Once Remy has had all his shots, Josh and I will take them both to the trails, and I will stroll with Ace while those two speed walk. I will also be able to drive them to some quiet parks and Ace and I will teach Remy about lying peacefully in the grass. 🙂

Remy would like to be friends with the cats. The cats wanted nothing to do with Remy the first few days, but now Scout is starting to interact with him a little. My cats have seen lots of foster dogs come and go. (I hate to break it to them that this one is permanent.)

Remy is gated in the living room area or on a leash. The cats can hop over the gate and be in the puppy area if they want to investigate. Sometimes they do, but mostly they’re not interested yet.

Remy sleeps in his crate in the living room at night. He cried on and off the entire first night. It was very hard for me not to scold him but I succeeded in ignoring him. In the morning, I took him out when he was quiet and he went potty outside. He didn’t cry much the second night. Third night … lots of crying again.

He whines a lot in general too. Whenever he wants something or is excited or frustrated. So working on not acknowledging that. Sigh …

Update after 1 week: The kennel training is much better now. No more night crying!

So that’s about it!

Lots of potty breaks and providing lots of chew toys. That’s the story of my life right now. Life with a puppy is fun if you can ignore a LOT of whining day and night. We’re adapting a bit and mostly expecting Remy to adapt to us. OK … or maybe it’s the other way around!

I hope he’ll be a great dog. He’s scary smart. We have our work cut out for us.

What puppy questions do you have?

My readers are good at sharing tips and helping people who have questions. So don’t hesitate to leave yours below. Thank you, everyone!!

P.S. I know I’ll get some warnings about rawhides because of the picture I posted. No need to warn me.

Thanks for sharing, so the loving story continues. I seem to having read a similar fun reading on the New Yorker, but my memory could be messing up probably due to my love of Rémy Martin.

Good for you, Lindsay. We wound up with a Weimeraner for 5-6 months when any-day-now expectant parents were blessed with Lady, a 10-week-old pup. Lady was - is - oh so smart yet eager to please, and having two aging Boxers and a couple cats for company taught her boundaries and manners. Cats are great for that. As for chewy things, we swapped out for fresh ones frequently, whether rawhide or tennis balls, or toys. Congrats. Look forward to updates.

I'm glad it's going so well! It's good to know I'm not the only one with a total whiner. My parent's older dog also sets limits for our puppy. I'm always impressed at how good that pup is at reading body language; he can tell the difference between a playful growl and a "you're pissing me off" growl when I can't. My own adult dog and Link get along shockingly well. TOO well. Hiccup normally hates puppies but I keep catching them together, laying with their paws crossed and heads together as though they were plotting my demise wile I was in the bathroom.

Haha! I'm so glad your two get along!

Remy is so incredibly cute! The blue eyes are mesmerizing. We just celebrated our black lab mix puppy Jango's first birthday on 3/26. After two other puppies and an introduction of a beagle when she was 2.5 yrs old, Jango has been pretty easy. I don't know if it is experience or if he is just that laid back. We had a different experience than you since we both work outside of the house on weekdays. We initially started out with a large wire crate with a wire pen attached to it and a puppy pad in the pen while we were gone, but after only a couple of weeks, Jango was already climbing to escape. We didn't want to leave him in the crate all day since we are gone 9+ hours some days (with 8-hr workdays, lunch, and commute), so we tried him out with free roam since we have a dog door. We have tall gates (with no horizontal bars for climbing) from the living room to both hallways, so there is limited house access. He has chewed up only the corner of a crate cover (he likes to chew blankets for some reason) and nibbled the corner of our coffee table while we've been at work since we got him last June. I really think that our 13-yr old black lab mix Kepler, and our 5-yr old beagle Leia have helped out a lot with parenting and entertainment while we've been at work.

Sounds like he was a really good puppy! (And lots of consistency from you helped I'm sure!)

When do you think you'll start running with Remy? When I got Linus 10+ years ago I wanted him to be my running partner, but numerous people warned me about the dangers of running him to early and the consensus back then was not to have him running distances until he was 2 years old. I'm glad everything is going well. Hopefully he lets you start sleeping a little more in the coming days.

I'll take him on short runs when he's 8 months guaranteed, maybe sooner. Like 1-2 miles slowly. Its not like he'll really be running, more of a fast walk for him while I run. Slow humans