My Dogs Will Never Be Best Friends, And That’s OK

Home » My Dogs Will Never Be Best Friends, And That’s OK

Are your dogs best friends?

My dogs are getting along much better lately, but they are not “friends.” I doubt they ever will be.

I have a 10-year-old Lab mix named Ace and an 11-month-old Weimaraner named Remy.

For the first few months, my older dog was aggressive to our puppy, even striking him in the head and drawing blood.

Of course, it’s normal for a senior dog to correct a rude, rambunctious puppy, and it’s up to the OWNER to manage interactions and keep everyone safe.

At first, I thought my senior dog was out of line with his aggression. Our puppy was so tiny! But now that Remy is bigger and stronger and able to throw some weight around I’m realizing Ace knew what he was doing all along. 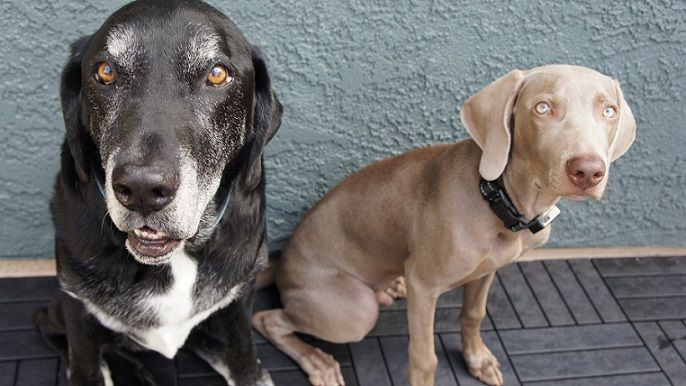 Remy often ignores my corrections. He does not ignore Ace.

Ace is not an aggressive dog. He’s very well balanced and easy going. He’s been recruited a dozen times to help socialize anxious or aggressive dogs that would otherwise have no dog friends. So I probably should’ve given him more credit.

Today, Remy is respectful of Ace’s growling and posturing. I see that it was good for Ace to make an impression while Remy was so small. I still supervise them, but I no longer worry about Ace being too aggressive. Remy knows Ace doesn’t want to play and to leave him alone, respect his space.

But are my dogs friends?

Ha! Not a chance.

A common comment I get from readers goes like, “Oh, they’ll be friends in no time.” Or, “My dogs are inseparable. Yours will be too!”

I am almost positive this will never happen with my dogs. 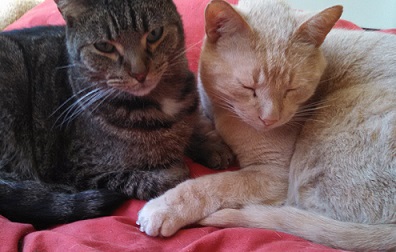 (But I do appreciate the positive opinions!)

My two cats are best friends. I find Beamer and Scout curled up in the same bed or the same basket, grooming each other or playing like kittens even though they’re both getting old. It’s cute to have animals that love each other like those two seem to.

I doubt Ace will ever allow Remy to curl up beside him. And Remy knows better than to try!

We’ve fostered about 15 dogs over the years, and Ace was never “best buds” with any of them, at least not until after they were adopted and we saw them in other environments, like walks.

Some dogs don’t need other dogs as playmates.

Some dogs do not particularly care to interact or engage with other dogs, at least not in an enthusiastic way.

For some dogs, simply lying calmly in the same room is their version of “affection.”

Ace has a few dog friends he gets excited to spend time with (some of you know who I’m talking about!), but those dogs are rare and those dogs are extra special. They are the dogs Ace associates with hikes, walks and probably their owners! And these are dogs that respect Ace’s space, asking for nothing more than to go for a walk.

There’s little chance that Remy will ever win Ace over in that way. At best, I can hopefully get them to run and play together outside. (This hasn’t happened yet.) 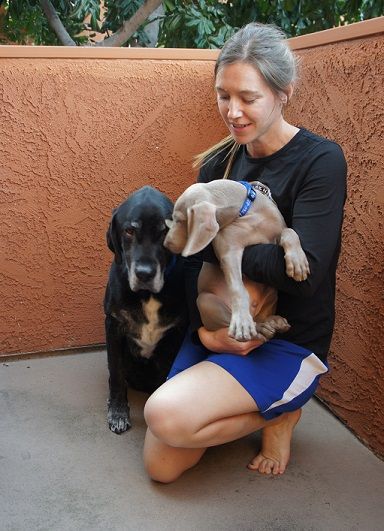 But I did not get a puppy to be Ace’s playmate. Ace has never needed a playmate.

I got a puppy to be my running, hiking and agility dog. Remy is already doing a great job. (If you’re thinking of getting a second dog, make sure it’s really for YOU and not your other dog.)

And … if you have two dogs, they may or may not be best friends. Don’t push it or count on it.

People will probably tell you your dogs will be “best friends” in no time, but that’s not always the case.

Hopefully, they’ll at least get along. That’s all I ask of my two, and even that’s a stretch for some dogs.

Dogs are individuals, and the main thing is we each understand our own dogs and keep our expectations realistic. 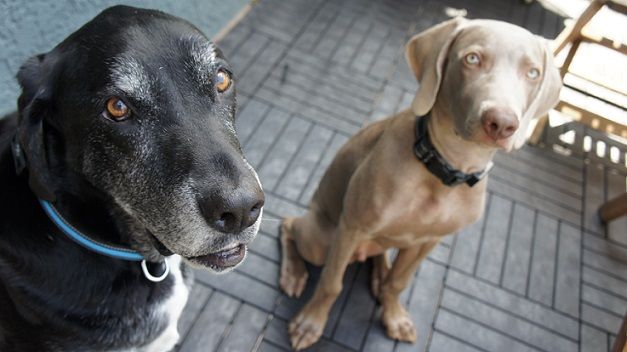 Are your dogs best friends? Did that happen right away or over time?

I love this post and the comments are all great. I have 4 dogs they are 13 years to 3 years. One GSD, one Chihuahua, and two Rotties. I have only introduced puppies into the group as we grew, how does one introduced an adult dog into the mix? I have two females and two males. We are looking to introduce a seven year old female. She is not dog agressive, she will be in her create and kennel or on leash until everyone ignores each other. I don't know yet if she has ever played with another dog. My crew are all muzzle trained. And I plan on making sure the new girl is also. Any suggestions?

When we foster, I keep everyone separated by a baby gate for a short period and then do supervised walks together with another person walking one dog. When the baby gate comes down, I keep the foster dog on a leash, trying not to add any tension but just to keep everyone safe. The fact that yours are all muzzle trained is great! If they normally don't have issues with new dogs and the new dog is generally good with other dogs everything will probably go ok. I would probably have the new girl around one or two dogs max at once so she's not overwhelmed. And lots of walks with her and the others. Good luck! That is exciting!

I have 2 jack Russell's both now aged 3.5 Years.... jes I got at 8 weeks awww lol and she wrapped me right around her litttle finger. 6 months later I bought bella, a gorgeous little girl a rescue dog from a shelter. Well here we are 2 years later , 3 fights and jes giving the occasional warning growl to bella. Both sleep on my bed, bella(little rescue girl) follows me everywhere and is always at my side , jes on the other hand is not overly affectionate to me but likes to "flex her muscles" occasionally by lying on my lap and giving bella the eye! Lol I woot bella for company for jes but they are roomies not buddies though bella would love nothing more than cuddling up with jes but jess looks down her nose at this insolent pup lol

My previous dog Carter was very much like Ace in that respect - he was awesomely behaved but didn't really crave attention form other dogs & didn't like to cuddle much. While it was quite different from attitude of the dogs I'd grown up with I appreciated his calmness in public & his ability to adapt. You're absolutely right - dogs are individuals, and my Carter taught me that and made me stop comparing dogs to each other quite as much.

Go Ace!!! We have a new puppy in our building and Missy will run back in the house!!!! At 8lbs she doesn't want anything to do with him. And she didn't even want to try when he first got here. D.O.G. looks at him, they sniff and then he's like, lets go, I don't like his energy. However Missy and D.O.G. I would say tolerate each other. Missy will do her crazy happy play dance and D.O.G. tries to play with her but she just stops and says thanks your too big. I think I need to watch who sits on my feet the most. That was the most interesting idea. D.O.G. is the one who I find sits on my feet the most however Missy sits in my lap. So it does seem like a jealousy thing.

Thank you Lindsey for a great post & everyone for their responses. I can feel a little less abnormal w/our dysfunctional canine family! We have 7, from 13 weeks to nearly 16 yrs, 2Rat Terriers, 5 Chi's. First, there are 2 subgroups.... His & hers. My husband's 3 stay upstairs mainly, coexist but not friends. My 4 stay mainly downstairs & can all be together if supervised & there are not toys or food. If not watched, the 2 girls who actually really like each other & will share a bed stay in one 1/2 of the room, & the other 2 are gates separately. It takes a lot of time & diligence to maintain peace but I brought them to our house so I will follow thru on the commitment. Besides, I personally don't like everyone I meet, let alone if I had to let them live w/us!

Haha! I'm sure you run into some challenges but sounds like you are making it work just fine!