I can’t tell you how many times I’ve been out running with multiple dogs and they wait until we’re 2 miles from the nearest trash can to do their “business.”

Ugh! Dogs! Why couldn’t you “go” when we stopped by that Dumpster for five minutes?

So then you’ll see me running with two dogs and sometimes up to THREE used bags!

Add winter weather to the mix and it’s even worse. Icy roads. Mittens. A facemask. Trash bins buried in the snow. At least I don’t have to deal with that anymore!

I’ve definitely cursed the City of Fargo under my breath while running.

Is it so freaking hard to put up more trash bins?

So what in the world is the Poo Vault? 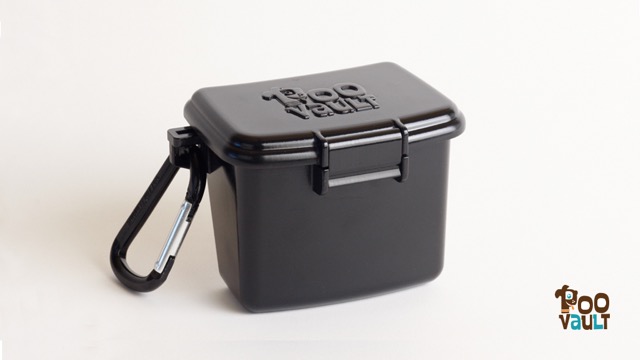 The Poo Vault is a brand new product that allows you to carry your dog’s used poop bags hands free and without the odor.

You simply drop the used poop bag into the “vault” (which is about 5” wide 3.5” tall) and clasp the seal. The odor is “trapped” in the vault, according to the product’s creator.

I was asked by the creator of the Poo Vault if I would share info about the Kickstarter campaign with my readers. I have not actually used the Poo Vault.

My thoughts on the Poo Vault:

This product definitely solves a real problem for suburban and urban dog owners, responsible ones anyway!

Since people are already carrying around poop bag dispensers and treat pouches, some of those same dog owners might carry a Poo Vault too.

My question would be, does it REALLY contain the odor? The creator of the Poo Vault says it does. 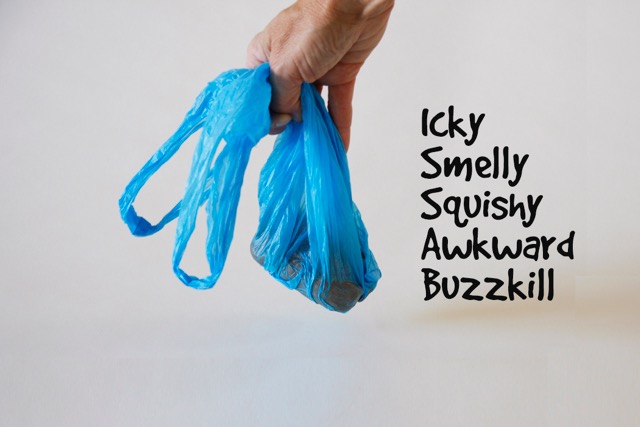 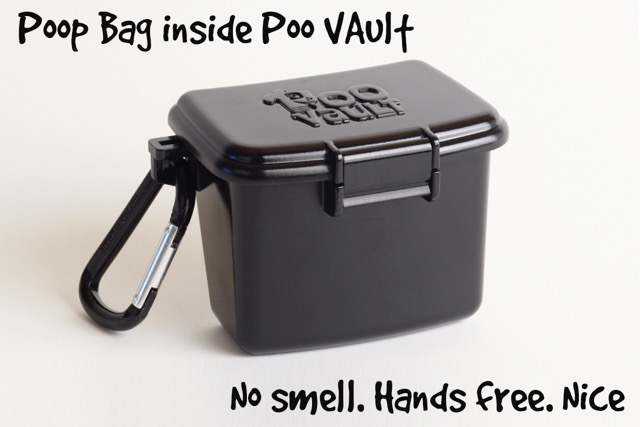 What is the cost of a Poo Vault?

The Poo Vault is not available yet. It is seeking $14,500 on Kickstarter to cover the manufacturing costs.

You can pre-order a vault when you back the Kickstarter campaign by $12 or more. Anyone who backs the campaign with $12+ will receive a Poo Vault in early 2017 (free shipping in the U.S.).

What’s unique about the Poo Vault?

This is the first time I’ve heard about a product designed for carrying used poop bags. Plus, it apparently has the ability to trap in the odor.

I’m embarrassed to admit I have “double bagged” my dog’s poop and then carried it in my backpack. This product would be a much more sanitary and less embarrassing solution, especially if it truly hides the odor.

Pros of the Poo Vault:

Would I buy this product?

No, this is not a product I would buy or use. It’s just a personal preference. I like to be as lightweight as possible on walks and can’t stand having extra items bouncing around such as a Flexi leash handle or a running belt. (I’m picky!)

I could possibly see myself using this for when I’m carrying a backpack in more rural areas. When there are no trash cans available, I could use the Poo Vault for my dog’s used bag and then put the Poo Vault in my backpack until we come across a trash area.

Would I recommend the product to others?

Yes, I would recommend this product for people who can’t stand carrying a smelly poop bag and don’t mind having extra items like treat pouches, poop-bag dispensers, etc.

We all have different habits when walking our dogs, and I think this product would solve a lot of problems for the right dog owners. Professional dog walkers might want to consider using it. 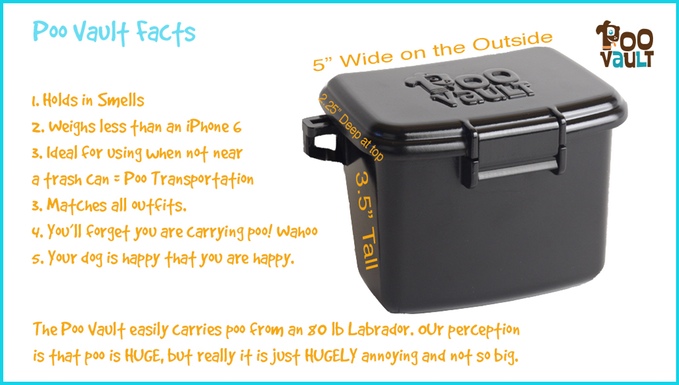 What do the rest of you think of the Poo Vault?

The creator of the product is in the stage where she needs to learn whether or not people truly want a Poo Vault. I imagine your feedback would be helpful to her at this stage.

In the comments, let me know what you think of the Poo Vault idea and if you would use something like this or know someone who would be interested (think, people who live in cities).

What do you think of the Poo Vault?

Previous
My Dogs Will Never Be Best Friends, And That’s OK
Next
Hiking With Ace
Click here to cancel reply.

Hi everyone. This is Jess from Poo Vault, Thanks for sharing your honest thoughts. I completely agree that really large loads would be difficult as would multiple dogs. Neither of those would be successful. However, KL, the Poo Vault is definitely a way to carry poo to the vet. It is also great for the time between bins. In my experience, I don't use a Poo Vault on every single walk, but I like not having to smell dog poo when I do need to walk by a few houses, or a few blocks or miles to a trash. It is a nice option. Nice talking with all of you. Have a nice weekend.

My dog has her annual well dog/boosters visit today. I would consider a poo vault to transport her sample to the vet's office. I'm lucky to have options for public waste bins in my neighborhood, but this would be a nice alternative to double bagging and riding in the car with poo. (I've seen people tuck a bag with the sample into their rear windshield wiper for transport, but then what if the windshield wiper starts up? You lose and/or smear your poo!)

I love the idea, but I know I wouldn't carry it no matter how much I complain about carrying bags of poop. I walk multiple dogs and juggling their leashes, picking up poop, and watching for reactivity triggers is about all I can manage. It seems silly now that I'm typing this confession, but I can totally see myself screwing this one up. LOL

That's cool...until you have a giant one left behind that's horse-sized from your 120lb bloodhound!

You are correct that vaults have been used for valuables, food and anything else someone wants to store. Often they have arched roofs and are located in basements, too. My intention was to make clear that bags are safely stored and will not leak.

When I surveyed 300 people in Portland, Oregon, Poo Vault was their first choice and Dog Poo Loo was second. Naming something is sort of like politics, hard to make everyone happy.

I appreciate this article Lindsay and your honesty about not using one. I made the Poo Vault because I think carrying a full bag is as inconvenient as the smell, which is why there is a belt clip on the back, so you can be hands free. I clip it to whatever I am wearing near my lower back, so my hands are free and the Poo Vault is out of site, because I want to enjoy walking my dog, not a bag of poo.

The Poo Vault is available on Kickstarter for a few more days: http://kck.st/29UuTPu and poovault.com.

The "will not leak" is very important!