We’ve had our weimaraner pup for more than a year now. Remy is about 15 months old. This is an update on his training and behavior progress for anyone following along and for myself to re-visit later.

In summary, Remy is still very immature, high-energy, frustrating and sweet. He definitely tests my patience. But he’s getting better!

Half the time I wonder why the heck I thought it was a good idea to get a weimaraner in an apartment (it was a bad idea). But then the next minute he’s blinking those pretty eyes and I’m kissing him on the forehead so thankful for my little buddy who’s always ready to work, learn or go on a running adventure.

I do have to say he’s shown some slight “maturity” in the last 2 months or so. He settles down easier in the evenings and in the daytime while I’m trying to work or relax. He doesn’t bother our senior dog Ace as much, and we’ve moved our baby gate further down the hall to give him more overall freedom.

Here are some additional updates:

Remy is now a running dog!

It’s good to be cautious about running with a puppy or young dog but now that Remy is over a year old I don’t hold back on our miles.

The most we’ve gone is 6 miles in a session, but I know if I wanted to I could take him on even longer runs and he’s be just fine. I don’t worry about his joints at all anymore.

Saturday mornings we run 5 miles on the local trails, and this has become a very relaxing and peaceful part of my week that I really look forward to. It’s a good reminder of why I got a weimaraner in the first place.

As far as training, here are a few things we’re working on: 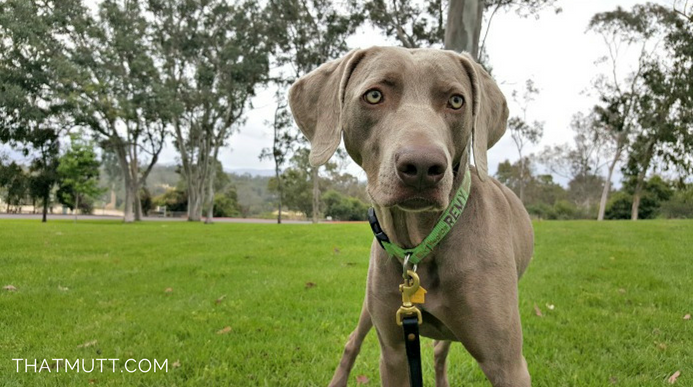 Remy doesn’t know any tricks other than twirl. He’s very smart and eager to learn and work, so this week I’m planning to start “back up” and hopefully eventually teach him to do handstands with his back legs on a wall or obstacle. I had trouble finding a good doggy handstand tutorial video, but here is one.

I’d also like to teach him to “perch” on obstacles which will start with teaching him to put his paws on a low object like a book. Eventually we’d work up to more challenging obstacles like fire hydrants!

Pulling on the leash.

Remy pulls really hard on the leash. In the grand scheme of things, this isn’t the end of the world but I’m embarrassed when we walk with other people or when other people need to walk him. I have a dog blog focused on TRAINING, and my dog acts like a maniac!

I’m thinking of doing a 30-day challenge for myself this summer where I do not allow him to pull on the leash at all for 30 days as a way to break the habit. This would be more complicated than just “standing like a tree” because we’d be there all day if I did that. I would have to be more creative, taking slow steps backward to get him to pay attention, etc.

Would any of you be interested in following along or participating if I wrote about this for 30 days? Please let me know in the comments.

The CGC test is a test by the AKC that looks for basic manners in dogs. There are 10 elements of the test, things like:

The dog has to pass all 10 elements to pass the test.

I do not believe Remy is quite ready to pass but we’ve been working towards it since January and have made significant progress.

Back in January I did not believe Remy would ever be capable of passing, and I was OK with that. Some dogs just can’t handle being touched by strangers, for example.

Remy’s main challenge for the CGC test is being able to sit still while a stranger greets him, pets him and touches his ears and paws! He’s not afraid of strangers, he’s just so happy and wiggly that he can hardly contain his little body! So we’re working on that.

We really need work on “place” or “go to your bed” so Remy has a place other than his kennel where he can just go to on command and relax.

The reason I haven’t worked on this is because he tends to get overly excited and tries to chew, pick up or shake the dog bed, towel or rug he’s supposed to be lying on. I’m pretty sure it’s his version of a tantrum! It’s frustrating for me. It makes me fee like I have a bad dog, so we just haven’t worked on it!

I also need to get serious about teaching him “That’s enough” as in “Stop shoving your damn toy in my lap, no one wants to play with you right now!” (See this post.)

And along with that, we need to get serious about “Off!” as in “Get your paws off me.”

We have a lot of work, still.

See my post: How to teach a dog OFF.

My dog still mouths and bites people’s hands like he’s puppy. A lot! I’m concerned I have done something wrong with him. Why does he still have this habit?

Thankfully he doesn’t bite hard, but he does bite when he’s excited, greeting people, frustrated or impatient. I know weims take a bit longer to mature than other breeds and I’ve heard them can be “mouthy.” But still.

Is this a serious problem? Or somewhat “normal”? Should I put bitter apple spray on my hands? Or consider an e-collar? So far I’ve just shrugged it off hoping he’ll eventually grow out of it.

See my post: How to stop a puppy’s biting and jumping.

Getting along with my senior dog Ace

Remy and Ace are getting along much better. Ace is more tolerant, snarling much less often. Perhaps because Remy is every so slightly less annoying. They will even snuggle up together in the afternoons when the sun is low and hits the living room rug.

See my post: My dog is aggressive to my puppy.

On a related note, Remy seems to get along beautifully with other dogs.

He’s respectful of dogs that posture or think highly of themselves. He’s gentle with dogs that seem shy. He’s fun to bring to the dog park, and I don’t worry about much other than him stealing other dogs’ toys.

Likewise, he seems to love every single person he meets. He doesn’t judge. He loves everyone. When he pulls on the leash, I remind myself of this. At least he’s friendly! Some of you have to deal with the problems with fearful or reactive dogs. Mine is just overly enthusiastic!

Remy barks at 6 a.m. or earlier every morning ready to start his day. I consider that a minor problem, but some days you just want to sleep in till, God forbid, 6:30!

I don’t know what to do about this other than use a shock collar, which I haven’t done. Instead, I just get up. Sigh …

See my post: Stop dog from whining in the mornings.

Remy was neutered at about 11 months, and I noticed a few small changes in his behavior:

Other than that, the most noticeable behavior difference is how other dogs respond to him. Unfortunately, when he was intact other dogs would often growl at him or posture around him. They still don’t appreciate his overly excited greetings but they’re generally much more tolerant of him now that he’s neutered.

See my post: What age is best to neuter a dog?

Well, that’s a lot for this post so I’ll leave it at that!

What are you working on with your dogs right now?

Do you have any suggestions for Remy’s puppy biting/mouthing behavior? I’m actually not too worried about it, but should I be?