For a variety of reasons, some dogs become “riled up” around certain triggers, especially when leashed.

These triggers could be other dogs, skateboarders, runners, etc.

Thankfully, there are ways to manage this behavior, and in many cases even help the dog overcome the issue.

I thought I’d share some tips from three other dog owners on how they manage their reactive dogs. I want this post to give some hope to others who may have recently adopted a reactive dog.

Please leave your questions or suggestions in the comments, as this is such a common problem in dogs.

Tips for managing a reactive dog 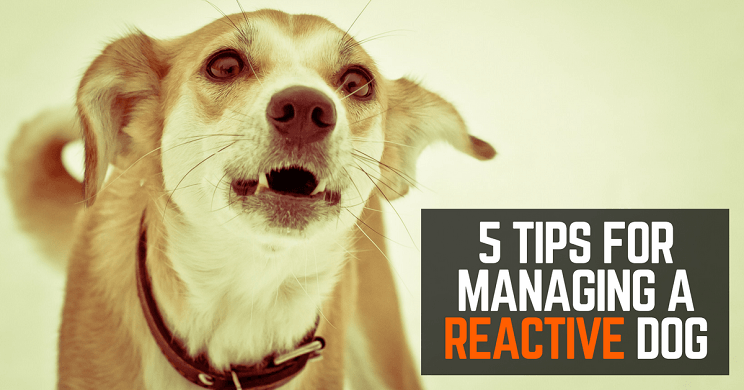 Know your dog’s triggers and threshold.

First, determine what causes your dog to react. These are your dog’s “triggers” and are most likely things like other dogs, children, bikes, etc.

Gina Caballero is the owner of a cairn terrier mix named Oz. 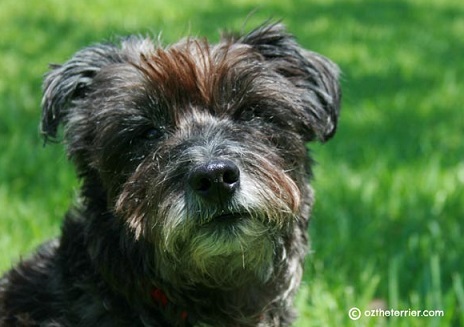 “Oz is reactive to only one thing, other dogs, and only when on leash,” she said.

To help manage her dog’s behavior, Caballero said she has to know Oz’s threshold, or the distance from the trigger where he will begin to react. This allows her to use different training techniques to distract him or desensitize him before he has a chance to react.

Caballero also said since Oz does not react to every dog, she has to pay close attention to his body language so she can try to figure out what his reaction will be.

You’re not the only one who feels judged.

Caballero said she often feels judged when Oz reacts to other dogs in the neighborhood, even though she knows he is actually a gentle, loving dog with obedience skills.

“He appears ferocious, and I get looks from people that say ‘Train your dog!’” she said. “It can be very embarrassing.”

Mahogany Gamble is the owner of a mixed-breed dog named Kayo and said her dog used to react to “anything that moved.”

At that time, Gamble also said she would feel judged and embarrassed by Kayo’s behavior. 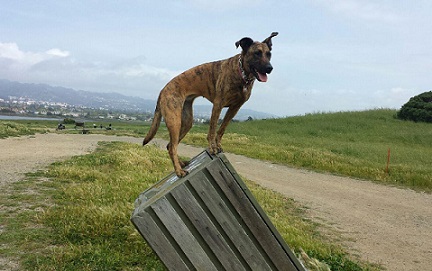 “I woke up extra early to walk her before the streets were filled,” she said. “I learned routes that weren’t crowded and even found a small dog park that was rarely used.”

Later, when she learned to use training tools such as a prong collar, she felt judged for that decision as well.

“In both cases, my ultimate realization was that I felt judged because I lacked confidence in myself,” she said. “As my confidence grew, I began to learn how to focus on my work with my dog rather than on the fearful or judgmental looks of others.”

It’s worth it to hire a dog trainer.

Lara Elizabeth is the owner of a border collie/Jack Russell mix named Ruby. She considers Ruby’s reactivity “quite extreme” and strongly recommends seeking the help of a professional trainer for anyone who has adopted a reactive dog. 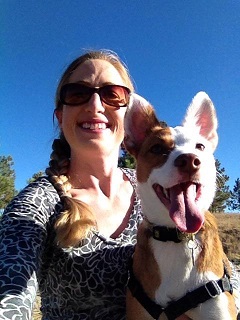 “I scheduled a few sessions with a local positive reinforcement trainer to make sure I was on the right track with Ruby,” she said.

She also suggested dog owners read all they can about reactivity.

“There are many great resources for this fairly common issue, and I believe the more people feel they aren’t alone, the more patience they have for their dogs,” she said.

Gamble said she worked with seven different trainers before finding the right ones to help Kayo.

“Several trainers insisted that my dog could only improve with medication,” she said. “Some even hinted at euthanizing her.”

She later worked with a trainer who said Kayo’s high energy and drive were simply her personality.

“Once I met the right trainers, they inspired me to look beyond my dog’s instinctual behavior and see the greatness she possessed,” Gamble said.

According to her, Kayo now spends her days as a confident dog with a “very wide world” constantly surrounded by what used to trigger her reactivity. 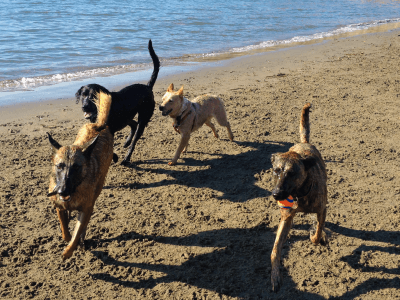 Gamble said she encourages all owners with reactive dogs to seek out a good trainer who can give them the tools to build their dogs’ confidence and good behavior around triggers.

There is no quick fix.

It’s important for people to know that a dog’s reactivity will not be cured overnight, according to Elizabeth.

“It very often takes lifelong management and training,” she said.

For example, she said she is lucky to live in a quiet townhome community where she doesn’t have to take Ruby into a crowded or busy situation.

“I am always alert when walking and will change direction when needed if someone is approaching,” she said.

Caballero said owning a reactive dog can often be two steps forward and one, two or three steps back!

“You have to be consistent and try to not get frustrated with your dog or yourself,” she said. “It is a learning process for both of you.”

Gamble said she would like to encourage other dog owners to believe in themselves and in their dogs.

“While there are numerous techniques that I learned and now use in my work with dogs, my attitude did play a significant role in my dog’s transformation,” she said.

“Without believing in what we both could do, we couldn’t have achieved anything great.”

Do any of you own a reactive dog? What are your tips for managing the behavior?

We've owned Dobermans since 1990. We lost our two seniors in 2017, but I used to walk them along with our 3 year old and our 8 month old. One day, we were walking on the blacktop trail past the off leash area when two pit bulls came streaking down over the hill to the fence, and were climbing up the fence and over each other, acting like the pack and this old woman were going to be their dinner. Callan, our 8 month old, got really scared, tried to run away and ran into our three year old, who body slammed him in response and put him on the ground. The idiot owner let those dogs intimidate my boys until they got to the very end of the fence ... I was positive they were coming around the fence (just a border fence, open on both ends) .. to cause us major problems ... before he called them off. You could see on his face that he was enjoying the whole scene. Since that day, walks with Callan have not been easy. He never relaxes on leash ... he's always watching ahead for other dogs he's sure are out to get him. I quit taking him to the park with the rest of the boys (we now have his older buddy from our original pack, and Callan, and an 11 month old). I've been taking him by himself, trying to stick to the fields along the trails, except where it's narrow and we have to take the trail. I've been asking him to sit and keeping him occupied with treats when I see other dogs coming. Sometimes this works; other times, he uses his nose to toss my hand and the treats out of the way to watch the dogs. I try to stay calm and relaxed, but I can't say that either of us really enjoy the walks these days. He's 128 lbs. of muscled up Euro blood Dobe .. he's such a soft hearted goober ... unless on leash with other dogs. One day at a time ... I keep hoping to get him through this at some point. Really have to watch for people with little dogs on those danged extenda leashes, who let their dogs start to run right up to him. I truly don't think he would hurt another dog, but I don't want to cause him setbacks in the little bit of progress we've made.

I have a very reactive, shy, fearful,aggressive golden retriever. Puppy mill dog rescue, etc, A good trainer is crucial! I needed help, and people couldn't believe a golden could be so aggressive. I taught "look" , and keep an eye on her body language. She competes in agility where there are other excited dogs and the owners realize that dogs need space. She's so much better now.

With my boy Link, I looked for potential triggers (like another dog), and before he reacted I asked, "who's a good boy?" He turned around knowing that he was going to get a treat. Sure enough, now when he hears a dog barking the first thing he does is turn around and look for a treat for being a good boy instead of pulling towards the sound and barking back, without me even having to say somthing.

I never post comments on websites, but felt compelled to after reading this. I adopted an adult rescue who has fear-aggression issues and very unpredictably leash reactive. I'm just relieved to know that I'm not the only one who feels embarrassed and judged by their dog's behavior. After beginning to feel extremely anxious myself about it I hired a trainer. She's made progress, but I think she will forever be a work-in-progress. She is otherwise the sweetest, most well-behaved dog I've had.

I'm sure you've made some great progress even if it's not obvious to you!

Our dog Mac has anxiety issues. He was rescued by my son in Miami, FL. He was 5mos old then. He is 2 yrs old now. He is a loving sweet dog but has issues with almost everything that moves & noise really triggered his anxiety. We sent him to obedience school & no one can control him. We ended not sending him back because even taking him to the class was a struggle for us. We bought too many leash, basically whatever we read from your blog we bought & nothing works until I cried at the Vet. The lady that was working there recommended a trainer / Lupo Canine services. He came & after his assessment we decided he will keep him for 2 wks. We will see if he can be rehabilitated. It sounds so bad & I dont want anything happened to him & us too because we cant control his anger/ anxiety. In two weeks he came home much improved. He listens & follow commands. But the trainer recommended he should need another 2-3 wks more to teach him to control his anxiety. I wont lie he is my challenge every day I take him out. It keep me in my toes but him following my command is big difference. Hopefully when we have some extra money we want him to stay with the trainer & this time his fear he will overcome. We take it one day at a time & we love him. I thank you for sharing your experiences with your dogs & others too. It makes me feel not alone having dog issues.