Our farm came with a cat. We know nothing about her history or her age. In fact, we know so little about her that we named her Ralph before we actually met her.

Ralph is an amazing cat who’s super calm and confident. She’s a barn cat and spends all her time outside.

We’ve gotten to know each other much better, and she’s now super affectionate—and demanding for kibble, treats and scratches. We’ve also learned that somewhere in her life Ralph may have had a bad experience with a dog.

Our rescue group did a home visit before we adopted Baxter, and the volunteer brought a dog with her. Ralph immediately ran for the barn, even though the dog was a Chihuahua and just about her size.

When Baxter came home, Ralph spent a lot of time hiding in the barn. Baxter is a very social dog, so he was incredibly excited to have a cat sister waiting for him at his new home. He would stand at the barn and cry. He would jam his nose into the cat door and sniff has hard as he could.

Eventually, he became so frustrated that every time he saw Ralph, he would chase her. 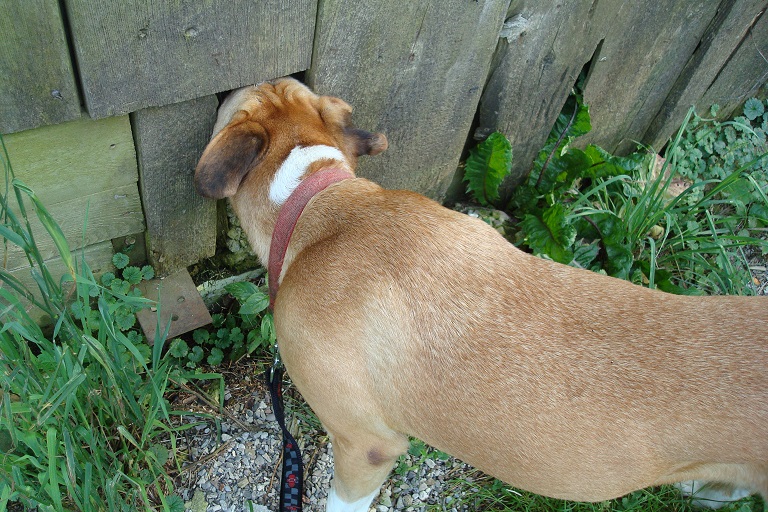 Introducing your dog to outdoor cats

We tried lessons of “cats are boring.” We tried distracting him with treats. We usually kept him tied up on a long line when he was outside. If he did happen to chase Ralph, we made sure there were consequences—he got tied up or put in the house.

This situation would have been very different if Ralph had not been a barn cat. If both animals had been in the house, I think they would have gotten used to each other much more quickly and we would have had to put in a lot more work to get them to live together. 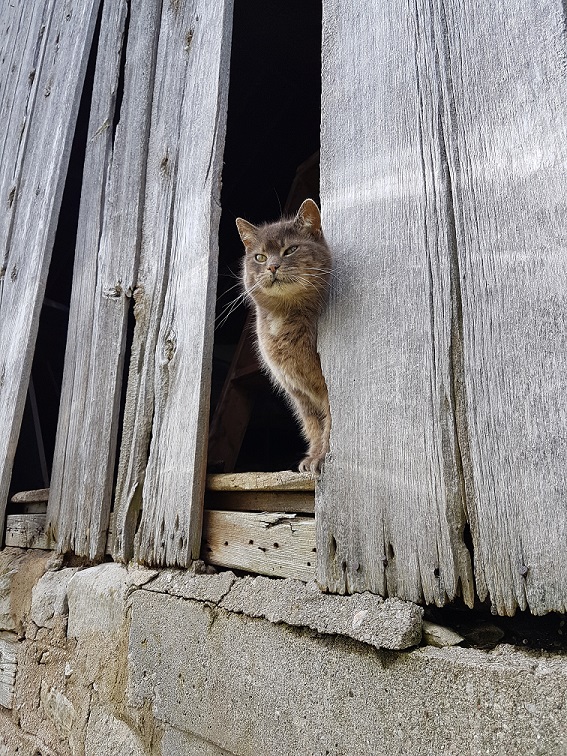 I carried Ralph over to where Baxter was tied up. They both pretty much lost their minds. Ralph eventually sunk her teeth into my hand, squirmed out of my arms and landed on the ground in front of Baxter. She hissed and swiped with her claws—she’s a tough barn cat after all—and Baxter stumbled backwards seemingly unable to comprehend that someone might not like him.

Ralph sprinted for the barn. I apologized to everyone, nursed my sore hand and decided I wasn’t going to force this relationship anymore.

Somewhere along the way, Baxter and Ralph came to an uneasy truce. They can now be outside together and get along for the most part. I’m not sure that anything we did helped to get them to this point. I feel like it just took time.

They will both sit out in the yard (and Baxter is no longer tied up). They will sniff each other. A couple of times Ralph has flopped over for belly scratches while Baxter has sniffed her. Once she must have been incredibly itchy because she rubbed against his nose to scratch her head. 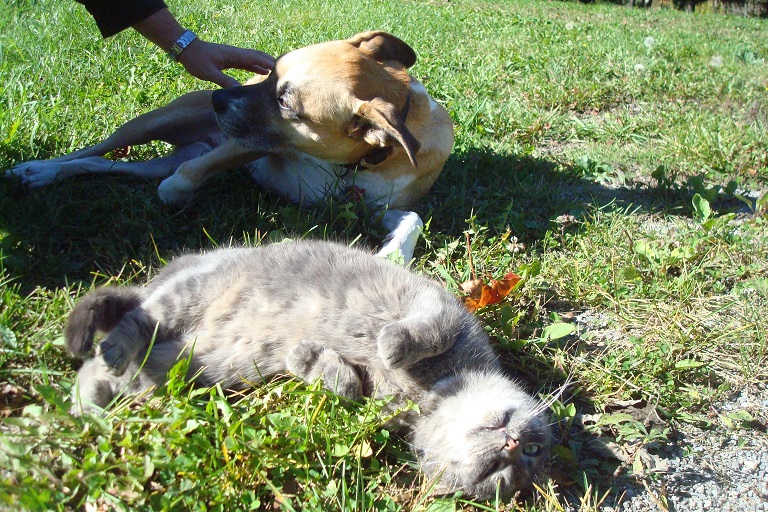 Ralph is still uneasy sometimes. Baxter is still excited sometimes. He likes to do zoomies, and often his zoomies take him past the barn.

If Ralph doesn’t feel like going inside, she will pancake herself to the ground and pretend she’s invisible. Or she just looks at him like he’s an idiot for expending energy running in circles—typical cat. On those days, B usually veers away before he gets too close to her.

A few weeks ago he tried to do zoomies with her and got between her and the barn. She didn’t understand his play bow and the result was hissing, dodging and a quick dash to the barn. No one was hurt and Baxter’s confused look and Ralph’s indignation made me laugh more than anything.

Now we’re at the stage where I prefer to let Bax and Ralph work things out between themselves. If Ralph doesn’t want to deal with him, she’ll usually sit out of reach under one of the cars or stay close to the barn. 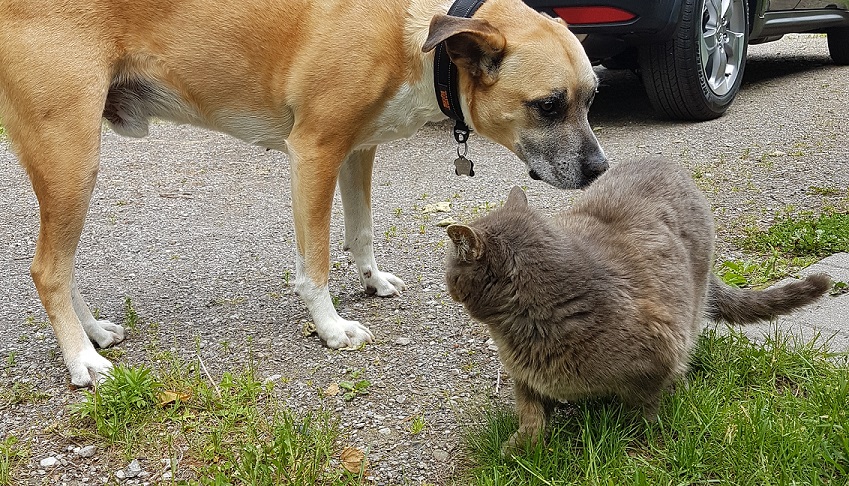 Watching Baxter, I can usually tell if he’s over-excited and in the mood to chase. A quick verbal correction will attract his attention and remind him to leave his sister alone.

While they will never be best buds, I’m pleased that they usually can coexist without drama.

What are your tips for living in a multi-animal households? Do any of your pets not get along?

Julia Thomson is a blogger at Home on 129 Acres where she writes about her adventures of country living and DIY renovating. She and her husband live on a 129-acre farm in Ontario, Canada.

How to introduce your dog to a cat

Are weimaraners good with cats?

i am not sure my dogs would get along with cats. i know at the vet they are curious when they see them. at home, when a stray cat comes on the property they want to chase them and bark at them. i think they would probably get along if i had cats in the house though.

Sometimes it's really hard to guess how dogs will react to various situations and animals (or people).

hi love your bog ,my dog bud has become very very frighten at any banging sounds.its becoming so bad that he will start shivering .Can you help me so i can help him. thanks fraser.

I'm sorry to hear about this. This sounds very stressful for both you and your dog. I would suggest checking out this post from Lindsay: https://www.thatmutt.com/2015/06/30/my-dog-has-extreme-fireworks-and-thunder-anxiety/. The comments also have some additional tips from people.

You don't say how long Baxter and Ralph have been living together?? We have a rescue cat (Cous-Cous) from Ibiza and a rescue German Shepherd. Our cat is incredibly nervous and can only cope with us (myself and husband) - and is very affectionate (but only with us). She'd been with us for 6 years when Blu (GSD) came to live with us a year ago. I have felt awful for her, as her life with us changed a year ago. However, she has never left (my over-riding fear) and although we don't see much of her during the day, she is always on our bed at night. Blu would have been normally, but he sleeps in another room - only because of Cous-Cous. Big breakthrough today - she came through the cat flap when Blu was only a few feet away - he didn't chase her (incredible!) and she didn't run away from him - even though she would have done a few months ago. So us interfering is wrong maybe - although Blu knows he mustn't chase - treats, praise etc etc! I have had cats and dogs in the past who have lived (and played) very happily together. Don't think this (playing) will happen with our two, but feel more hopeful now ....

We've had Baxter for nearly four years now, and we moved to the farm (and met Ralph) five year ago. I would say we saw the biggest breakthrough with them after about a year. And I really don't feel like we can take credit for their ability to tolerate each other. It's really just time. The one time we absolutely interfere is the chasing. That is a no-no.

I believe Baxter and Ralph have lived together for a few years now.

That's great yours have been doing better.

I have two indoor cats and two indoor dogs. One of our cats is nervous around our young weimaraner. We've had the weim for a year now and it's taken this long to finally see my more fearful cat gaining some confidence. We haven't done a whole lot to try to improve their relationship, just let them go at their own pace and the weim is crated when we're not home. We keep a baby gate up all the time so the cats can get away if they want and we do not allow any cat chasing. I believe our dogs do view our cats as part of the family vs. the cats they come across outside and want to chase.