Now, let’s also consider that many weims do live with cats and they get along fine.

So, are weimaraners good with cats?

It depends on the individual dog, of course. Not breed.

It depends on the cat, too. Is the cat used to dogs? Does he handle himself OK around them?

And as an owner, do you know when to step in and keep everyone safe, what to tolerate and how to safely introduce a dog and a cat?

Bottom line. No, weimaraners are not necessarily known to be “good” with cats (for the reasons above). But, if the dog is raised with cats or perhaps properly introduced later in life in a safe way and given clear rules, it can work out just fine. 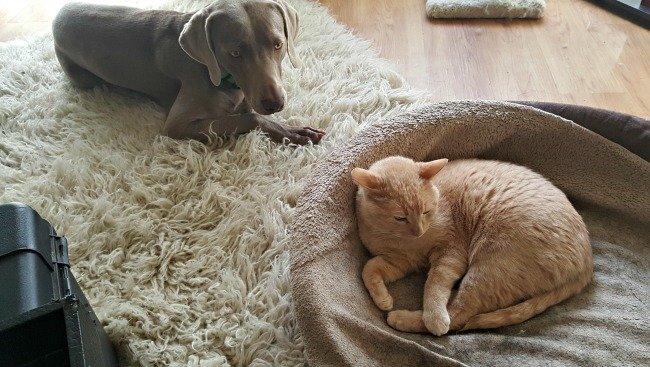 My weimaraner Remy is “good” with my cats.

By that, I mean he is not aggressive with them. We don’t allow him to chase the cats, although he’d love to. But he’s still too hyper and wiggly for their liking. He tries to nose them and paw at them (just like he does to us too). Basically, my weimaraner is rude to everyone – people, dogs and cats. But we don’t allow him to terrorize our cats.

Beamer, our calm & cool, confident tan tabby is very good with Remy. Beamer walks into a room with slow confidence, claiming the area with energy that so clearly says, “You will give me space and respect.” Beamer is 14. He’s been around  a while and let’s just say, He’s seen some shit.

Scout, our more sensitive gray tabby (not pictured) is nervous around Remy. I think he’s getting better but for the most part he stays on the other side of the hallway gate. 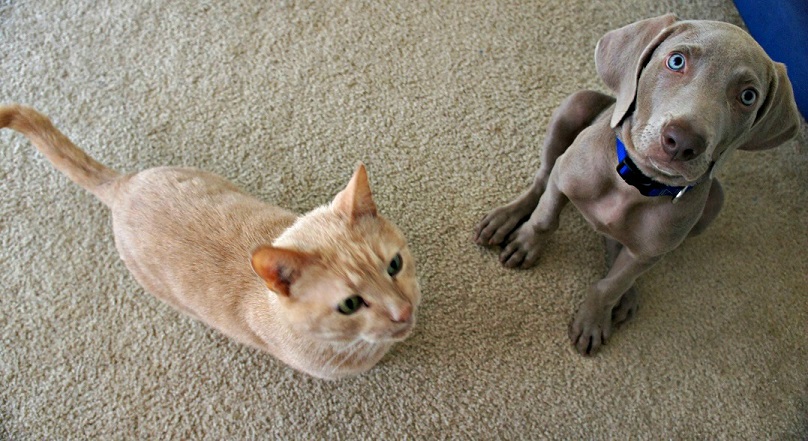 All that being said, I trust Remy with my cats. I can leave them in the same room and he might annoy them but nothing that concerns me. I wouldn’t leave them loose together home alone, but Remy is always kenneled when we’re not home anyway.

I’m also careful when there’s food out, but that’s common sense with all animals. I’m careful with food around my Lab mix Ace too.

Remy was raised around our cats from 8 weeks, and I think that’s what made the biggest difference for him. He sees cats outside and he gets excited and wants to chase them, but it’s not the same “drive” I see in him when he spots rabbits or birds.

I wanted to write this post because I saw someone from a Labrador rescue posting on Facebook about how her group had taken in a weimaraner for adoption and the dog couldn’t go to a home with cats. “Weimaraners are cat killers,” she said. “They can’t live with cats.” And then she and others went on about the “cat killer” weims.

Yes, some weims have killed cats. These are hunting dogs with a strong prey drive. You can say the same about a lot of breeds.

Dogs chase and sometimes kill small animals. Some weims shouldn’t live with cats, and that doesn’t make them bad dogs. There are a lot of dogs that should not live with cats.

Some weimaraners, just like any breed, can live safely with cats. It just depends on the individual dog, how it was raised and how it is introduced to cats.

Before we made the decision to purchase a weimaraner, one of my top questions for the breeder was, “Can weimaraners live with cats?” Her answer was very frank and I think accurate:

“Cats are generally not an issue when you get a very young pup (8 weeks) because they will be raised with them and generally the cat will lay down the law at that impressionable age, which helps.” 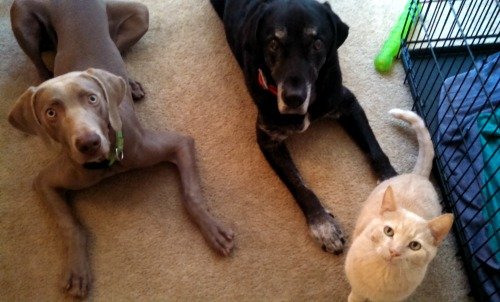 My weim Remy is good with our cats. He knows they live with us and that we’re all somehow this united group or “family.”

Two dogs, two cats and two people.That’s all he knows, really. His family.

Do we have any weimaraner owners reading? Or other people with breeds known for a high prey drive?

Do you have a cat? How do your pets get along generally?

23 thoughts on “Are Weimaraners Good With Cats?”