Home » How Would Your Dog Respond to Danger?

Thanks to Julia Thomson from Home on 129 Acres for her regular articles on That Mutt.

I consider Baxter to be a pretty selfish dog. He’s independent and chill and likes his alone time—and we love him for who he is. He’s just usually the centre of his own universe.

I’ve often wondered what he would do if Matt or I was in trouble. Would he be able to pull a Lassie? (My assumption was likely not).

Last week, Bax and I were out for a hike when we got caught in a bad storm. One lightning crack was so close I ended up crouched in a ball on the ground—and Baxter sprinted away in terror. However, he did not go very far.

When we each regrouped, he put himself about 20 feet in front of me and determinedly started down the path. Every few steps he’d look over his shoulder to make sure I was behind him and still coming. 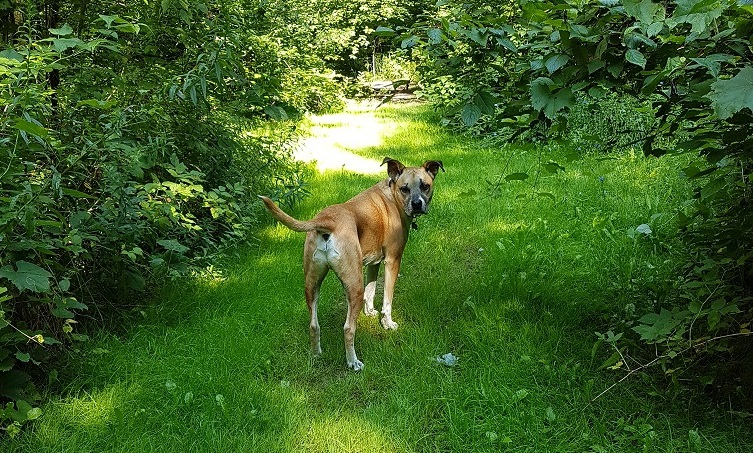 For a guy who usually can’t go five steps without stopping to sniff something or who ends up hundreds of feet behind me because he’s distracted by his nose, this was very unusual behaviour.

Now, you could argue that he just wanted out of there, but he felt safer with me. Or he knew I was his ride home and didn’t want to have to figure out how to hotwire the car. Or he was tired of being wet and wanted me to hurry up. Or perhaps, just maybe, he wanted us to get out of there safely together and he was watching out for me.

Or maybe I’m ascribing higher level thought to him than I should.

I do know we were both very happy to finally climb into the car and head for home.

Have you and your dog ever been through a crisis? How does your dog react to trouble?

If you have any examples, let us know in the comments. Thanks for the great discussion on Julia’s last post about dog licensing.

(The picture is a re-enactment during better weather!)

My 95 l German Shepard mix...who was usually a big goofy baby...turned into an aggressive barking threat when two twenty something men turned mid block and tried to come up on me from behind. I will never know their intentions because they quickly turned around again and went the other way. She was as loyal as they come. I lost her a month before her 12 th birthday and I knew I had to get another Shepard. I found a wonderful starving pup at a small rescue...she us already showing great promise. In the month without a dog, I never did have a good night sleep. A house is not a home without a dog.

I'm sure you have many lovely memories of your big goofy baby including this protectionist one. I'm glad that your new addition is working out.

Interesting timing on this post - my dog recently passed the GSDCA temperament test. Several of the elements of the test involve strangers (neutral, friendly, and "weird"). Your dog is supposed to be able to discern between the three and respond accordingly.

My dog happened to know the volunteer playing the part of "weird" stranger, so her reaction was pretty muted (no barking or growling, which are permitted and even encouraged), but my breeder was watching the test and said she still placed herself firmly between the "stranger" and me. I've seen her respond to perceived threats in the past, and she is squarely between me and anything that might be dangerous.

That's great! I think Ace also does this. Remy ... he hides behind me!

When my now old dog was in her first year of life, we moved across the country, and to a very (unbeknownst to us, initially) unsavory part of town. I pretty much relied on her to tell me who, in our apartment complex, was good (or not good) people. If she wanted to approach and meet someone, they were ok. If she barked and snarled and behaved really ugly as a person approached, we avoided them. She also reacted very badly to anyone who was smoking, or who had been drinking, and wouldn't let ANYONE approach me if it was dark outside. I learned pretty quickly to trust her judgement. That six months in our life was pretty terrifying, and it took me a while, once we moved back to a familiar locale, to realize I had some work to do in helping her to be a more polite canine. I had learned, from our experience out-of-state, to be initially frightened of EVERYONE. Once I was back on my home turf, I really had to force myself to smile, greet the people in our new apartment complex, pause, talk to folks, etc... She took my cue and started accepting those new people just fine. She's almost 14, now, and much more experienced. She still prefers to meet people on her own time, and in her own way, but she's much more easygoing.

On a side note, one day while I was cooking, the smoke alarm in our apartment went off (they say you should practice fire drills with your pets, so they know how to react appropriately, btw...). It was the first time she'd ever experienced that (and it was a rather odd-sounding alarm, too, not the usual shrill beeping- more like someone had suspended a motorcycle from the ceiling). I expected her to be scared, but she ran right to the hallway and stared up at the ceiling, trying to figure out what the H was that and what to do about it. I praised her for responding positively, instead of poorly, and she hasn't minded the occasional smoke alarm since.

That sounds like a very challenging living experience. It's interesting to me to think about what she picked up on to determine who she considered good guys vs. bad guys.

Good point on the smoke alarm. Thanks for sharing that tip.

I always thought my dog was so mellow with strangers that she would never be a very good watch dog. She was one of those dogs that lived in her own little world, never concerned with anything beyond what was right in front of her.

I was wrong. An unwelcome stranger reached through my open car window while my dog sat in the opposite seat. My formally mellowed out, nearly sleeping dog turned into Cujo in less than half a second. She lunged and attempted to bite the hand that was reaching for me while letting loose an incredibly scary growl that I never heard from her again.

The hand withdrew instantly and I rolled up the window. She scrambled over to my lap and continued to growl and snap at the man through the closed window until he left. After he was gone, she returned to her seat and looked at me like, "So, are we going home, or what?"

Over her life (she died this year at 18) met plenty of strangers, but I was never alarmed by any of them. She was alert, but calm, transitioning to happy when they turned into friendly encounters.

So yeah, they read you like a book and respond accordingly.

That's a good point that they react to our reactions and take their cues from us. I'm glad that your girl was there when you needed her. That sounds like a very scary situation.

My female shihtzu tries to be a bully. More than once she has tried to stare down dogs much larger than herself. And each time her brother got between her and the threat and shook.

It's neat how your dogs back each other up. And really interesting how size doesn't matter for confidence sometimes.