Have you ever run into the problem of your dog (or cat for that matter) turning down a specific cut of raw meat?

Rest assured that if you have, you’re not alone. I’ve heard and read of many raw fed pets who refuse to eat different kinds of meat.

Just recently, a YouTube follower commented on one of my unboxing videos that she ran into the problem of one of her dogs not being interested in liver:

My dog hates the taste of liver. Even if I mix it in with the tripe, she knows how to separate it and get it out. She absolutely will not eat raw liver.

The thing with liver is it contains minerals and vitamins essential to a balanced raw food diet that aren’t found in other cuts of meat. It’s a non-negotiable item that absolutely has to be fed.

Easier said than done with picky dogs who can’t seem to warm up to the consistency of liver. It is pretty slimy and mushy, so I kind of get where they might be coming from. 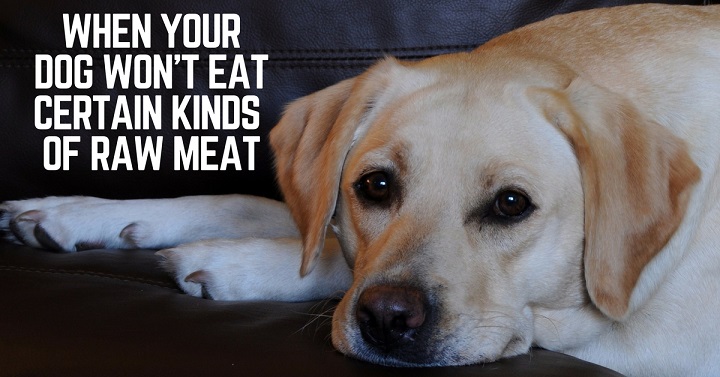 I personally have been fairly lucky with my dogs’ eating patterns and taste buds, but Buzz won’t touch pork uterus.

When your dog won’t eat certain cuts of raw meat

So what’s my approach to overcoming the lack of interest in a certain raw food item?

The easiest alternative is to not let the cut of meat thaw entirely. Offer it to your pup still slightly frozen. This will mask the smell of the meat to a certain extent. You can order pre-made, balanced raw diets from Raw Paws here.

If that doesn’t work, try offering it as a dehydrated treat.

One option is to dehydrate it yourself using a dehydrator or the lowest setting on your oven. Since this approach takes about 10-12 hours, you’ll definitely need enough time.

Also keep in mind that some cuts of meat such as liver have a distinctive smell to them, so lighting candles and/or opening windows during the dehydrating process is something you might want to try. 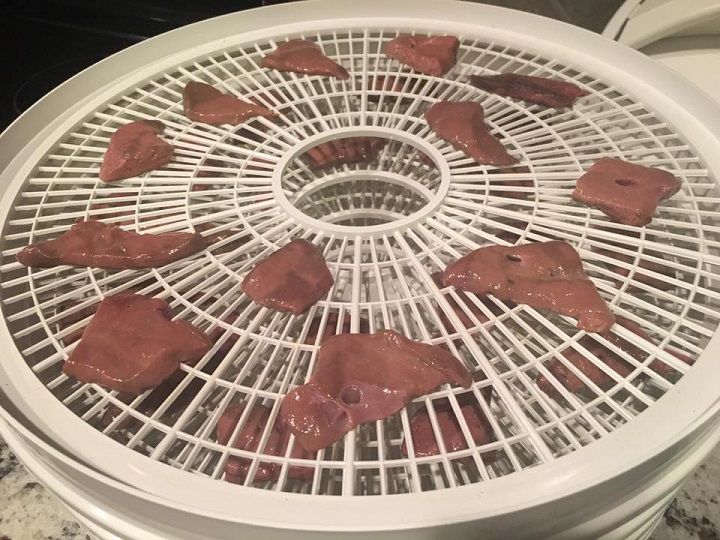 You can, of course, also skip the DIY idea and buy dehydrated or air dried cuts of meat instead.

I get the pups a monthly subscription box of air-dried treats from a small company in San Diego called Real Pet Food. They’re raw feeders themselves and they air dry muscle meat, organs and bones. One box of assorted cuts of air-dried meat costs $35, but they also offer other options starting at $19.

Yet another option is to try grinding whichever cut of meat your pup declines to eat whole and see if he’ll eat it that way.

Since secreting organs like liver are super soft, you can just throw them into a food processor. 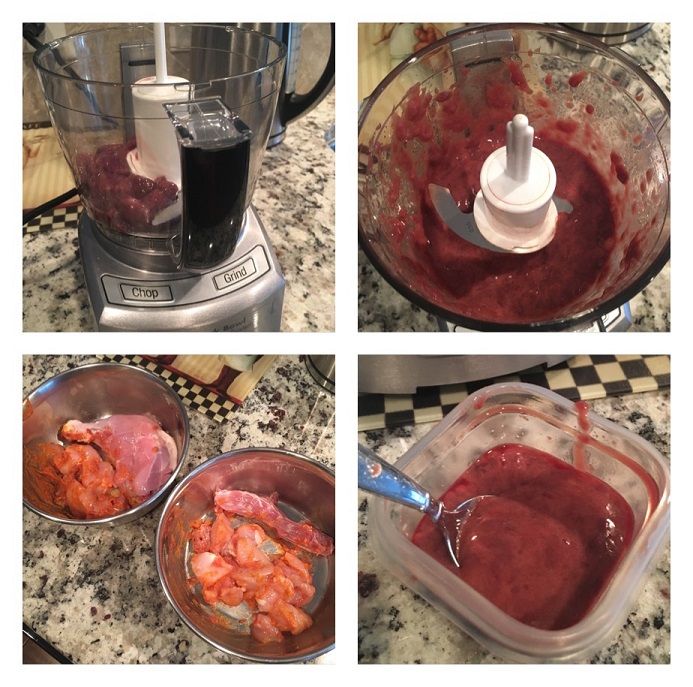 Other cuts of meat have a harder consistency and might require an actual meat grinder.

You should be able to find a powerful one on Amazon. I’ve seen pictures/videos of raw feeders on Instagram using this meat grinder, which retails for around $160. 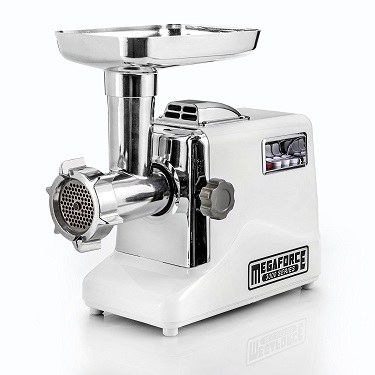 If your pup picks at the organs you give him and you’re not feeling like grinding them yourself, I can warmly recommend Raw Feeding Miami’s pre-ground organ blend, Monstermash.

1 pound costs $3.75 and consists of beef green tripe, liver, kidney, and two other organs the company alternates between.

Thanks. I started grinding all of their food and they eat it like champs now.

As mentioned earlier, I ran into an issue with Buzz when feeding my pups pork uterus for the first time.

He sniffed it a few times, picked it up with his mouth and then spat it back out. I tried offering it to him half frozen as opposed to raw, but still didn’t have any luck.

I wasn’t overly concerned with him not liking it since it’s not an essential part of the raw diet like liver is. So I didn’t even try to grind it. It’s just one of many, many cuts that are fed as muscle meat, and thankfully he’ll eat his gizzards, hearts, lungs, backstrap and others like a champ. 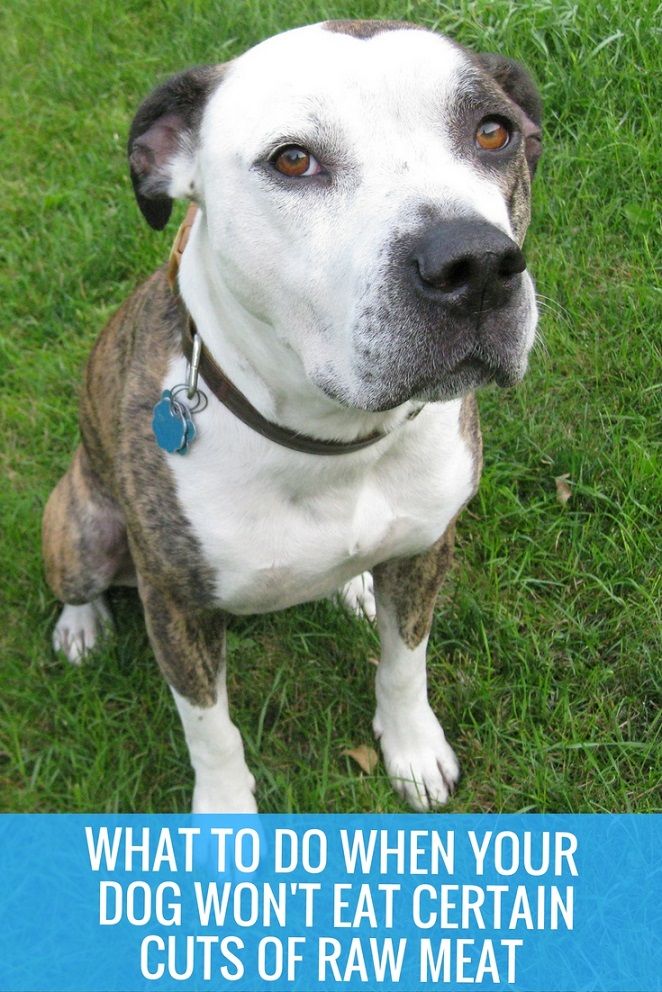 I just accepted the fact that pork uterus is to Buzz what brussels sprouts are to me (***YUCK, I can’t stand the taste of brussels sprouts***) and won’t put it into his bowl again.

Just in case you were wondering if his sister, Missy, will eat pork uterus – she LOVES it!

Funny how siblings can be so different! I have yet to find a type of food that my greedy little puppy girl won’t gladly eat.

Are there any cuts of meat that your dog(s) won’t touch?

Let us know in the comments! Also let us know if you have any questions or suggestions about feeding raw dog food or what to do if your dog won’t eat certain cuts of raw meat.

How do you feed raw dog food while traveling?

8 reactions to feeding your dog a raw diet

What to do when your dog is a picky eater