So your dog ate something bad—it happens to the best of us.

Lindsay asked me to write about this topic after her dog Remy swallowed a sock last month (he’s fine!).

The list of things my own dogs ate over time includes sticks, rocks, dead mice, plastic, a sock, chicken bones people threw away outside, and a [possibly pot] brownie.

You can teach your dog to drop or leave things, you can manage their environment, but there are limits to what you can control. You cannot control people throwing away things as they walk along, and you cannot pick up all the rocks, sticks, or mushrooms in your yard or around walking trails.

The odds are that some time through their life your dog will eat something they shouldn’t have.

What you should do depends on:

If you’re even aware that it happened! I didn’t know about the rocks, sticks and the sock until they [fortunately] came back out on their own.

First, do no harm.

The best case scenario would have been if your dog didn’t eat it in the first place. Since they already did, wouldn’t the next best thing be getting it back out? And can you do it yourself? Maybe.

Yes, I have induced vomiting in my Rottweiler, Cookie after she ate what might have been a pot brownie. Full disclosure—it was not my original plan and the marijuana bit didn’t even cross my mind.

It was shortly after we adopted Cookie. We were coming back from a walk when she found and quickly snatched something off the sidewalk. She didn’t know how to “drop it” yet and I doubt she could even if she did.

I didn’t see what she grabbed but my first instinct was to get it out of her mouth—probably not the best idea. If it was an object, such as a bone, it might have worked. But this was just a soft mass of something.

It was brown and it wasn’t poop—a brownie?

Chocolate toxicity depends on the type of chocolate and the amount ingested. I figured Cookie should be fine but to confirm I contacted one of my veterinary friends.

She agreed that Cookie was not at risk of chocolate poisoning. The next thing she asked, however, blew my mind, “Any chance it was a pot brownie?”

Ugh. Maybe? Which is what lead to unimpressed Cookie having to dump the whole lot back on the sidewalk. I did that after the consultation with the vet. I recommend you do the same—ask.

Trying to fix the situation the wrong way might be just as dangerous as doing nothing.

Can I make my dog throw up myself?

In most cases, I would not want to make this decision without consulting with a vet, Pet Poison Helpline, or ASPCA Animal Poison Control Center.

There is more to it than whether or not your dog ingested something harmful. You do not want to cause further damage or complications.

Criteria to consider before inducing vomiting in your dog include: 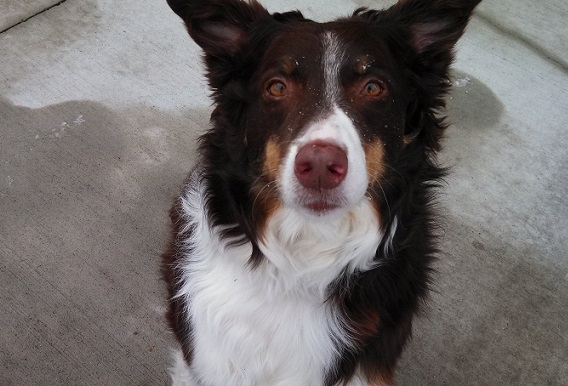 In other words, I might induce vomiting at home if:

I might take the plunge and just do it if my dog ate something like chocolate, grapes, raisins, or macadamia nuts. With anything else, I’d want to consult a vet or a poison helpline.

If getting to a veterinary clinic or veterinary ER fast enough is not possible—such as it wouldn’t for us—after talking to them I might need to induce vomiting with other poisonous things such as antifreeze, xylitol, certain medications, poisonous plants or mushrooms. But I wouldn’t want to be in that pickle without advice or support.

Never make your dog throw up if he ate the following:

Never induce vomiting on your own if it’s been more than 2 hours since ingestion or you don’t know.

How to make your dog throw up using hydrogen peroxide

If all the circumstances are right, or your veterinarian or pet poison helpline advised you to make your dog throw up, there is one right way of doing so.

Don’t get creative. There are some ineffective or dangerous ideas out there, including trying to make your dog vomit by sticking fingers down their throat, giving them mustard, salt or ipecac. Never try using any of these methods.

The only safe and effective product to induce vomiting in your dog is 3% hydrogen peroxide.

You should have it in your doggy first aid kit, ideally with a syringe. If you don’t, make sure you add it.

How much hydrogen peroxide should I give my dog?

The safe dose of 3% hydrogen peroxide to induce vomiting in your dog is:

Only use an unopened bottle that has not expired. (If the hydrogen peroxide is expired or doesn’t bubble, it’s not likely to work.

If the safe dose doesn’t make your dog throw up, you can try again 15 minutes later. Do not repeat the attempt more than twice. The maximum amount of peroxide you can give at any one time is 45 ml regardless of how much larger your dog might be.

Squirt the peroxide into the back of your dog’s mouth.

Never give over the safe amount or try for a third time. (Note: Lindsay gave Remy a third dose when she tried to get him to throw up a sock. He was OK, but this is not recommend.)

The dangers of too much hydrogen peroxide for a dog

Peroxide works to make a dog throw up because it’s an irritant to the GI tract. Too much can cause uncontrollable or bloody vomiting—make your dog’s situation way worse. An overdose can cause gastritis, GI ulceration, or even an air embolus.

Having a large syringe, without a needle, works best. We used a turkey baster, which works just as well except that getting the correct dosage is trickier. We measured the amount first, placed in a skinny glass and suck it into the baster.

After you got the peroxide in your dog’s belly, get them moving. Walking assists the process.

Whether you succeeded in getting your dog throw up or not, you want to talk to a veterinarian.

What if I don’t have a syringe?

As I described above, a turkey baster can do the job. If you don’t have that either, you can try mixing the peroxide with something palatable if your dog accepts that. I can’t see my dogs coming anywhere near that but it does work with some.

I know a clinic where they mix it with a bit of vanilla ice cream in spite of having a syringe—to make it more palatable. And Lindsay mixed it with a little bit of canned cat food to get Remy to drink it from a bowl.

What if my dog ate something that is not poisonous?

What your dog ate or swallowed might not be poisonous yet still cause problems. This would include anything such as sticks, rocks, socks, underwear, pieces of toys, you name it. What to do then?

Never try to make your dog throw it up after eating anything that could damage the esophagus on its way out.

Is the object is soft, dull, and non-abrasive? How large is it compared to your dog’s size? Your dog’s system might smart enough to eject them on its own. It has been so with my dogs. Cookie is even able to eat a whole partridge and then puke out the feathers and guts while keeping the rest down. I am not kidding. I thought that was quite impressive.

The rest might just work its way out at the other end.

Most of the time, I had no idea what surprises my dogs’ bellies were harboring until I found it in vomit or poop. My dog JD’s many gifts of vomitus full of horse poop mixed with sticks were what convinced me to get a pet health insurance for him though.

With large objects, there is a risk of intestinal obstruction.

Should you try to induce vomiting though? Unfortunately, esophageal obstruction is also a thing—and potentially a dangerous one.

Just because something made it through once, doesn’t mean you’re going to be as lucky twice. I would not be comfortable taking that risk.

Your vet might induce vomiting in a controlled environment or might feel that the safest way is to remove the object with a scope.

Call me a yellow belly.

Yes, I am a chicken when it comes to my dogs’ health and safety. I’d rather take one precaution too many than one too little. I find careful consideration to risk versus reward essential. Having a vet at your side or at least on the phone goes a long way in tipping the scales in your dog’s favor.

Can I induce vomiting in a cat?

There is nothing you can give to a cat at home to make them throw up that is safe. Hydrogen peroxide is poisonous to cats and ingestion could be lethal.

OK … now we’d love to hear from the rest of you!

What is the worst thing your dog has eaten?

Did you make him or her throw up? We hope your dog ended up OK.

Jana Rade is a writer for dog magazines and is the blogger behind the dog health website My Dog’s Symptoms. Her site features what she’s learned about dogs and their health issues. She is also the author of the award-winning book “Symptoms to Watch for in Your Dog: How to Tell if Your Dog Is Sick and What to Do Next.”