If your dog has just swallowed a sock, don’t panic! Chances are, he’ll be OK.

I recommend you try to get him to throw up. More on that below.

I’m going to share with you my recent experience with my dog swallowing a sock, and of course if you’re not sure what to do it’s always best to consult with a vet.

A few weeks ago, my 3-year-old weimaraner Remy swallowed a sock right in front of me.

He has some possessiveness issues and tends to clamp down on items as hard as he can so I can’t get them … And sometimes he swallows those items.

Usually this is not a huge deal, and we manage it. He swallows small wrappers, napkins and small pieces of trash all the time. Not a huge deal.

I saw he had the sock in his mouth, and I asked him to “drop it.” Looking back, I probably should’ve just ignored him and he would’ve set it down on his own. Or maybe I should’ve given him a hard bop to the nose.

Anyway … he looked at me and then proceeded to swallow the sock in one gulp. Whole.

My initial thoughts were, “God damnit, you stupid dog! What the hell is wrong with you?”

Smart dogs can do dumb things.

I imagined the huge vet bill I might be facing and what it might be like to keep a young weimaraner calm for several weeks to recover from surgery. I was mad at myself for leaving the sock on the ground in the first place and pissed at my dog for ignoring my “drop” command for the millionth time.

Can a dog pass a sock?

After a frantic google search, I saw some people saying that their large dogs were able to pass a sock.

In our case, it was a thin, athletic sock, the kind that stops at the ankle. Almost like a kid’s sock. And our dog is 62 pounds.

“Do I just do nothing and hope for the best?” I wondered. “Will he be able to pass it?”

It was a Sunday evening of course so our vet was closed.

I was NOT going to call the emergency vet. No way. It’s great we have that option, but I have learned the hard way not to go that route unless it’s a true emergency ($$$$$!!).

So instead, my plan was to try to make Remy throw up using hydrogen peroxide and if that didn’t work, just wait it out and hope for the best. (Thank you, Maren, for your helpful advice!)

My dog ate a sock, should I make him throw up?

This is of course a question for your dog’s vet, but with my own dog I decided to make him throw up.

if your dog ate a sock, there are risks to making your dog throw up the sock. If the sock is large or if your dog is small, the sock could get stuck in his throat and become a choking hazard. I wasn’t worried about this with my 62-pound dog and a small sock. And our vet was closed, so I just decided to try it. 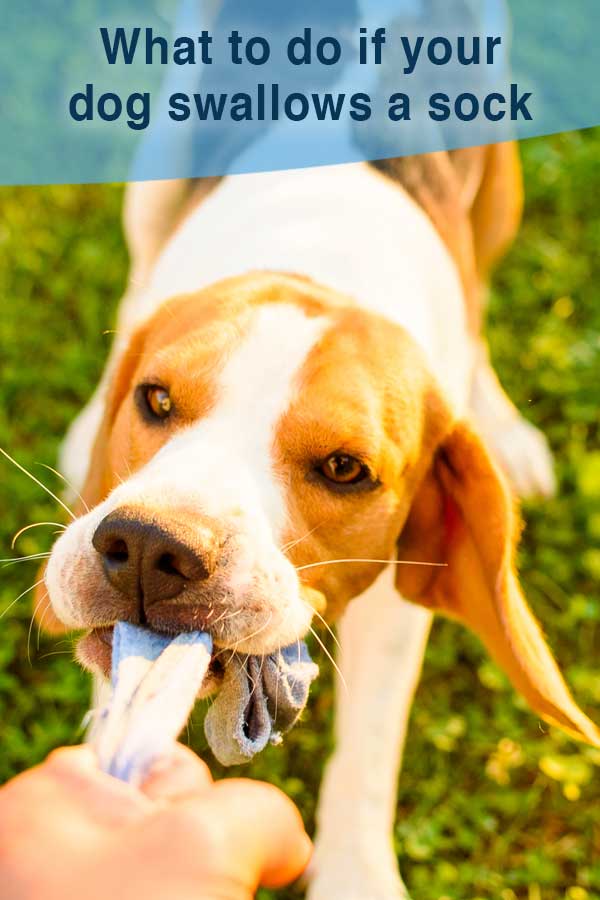 Does hydrogen peroxide work to make a dog throw up?

Short version: Making my dog throw up the sock using hydrogen peroxide worked, eventually. My dog puked up the sock and he was fine. No trip to the vet. No money spent. Phew.

Once we decided we were going to try to make Remy throw up using hydrogen peroxide, we kept him on a leash so we’d be able to grab him if he did throw up the sock.

We are blessed with a dog who gets possessive of his own puke (!!) and I knew he’d for sure try to re-grab the freaking sock.

First dose of hydrogen peroxide went down, no puke.

Second dose … he threw up a lot. But no sock.

We gave a third dose and decided this would be the final dose. I’m no vet, and I don’t know how much hydrogen peroxide is safe to give. (Turns out, a third dose is generally not recommended for safety but it didn’t seem to bother Remy.)

So on the third dose … he puked again. Still no sock!

This dog is seriously stubborn.

Some dogs will throw up socks on their own

So, I decided at that point I would just wait it out and hope for the best. I went to bed that night hoping he’d be able to pass the sock or that his body would naturally throw it up just as he throws up pieces of wood, grass and chunks of plastic. (Oh, the joys!)

I’ll give him this, his system is efficient!

So, I got up the next morning and greeted my pup out in the living room where he sleeps. And oh my God, there was the sock! He’d puked it up in the middle of the night!

Only, after seeing me, my idiot dog instantly made a beeline for the sock and quickly RESWALLOWED THE SOCK!

So we began the hydrogen peroxide treatment again.

My suborn dog refused to throw up. He threw up in his mouth and swallowed it.

I could tell he was feeling woozy. I had him on a leash so I could quickly get him away from his puke.

And then up it came, sock and all!

I had to practically tackle my dog to keep him away from re-eating the sock for a third time!

Wooooo! For the win!

I got the sock.

So, long story short, keep your socks picked up and keep hydrogen peroxide on hand. It really does work.

Risks of making your dog throw up

Of course, it’s not always safe to give hydrogen peroxide. If your dog swallowed something sharp it might cause more damage to make him throw up.

Second, like I said, there’s always the risk of choking.

When in doubt, you should always ask a vet.

See our post on How to make your dog throw up using hydrogen peroxide.

Now I’d love to hear from you!

What’s the strangest thing YOUR dog has eaten?

Hopefully everything turned out OK.

Lindsay Stordahl is the founder of That Mutt. She writes about dog training and behavior, healthy raw dog food and running with dogs.

Such great information. About 20 years ago, we were visiting my mom when one morning, my 6-year-old daughter woke up before us. I found her feeding Mom's Australian Shepherd the daily heartworm preventative chews (That was before the once a month preventative). She said she was giving him treats for being a good boy. I had no idea how many her dog had eaten. So when we called the vet, he said to give the dog 2 TBSP of peroxide and sure enough, within 10 minutes, Shep had vomited up everything. I was so relieved and we learned to keep those chews out of my kids' reach while visiting.

Oh wow, that sounds scary. So glad the dog was OK!

Thank you for this article my 9 month old lab/boxer just did the same thing with my sock. I mixed the hydrogen peroxide with water and she drank it and threw up the sock and all her dinner within 10 minutes. We had her drink some water after a little while and she seems fine.

Oh you're welcome, so glad your dog is OK.

Our Lab/ Collie mix love his blanket. He is almost 10 years old. Lately he has just been tearing and chewing his blanket to shreds. He's gotten cleaver with hiding small piece in his cheek. We have never made him throw up. He has always passed pieces in stools.

OH NO!! I thought as he grew up it would improve. Now you tell me that my 11 month old Weim., that picks up anything he can find and basically says look and catch me if you can before he shreds it or just plays keep away as he slobbers it up, has next to no chance of improving. They are a smart and rascally breed, guess he is earning the name "Rascal" that we gave him. I recently lost my mom to cancer but while she was holding on she would ask almost daily, "What did our boy do today?" and there was always something crazy to share. Now each time he does something I find myself looking to the heavens and saying did you see that one Mom? Guess he will be my source of connection to her. Thanks for always sharing your stories so I know I am not alone. Just hoping for improvement some day.

Haha! This is what we get for choosing a crazy breed, but we love them!