I am excited to announce I brought home my newest foster dog Monday afternoon.

Barkley is a 2-year-old Yorkie/Lhasa Apso/Maltese mix. More info about him coming soon, but he has been a good little guy so far.

I’m not trying to take away any credit from Barkley. I believe he really is a good dog, but part of the reason he has been so good is because I haven’t given him any opportunities to be “bad.”

When I welcome a new dog to our home, no matter what anyone tells me, I always assume the same:

1. The dog is not housebroken.

2. The dog is not good with dogs or cats.

When I get a new foster dog, sometimes I won’t know anything about him other than what he looks like. In Barkley’s case, I got to meet his previous owner and she gave me lots of information about him. This was very helpful, but I still can’t assume he will act the same way at my house as he did at her house.

To help a new dog be on his best behavior, prevention can go a long way.

Dogs are contextual. It’s kind of like how I might not recognize my dentist if I run into him at the grocery store. He’s out of context.

2. Dogs don’t always ask to go outside or show that they need to go.

Some dog owners assume that a new dog will go to the door and whine when he has to go potty or that he will paw, pace or bark. I’ve had dozens of dogs in my home. Most do not ask to go out (or maybe I’m not getting the message). Do yourself and the dog a favor and head outside at least every two hours.

3. Male and female dogs could mark in your house.

Keep all new dogs on a leash and near you for a few days so you can supervise. Marking is not the same as having an accident. I’m not sure we humans know exactly what dogs communicate through marking, but we do know it sends a message to the other animals in the environment – I’m here! I think of it as a Facebook update.

4. If the dog peed outside right away but hasn’t pooped yet, just assume he still has to go!

Take him back outside every 15 minutes or so until he goes or head out for a walk to give him enough time to go. I notice a lot of smaller dogs will poop in the house unless you take them on at least a 20-minute walk.

5. Unless the dog is in his kennel, take him outside at least every two hours.

That way you will prevent accidents. It’s totally reasonable to expect a new dog not to have any accidents at all – as long as you are doing a good job getting him out often enough!

6. If the dog is not in his kennel, he should be under your direct supervision.

I recommend keeping the dog leashed at all times for at least the first three days.

7. Remember not to get mad if the dog does have an accident.

You don’t want the dog to be afraid to pee in front of the crazy lady who yells. Just get him out more often and reward him when he does what you want.

9. Go for lots of walks so the dog has plenty of opportunities to relieve himself outside.

Barkley seems like a friendly guy, and I was not worried about any fights between him and my mutt Ace. Still, I know it’s best to take precautions. Here are some basics so all goes smoothly between your new dog and your other dog.

1. Don’t allow direct eye contact between the dogs when they first meet.

Try to keep one dog turned to the side or just move your own body in between them as needed.

2. Distract one or both dogs if there is any tension.

When dogs are tense, they are more likely to growl or snap. Sometimes a dog will tense up and then decide to do a friendly play bow, but I still like to ease the tension to keep the excitement levels low. I noticed Ace getting a little tense when Barkley was super excited, so I made sure to ease that tension by giving Ace a butt scratch and some friendly pats on his side. I also blocked Barkley from jumping all over Ace. He loves Ace!

3. Don’t allow the dogs to get too excited.

Playful excitement isn’t necessarily bad, but it can easily escalate from play fighting and chasing to an actual fight. I prevent this by allowing basically no playing in the house. No rough housing. No chasing games. No tug of war. No wrestling. Instead, I encourage the dogs to hang out quietly on their beds. Of course, we play from time to time indoors but I keep the energy levels controlled and I initiate the play.

4. Keep the new dog on a leash at all times.

Barkley has his leash on whenever he is not in his kennel. That way I can keep him near me at all times and also pull him back if he is bothering Ace or my cats. Sometimes a baby gate can also work well for creating a barrier between the dogs that still allows them to interact a bit. It’s still important to supervise the dogs whenever they are not in their kennels.

5. Trust your cat’s judgement of the dog.

My cats are used to dogs, and they can read a dog’s body language better than I can. I trust their judgement. They were not fazed at all when they met Barkley. They immediately claimed his blanket and checked out his kennel and toys. They had no need to jump to higher ground or to run and hide. They hung out at his level and didn’t even leave the room. If, on the other hand, my cats were tense, extra vocal or hanging out on furniture higher than the dog, I would know to take extra precautions.

6. Don’t get upset if your own dog growls at the new dog if it is an appropriate correction.

Ace is generally laid-back and submissive, and I trust him around other dogs. It’s rare that he will snap or growl, but when he does it is usually appropriate. I do my best to keep Barkley in line and pull him away whenever he is getting too excited for Ace. But at one point in the last few days, Ace growled at Barkley to tell him he’d had enough pestering. Dogs communicate by growling, and there was nothing wrong with Ace telling Barkley to knock it off.

7. Pick up all toys and bowls so there is no resource guarding.

It’s possible for a dog to guard anything he sees as valuable. Most often a dog will guard toys, bones, food, other dogs or his owner. But a dog could guard pretty much anything like his bed, his kennel, a blanket, the couch, a certain room or even his water dish. Make it easier on yourself and pick up anything you can that either dog might decide to guard. Feed the dogs in separate rooms or in their kennels until you know there is no food aggression.

When the new dog is in his crate, that’s the perfect time to provide both dogs with special treats and chew toys. Some of Ace’s favorites are Nylabones, Kongs and  bully sticks.

What tips do you have for potty training an adult dog or preventing confrontations between the dogs? 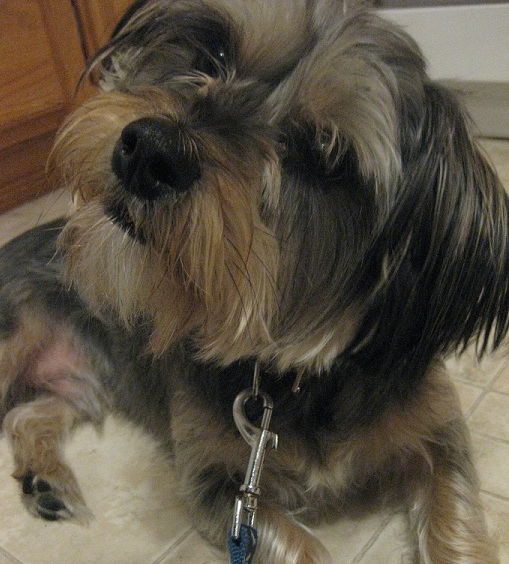