There’s one guy in my apartment complex who is out walking his dogs every day of the year. That’s saying a lot in a state that snows for seven months and is either 90 degrees and humid or raining for the other five. There are approximately four nice days in North Dakota every year. I think so far we have had two.

Some of you might know my boyfriend grew up in California. This means I have to spend a lot of time defending the Midwest to him and his family. This is nearly impossible. It is hard to come up with a response to “Why do we live here again?” when it has rained for 16 days straight. Summer has not started yet and June is half over.

North Dakota is not really known for its great weather. But I love the weather here. Really, I do. I grew up in Minnesota, which is basically the same as North Dakota, just add a few cities and a lake for every person. Growing up in a state where the average January temperature is 11, winter was always my favorite season. My dogs, brothers and I spent hours sledding, tackling and playing in the snow every year.

But it’s not just winter I’m a fan of. There’s something about the extreme weather changes in the upper Midwest that sends me and my mutt out the door. One month Ace and I are out running in -25 degree weather, wearing so many layers that I actually sweat from overdressing. Trust me, that can only happen to a Minnesota kid. The next month I’m out running in a tank top and shorts, unable to keep cool no matter what. I love the extreme temperatures, the seasons and running my dog no matter what day it is.

As for that neighbor of mine, I’d post his picture here, but that might be a little creepy since I’ve never actually talked to this guy. We have glanced at each other every now and then as our paths cross. We are both thinking, yeah, we are the only ones who do this. 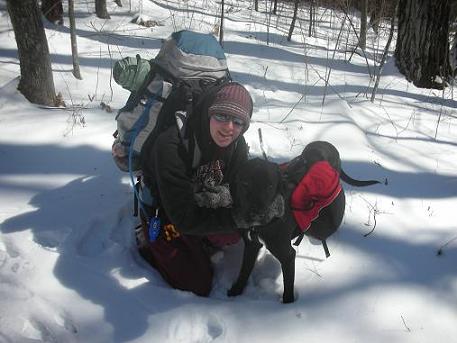 Previous
Stop Your Dog From Crying All Day
Next
Will someone get rid of this pest?
Click here to cancel reply.

I'd ask him if u can take a photo of him and his dog...I got into the habit when I was doing the walking challenge...cause 31 photos of me and chels gets mighty boring...people loved it

Aw, thanks Tawna. I want to take Emma for a run sometime. And Ace wants to meet her (and you)!

We(the family) only like to tease you bad because Weed California located to the north by the Oregon border near Mt.Shasta and Ephrata Washington in the middle of the state are also places you have to get accustomed to. TOO many mountains or TOO much flatland, hot or cold weather, its all good fun. What I like best of all its seeing the land through the eyes of our pets. My lab Emma loves to go for runs on dirt roads. The sound of gravel under the tires is her trigger to get excited no matter what state the road is in. All my love, Tawna

We live in Belgium (rain, rain, go away....) but my hubby walks our golden every single day, snow or rain. I admire that and wish I coul dhave the same level of dedication. I think this really bonds them. Every time my hubby gets home from work, Amigo goes into a frenzy of whinning and barking from happiness. He takes him every day after dinner. It's funny because while my hubby eats, Amigo sits by the table nicely and quietly. Once my hubby finishes and gives him 'the look', AMigo goes wild with anticipation. By the 'look' I mean that my hubby looks him straigth in the eye--the signal for 'Okay, let's go!' It's quite funny to watch. :-)

I had to do a double take with that picture! SNOW! OMG.... I am originally from the DESERT and now live in OHIO and it blows! The winter is awful. I beg, plead, cry and demand we move every winter. But I'm still here. I can tell you, its an up hill battle trying to convert a west coaster into a midwest northerner ;)