Ace and I visited family last weekend, and he had the chance to play some fetch in my grandpa’s backyard (the “family” even posed for this group shot). At first I thought he would be too obsessed to be allowed to play fetch, but he wasn’t too bad. We’d throw the ball for five minutes or so and then say “leave it,” and he would accept that the game was over. He even took the toy and went and lied down across the yard by himself. I am now going to start telling him “all done” whenever I decide to end a game of fetch. So “leave it” will mean “don’t touch the ball” but “all done” will mean I am done throwing it.

Over that weekend, I noticed a few things about Ace:

– He was willing to play with other dogs. He chased my uncle’s cairn around the yard and was also the one being chased. I was happy to see him incorporate his ball into playing. Radar the cairn was smart enough to figure out that if he stole the ball and ran, Ace would chase him. Usually Ace just stands there staring at the ball or finds something else to fixate on, but this time he actually played. Good boy!

– Ace actually initiated play with other dogs. My aunt brought her mutt over and Ace was the one being friendly, pushy and eager to start wrestling or chasing. This never happens because he is normally too fixated on a ball to even notice or acknowledge other dogs.

– I also noticed Ace was a little more independent. Not a lot, but he would happily just lie around the yard away from the people. He didn’t have to be at our sides constantly bringing us a ball.

– And lastly, one thing I did not like was Ace barked more while in the yard. Yes, he was ignoring the ball, but that meant he was more aware of his surroundings. He barked at neighbors and trucks and people walking by. He has never been a big barker. This might be because I live in an apartment and he never has the chance to sit outside and bark. 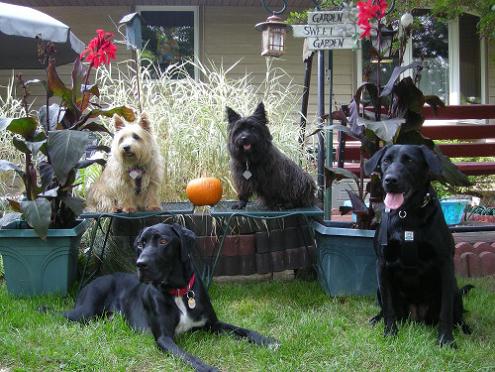 That's such a cute picture with the pumpkin! Good for Ace! It seems he had a great time.

What a great family picture! At first Momma thought the terriers were statues.

Thanks Abby! Yeah, you're right, sometimes the yapper instigated it. But sometimes Ace was guilty on his own.

With the barking did the other dogs instigate it. Chelsea rarely barks, but if Lucy yapyap does then Chelsea follows...possums, neighbours kids, anything...