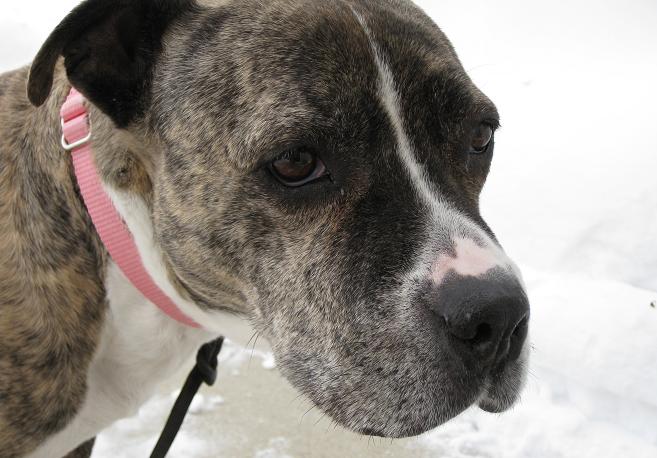 Before agreeing to foster Vixen, I was informed about her issues with being in a kennel and left home alone. I know that in order to increase her chances of finding a permanent home soon, I need to work with her on kennel training.

If more people would train their puppies to stay in a kennel, a lot of behavioral issues would be prevented from the start. Many people make the mistake of letting their dogs have too much freedom when home alone. Obviously, this gives dogs the chance to bark, destroy property, go to the bathroom indoors, injure themselves or other pets and develop “separation anxiety” where they become conditioned to feel anxious when left alone.

Many dogs end up being re-homed, abandoned or surrendered because of the damage they cause when left alone. I can totally understand this because I would not want to live with a dog that destroyed things or barked nonstop whenever I left. Training a dog to stay in a kennel prevents all of these issues, assuming the dog is not left in the kennel for unfair amounts of time. When a dog barks when left alone, two of the best things to do are increase the dog’s exercise and reinforce kennel training.

A common question people ask when looking to adopt a homeless dog is, “How is she in a kennel?”

When I was looking for a dog to adopt, one of the main reasons I picked Ace was because he had been kennel trained since he was a puppy. I lived in an apartment and worked 10-hour shifts. It was very important to have a dog that could be left home alone and trusted. Adopting a dog that wasn’t kennel trained was not an option.

Unfortunately, many of the dogs in shelters and rescue programs are not kennel trained, and that’s why they end up abandoned in the first place.

Vixen is in the rescue program because her last owner said she had “separation anxiety.”

For 90 percent of dogs that have issues with being alone, all the dog really needs is more exercise, some chew toys and a safe, comfortable place to stay like a small room or a crate.

I have been leaving Vixen alone in my laundry room for up to four hours with plenty of her own things to chew and a big dog bed to sleep on. I make sure she gets a good walk before I leave her. I turn the radio on and don’t make a big deal about leaving. I also leave Ace near her in his kennel so she knows she’s not alone. The dogs can see, hear and smell each other, but they can’t touch each other.

Vixen can be left home alone with Ace and as far as I know, she does not bark, cry, scratch at the door or chew anything she is not supposed to.

Just to be sure, today I plan on taking her for a longer run this morning and then recording her when I leave to make sure she is not barking or scratching. I will also ask my neighbors if they ever hear anything. There’s nothing like introducing yourself with, “Hi, I’m Lindsay. I live next door. Do you ever hear my dog barking?”

I don’t know Vixen’s full story, but I’m guessing her last owner tried leaving her in a kennel but gave up when Vixen barked. She probably left her loose in the house without controlling the environment much and without walking her first. All Vixen really needs is a quick 20-minute walk twice a day. She is low energy and walks at a relaxed pace behind Ace and I.

I don’t know if something bad happened to Vixen in a kennel or if she is just scared of them because she was never properly introduced. Either way, when I put her in a kennel and leave, she pants, barks, cries and claws at the door. The behavior does not stop if I ignore it or scold her. Since I share walls with my neighbors, this is a big problem.

Instead of feeling sorry for Vixen, one of my projects is to slowly get her used to being in a kennel and being left alone. This is a good idea for any dog that doesn’t like to be crated, because there are always times when it’s handy to leave your dog in one. Vixen will have an easier time finding a home if she can stay in a kennel for short periods without barking and build from there.

She is more comfortable in a wire crate versus the plastic, enclosed version. I put a wire crate in my home office beside my desk. Whenever I am at my computer for an extended period of time, Vixen goes in the kennel next to me. She has no problem with this. She can see me and realizes I am not going anywhere. She does not make a sound or try to get out. She just looks at me and then curls up and falls asleep. I am able to move in and out of the room for short periods and she stays calm.

I also feed Vixen while she is in her crate and give her treats and things to chew so being in there is a positive experience.

The next step is to increase the time I am away from Vixen, always returning to give her praise and treats whenever she is quiet. With Vixen, it’s best to ignore her if she does start barking. She wags her tail and gets more excited when I yell because she is so happy I’m near her and paying attention to her. This is true with most dogs.

All Vixen needs is time and patience. She would do so much better in an actual house rather than a townhome setting where I live. It wouldn’t be such a big deal if she barked when left alone in a kennel if the neighbors couldn’t hear.

I can’t wait for Vixen to find her own home because she will make such a great dog for the right family. One thing she loves to do is sneak up onto the bed (which I don’t allow!). She also makes herself very comfortable on any dog bed, pillow or blanket she is offered and will stay there, content, for hours.

If you are interested in adopting Vixen, send me an email at [email protected] 2/12/09 update: Vixen got adopted last month!

I enjoyed reading your kennel training and is very important, especially if dog owners are going out of town for any length of time. It is a smart move.

Thanks Taylor. I checked out that link. There's some great advice there. They key is to slowly build up the time you are away, starting with just a few seconds.

Good luck with your Chihuahua! Let me know how it goes!

This is a great post. My little Chihuahua Teddy is having separation anxiety issues my wife and I are trying to work through.

I read another great post on dog separation anxiety yesterday on my.arfie.com - take a look my.arfie.com/profiles/blogs/the-first-10-minutes-coping

I think working with a dog to train him through the process is key., Leave the house for a bit to test him, try a webcam to keep an eye from the neighbors house.

Somethings got to work - until then I'm gonna keep on trying :)

It will probably take months for her anxiety to completely go away if you stay consistent with her. I wouldn't try leaving her loose for at least 6 months, but maybe you could leave her in one bedroom or a small room like a laundry room after a few months. You just have to start small and build from there. As long as she does OK, you can keep giving her more freedom.

I wouldn't make a big deal when you leave. Just put her in there maybe 20 minutes before you leave for work and then leave the house without saying anything. A radio or TV playing should help some. I recommend recording her to see how long she actually barks and cries after you leave, as well.

It's important not to yell at her or scold her when she's in the kennel. Try to make the kennel as positive as possible. Kong toys filled with peanut butter work great! You can stick them in the freezer for awhile so the peanut butter freezes and lasts longer.

And take her for long walks before work every day.