I am nowhere near an expert on cats. I have no idea how to train them. I don’t think anyone does. But I love cats, and my two challenge me in ways my mutt Ace doesn’t. Cats are just so darn smart. Although I don’t believe all cats are smarter than all dogs, my two are definitely smarter than Ace.

One thing Scout and Beamer have taught me is patience. They will scratch my couch. They will walk on my counters. They will climb on everything. They will leave cat hair on my bed and clothes. I can train or at least manipulate dogs to do whatever I want. With cats, it’s another story.

More importantly, my cats have taught me that you don’t have to be the loudest, strongest or heaviest to be the one in control. They prove that every time I bring a new dog into our townhome. The cats will always dominate the dogs almost immediately.

Dogs and cats can get along

Cats and dogs are very different, which is why dog training techniques never work on cats. But all animals show dominance by claiming their space. Even people do this by taking over a favorite table at a coffee shop or bar. 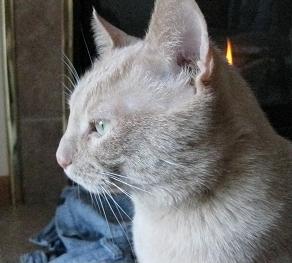 My cat Beamer (right) is the most laid back, confident cat I know. I learn so much about a dog by its reaction to Beamer and Beamer’s reaction to the dog.

Most dogs will immediately submit to Beamer as he casually claims his space on the couch or floor. He doesn’t make direct eye contact because that would be a threat. Instead, he just moves in and takes over.

Beamer understands in ways I can’t which dogs are bluffing and which dogs are truly a threat to him and Scout. If Beamer is at all stressed or agitated by a dog, I know right away that the dog can’t be trusted around cats and needs some serious exercise and structure.

Nine times out of 10, however, the growling or barking dog is just bluffing and Beamer literally steps in and the dog retreats. Other times, when the dog is extra insecure, Beamer will show no response to the dog at all. He will actually yawn or turn his back as if to say, “This dog is not worth my time.” This is most common with smaller dogs, young dogs and older dogs.

The way this 15-pound cat can silently walk into a room and calmly uses his energy to make 60-pound dogs submit to him amazes me. These dogs could take one lunge at Beamer and it would all be over. Instead, Beamer is the one in control. He proves to me monthly that dogs and cats can get along.

Beamer’s control is similar to myself when I’m out walking two or three dogs at once. The dogs’ combined weight is greater than my own and they are probably stronger. But the dogs respect that I am the one in control. If not, I’d be in big trouble.

A dominant animal will take possession of space, objects, food and other animals.

When I have a foster dog living with us, sometimes the dog will become possessive over me. I will be working at my computer and I’ll look down and see the dog lying at my feet, silently guarding me from Ace. Since my dog is submissive, he will be lying 10 feet away with his back to us.

Possessiveness over a human is dangerous because the dog can become protective and aggressive to dogs, cats or people.

When I’m working with more dominant dogs, I have to be aware of my actions at all times. I might step over the dog instead of around it, showing that I own whatever space I want. I walk through doorways first and step into any dog that is leaning or jumping on me. Backing away would only give that dog more power. Before feeding a dog, I set the bowl down and pause a few moments asking for a few feet of space before the dog can approach the food.

All of theses subtle actions are very clear messages to a dog about who’s in charge. It has to be done with confidence and consistency or the dog will not take me seriously.

My gray tabby cat Scout loves to sleep in my boyfriend’s lap. He loves to cuddle with Josh, follow Josh around and watch Josh. I’m not sure what it is, but Scout has always liked Josh better than me. Scout and I actually have a silent competition for Josh’s attention.

One thing Scout will do is take over the space around Josh. This nine-pound cat will come up between Josh and I and put his little body in between us. Then he will turn his back to me and focus intently on Josh. He will even drool a little. Not only that, but he will slowly inch himself back into me as though to push me away. He also looks for ways to elevate his body higher than mine, truly putting himself above me.

Sometimes, just to mess with my cat, I will slowly get closer and closer to Josh or try to squeeze myself in between him and Scout. It takes a few minutes before Scout jumps off the couch and walks away. It gives me a little bit of pride every time I defeat this silent warrior.

When this happens, Scout turns his back to me and intensely starts bathing himself.

“It wasn’t all that important. I have better things to do.”

Cats really do have a lot more dignity than dogs. 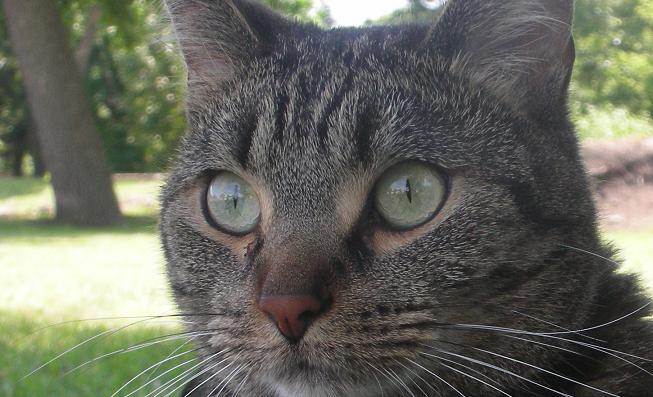 THAT MUTT: A Dog Blog » How to correct a dog with the right intensity

[...] is the most dominant animal we’ve had in our home. Some people interpret aggression as dominance, which is why it’s [...]

Ha! I am not sure. Perhaps just feeding him and earning his trust he now accepts you. Apparently the dogs have not earned his trust yet!

The feral cat may have had many unpleasant experiences with dogs chasing him, attacking him, barking or whatever. So he might never warm up to the dogs. But at least he goes on walks with the dogs along. That's great!

i have a feral black cat that has survived on his own for two winters in texas. this year he has become a loving yard kitty that lets me pet him when i feed him-but he totally dominates my big blue-tick hound and my collie dog...he goes on walks with me and my husband and our dogs back in our pastures and will not allow the dogs to get near us----what has changed this cat's mind from swiping at us to being our protector????

I'm pretty sure my cats think they have complete control over me as well as my dog.

lol, Cats definitely have the attitude. I would say its almost a snobby attitude.