Home » How to correct a dog with the right intensity

Dog handlers fail to correct their dogs with the right timing and intensity. They say “No!” with the wrong tone of voice (not seriously enough, or too aggressively). People yank on choke collars, grasp tight leashes and scream out reprimands as the dog tunes them out.

I walked by one woman who had a leash-aggressive Bichon, and the woman kept repeating in a high-pitched voice, “That’s a good doggy,” only she was referring to the dog I was walking. How’s that for unintentionally rewarding aggressive behavior?

I’m not perfect either.

I tend to get frustrated easily, and I become too aggressive with my corrections, making them useless. This is especially bad since I have a sensitive, submissive dog. Frustration won’t help gain my dog’s respect. I might force him to do what I want or teach him to avoid me in certain situations, but these are not my goals.

My cat taught me a lesson on proper corrections.

My cat Beamer is right there in the mix whenever food is involved. And I mean right there. This cat has an extreme food obsession, so he was right up in our business “supervising” and disposing stray jerky bits.

Beamer is the most dominant animal we’ve had in our home. Some people interpret aggression as dominance, which is why it’s easy to get too rough with our dogs when we want to be in control. But being in control does not involve aggression. If you observe a dominant cat like Beamer, you will see a very docile and laid back animal. Beamer is calm and cool and in control.

At one point during our training, I gave Ace the OK to take the ball, but it had rolled in front of Beamer. Just to make a point, this cat stepped right over the ball and gave Ace a quick swat. Ace immediately backed up a foot or two and looked in the opposite direction, something I’ve tried to get him to do for years.

It was Beamer’s perfect timing and perfect intensity that caused Ace to move away and break his fixation on the ball. Beamer owned that toy, as well as the space around it, not to mention Ace already had respect for Beamer because of all their previous interactions.

Beamer did not have to make eye contact with Ace. His confident body posture was enough. There was nothing aggressive about the communication that took place, and nothing personal, either. Moments later, Beamer was weaving through Ace and I, purring, as he anticipated one of us dropping a few crumbs.

So when Ace fixated on the ball a few minutes later, I tried re-directing him Beamer’s way. My correction noise for Ace has always been a loudly whispered “hey!” or a loud snap. So I stepped over the ball and used those sounds. My dog backed off and looked the other way. All my animals take the “snap” seriously as a correction because the intensity and timing of it works better for me than my voice. Josh uses the same sound, so we are consistent.

Ace actually chose to avoid the ball and needed encouragement to take it. Of course, this technique will not work when Ace is in a higher state of obsession, such as when we are outside and two people are playing catch. But for working on training indoors, Beamer’s method works great.

Your dog probably doesn’t have a tennis-ball obsession like my dog, but if you are having trouble re-directing your dog away from squirrels, other dogs, rollerbladers or whatever it might be, reconsider the timing and intensity behind your corrections. You also want to make sure to “claim” that area or object by turning into your dog and walking right into him or right over the object or space he is focused on. This will cause him to back away.

I also use positive reinforcement techniques with Ace by rewarding him with food for looking at me instead of the ball. His energy is much lower indoors than outdoors, so he is good at accepting food and ignoring the ball indoors. His retrieving instincts are very high, and I’m learning to work with them rather than against them. 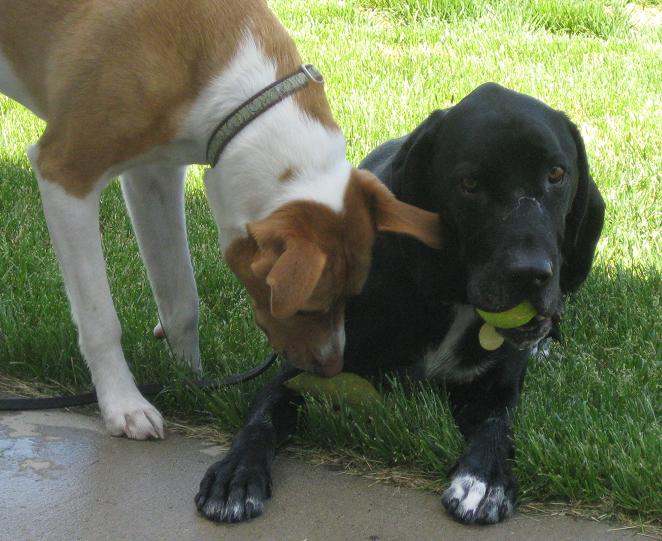 I'm getting a new dog, I have two others dogs and they already keep me on my toes. I have recently took in a stray beagle, but at the same time I already had a puppy on the way! I couldn't just leave the poor guy on the streets, so we took him in. His name is Copper and he's getting the walking on the leash very well. We still need a lot of work before I get him to come without bolting the other way, so I ussually have my other rescue dog. The other day I was frightened because I took his training outdoors since he was doing so well indoors and he bolted away from me and into the busy streets! Now I have Daisy with me. Older dogs can set a very good example for younger dogs, even if they are a foot smaller! I'm doign a lot of research on training dogs,s o I can get the best results out of the growing puppy I'm getting. Maybe one day, even Copper can set a great example for the Mini Australian Shepherd pup! We've named him Eli and he'll be here on Friday, can't wait.

Enjoy your new pup! I'm sure it will all work out well!

Well, intensity doesn't matter for me...a 140lb bloodhound pretty much does what he wants. It's not a good idea to get to harsh with bloodies either, they're quite sensitive. Fortunately, Gus is a really good dog.

Ace is very sensitive as well. Lately I've been stressed, and I can tell it's really having an effect on my poor dog! He's worried that he's the one causing it or that I'm upset with him. Poor boy!

While I'm a fan of different dog tricks, I just can't help it when the dogs misbehave and the last resort means having to spank it.

Is there any other suggestions other than treats to teach it how to behave? I really admire some of those dogs that can listen attentively to your commands but I also hate those that often refuse or bother what you have to say.

Any advice if everything else fails including the positive reinforcement tactic? Appreciate your helps.

If a dog doesn't do what you say, he may not understand what is being asked or he may be bored or distracted. Keep the training sessions fun and interesting and short. And remember it takes a dog a long time to learn something. Some are quicker than others. Some literally need hundreds of repetitions. And just because they know how to roll over on the carpeting in the living room doesn't mean they know how to roll over outside on the grass or on the kitchen floor. They need to practice every command in different areas.

I'm glad you understand exactly what I'm talking about! They know how to challenge us, don't they? :)

Hey Lindsay, I love your story about Beamer and Ace. I too also have a cat & dog and can totally relate. But I particularly appreciated your comments about dominance vs. control and aggression. I own a spunky and very stubborn Jack Russell, and I often find myself getting angry with him because he's not responding (he's VERY INTELLIGENT, so when he's not responding, it means he is blatantly ignoring me). So I agree that when you are not getting what you want, it's important to step back and re-assess the dynamics of the situation and find a new method. Just yelling more or getting angry really does not yield any positive results.