Thank you to Erin Shanendoah from the dog blog Life By Pets for sharing her thoughts on puppies as Christmas presents.

It’s the time of year when you hear constant cries of “pets aren’t gifts,” and people call for shelters and rescues to refuse to adopt out animals during the holiday season. (You hear these same kinds of cries regarding black cats around Halloween.)

My first problem with this idea is that it doesn’t take into account other reasons people might want to adopt a pet. We brought our beagle home from the shelter less than one week before Thanksgiving.

We were getting her because we had just lost one dog and our other dog was missing his friend terribly (he wasn’t exactly alone in this). If we had lost our Aussie one week later, should we have been prevented from adopting until after the holiday season?

But even forgetting those situations, I actually believe that pets can make wonderful gifts; that the gift of a new family member really brings home the meaning of the season. Under the right circumstances, what difference does it make if the new puppy comes at Christmas time or any other time of year? 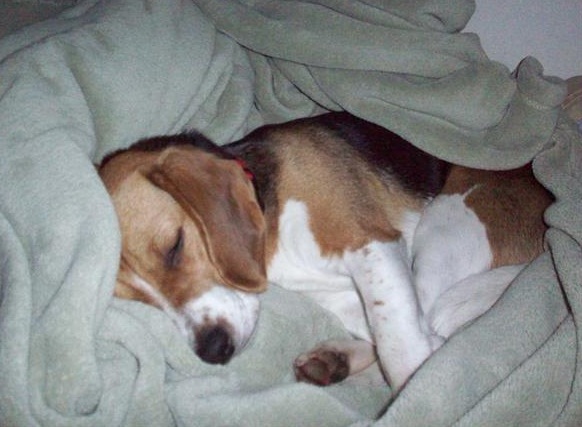 A puppy as a surprise Christmas gift for a child

I know a couple that is giving their daughters a puppy for Christmas. It will be a total surprise.

[T]he girls have no idea. They know there is no way in hell I’m getting them a filthy animal that will pee and poop all over my house where I sleep and eat. No freakin way!!! Actually, that’s not completely true. I did tell them that if they can find a dog to babysit for a whole month, and they walk it, feed it, and clean up after it every single day that I’d think about it. They’ve been arguing for a few months about the unfairness of it all, since they can’t find a way to get a dog for a month, but I’ve been telling them that if they really wanted one, they’d figure something out.

They have been walking the neighbors’ lab, and they babysat a really sweet old dachshund for four days last month.

Obviously, their father is a bit of a curmudgeon (the best kind), and has asked that his daughters (both pre-teens) work to show them that they want and are willing to care for a new pet. He’s actually really excited about taking them to meet their new puppy on Christmas morning.

Now I know that people out there are yelling at their computer screens – you can’t trust kids to take care of the pet! If that’s your pet care plan, don’t get the pet! And I can tell you, the parents of this family know that, too.

Yes, their daughters are working very hard to show they are responsible enough for a dog, but the family also knows that puppies are a lot of work, and the girls will be in school. Luckily, Mom is a mostly stay at home mom, and she is quite prepared to be the one taking the puppy out every couple of hours as they work on potty training.

Mom and Dad both know this will be a lot of work and the majority of it will fall on their shoulders. They’ve already snuck out to buy a dog bowl, collar and leash, and Nature’s Miracle. They’re making sure their cat has a way to escape the dog.

In essence, they are doing all the right things. They are ready and excited to bring a new family member into their home.

The fact that they get to surprise their daughters – on Christmas morning, no less – is just an added bonus. And I can promise you, this is a Christmas those girls will never forget. It might even be the one they call the best Christmas ever. How can you argue with that?

Now, you might argue with me, that’s not what we’re talking about. In this case, both adults are in on the giving. A gift for the children is not the kind of gift we’re against. It’s when one adult surprises another adult with a pet that’s the problem.

I’ll counter that with this story, What? We Got a New Puppy?!?!? from Life and My Finances.

Puppies as surprise gifts from one adult to another

This is a personal finance blog, so the story is told in a different fashion from how you might read it in the pet blog world, but that doesn’t change that it’s a great story.

Basically, the wife has wanted her own puppy all her life. Husband wants a puppy, too, but as a personal finance kind of guy, had the ground rules of they needed to be able to afford it. Well, they just bought a house, and the house needs some work done, so no puppy until after the house is completed.

They’ve been talking about a dog for a long time. They both know they want one. They are both prepared for one. Wife just thinks it will be a few more months. This allows the husband to find the perfect puppy and bring her home to his wife as an early Christmas present. She’s surprised. They are both thrilled as can be with their new family member.

As he says himself, “Don’t be afraid to make those memories.”

This is going to be one of the most memorable Christmases they have as a couple, filled with the joy and laughter a puppy brings. And again, I ask, how can you argue with that?

Yes, it’s possible there’s a young woman out there who has been dating a young guy for a few months, a guy who talks about how much he loved his childhood Lab. And maybe she thinks to herself – I bet a puppy would be a great Christmas gift for him. I agree, that’s not a good situation, but she could get him that puppy for his birthday, and no one would know.

It’s the job of the people screening adoption applications to prevent that kind of behavior. Putting a moratorium on holiday adoptions doesn’t solve the problem, and it prevents the magical memories being made in the previous two stories.

Pets really can be gifts – in fact, I think they are the best gifts of all, no matter what the season.

Have you ever decided to get a puppy during the holidays for yourself or a family member?

Very insightful and well written article. As a veterinarian, Doc Pawsitive is writing an article about pets as holiday gifts and even after 25 years as a vet knows you CAN teach an old dog some new tricks, the dog(and the Doc) just learn more slowly, lol!

please get in contact with me, i have a similar picture of my beagle in sleep. i would love to be your friend, she was sort of a runt rescue for me, her name was harley!~

I'll let the curmudgeon comment slide this time Shanendoah, but only because I really liked the post. I was wondering whether you'd actually quote anything, and that one was perfect.

We would have gotten the family a dog either way, since we're finally in a place home/career wise to properly care for one, and the girls are old enough to help. Surprising the girls by bringing it home on Christmas morning worked out more by happenstance than planning. One of my wife's friends had a litter of 10 puppies around Halloween. They weren't expecting so many, so she was looking for good homes for the ones that weren't already claimed, and we'd been discussing getting the girls a dog for several months.

If those puppies had been born a month or two later, we still would have gotten one, it just would have come home with us in late January or February. I honestly don't see the difference, except that my daughter's will now have an epic Christmas morning... and we went totally over budget on Christmas shopping. A new video game and some art supplies would have been a LOT cheaper. It's a good thing that flea bag is so adorable.

Thanks for sharing your story with us, Dark! Have a Merry Christmas, and enjoy that new puppy!

Dark - 1) You are a curmudgeon. Accept and embrace it. 2) That's kind of the point of this post. If shelters were to place a ban on adopting animals around Christmas, they would be doing more harm than good. Families like yours were going to get a dog, anyway. Timing just worked out for Christmas- and it's going to be an amazing Christmas for your girls. I realize that in your case, a shelter ban on holiday adoptions wouldn't matter, but it could prevent another family from giving their kids the kind of holiday your girls are going to get. And that's a lose/lose situation.

I think if they are going to make the blanket "no adoptions during holidays" then they should get everyone's birthdays and not allow anyone to adopt a pet within a month of the receiver's birthday. Same logic applies... even if the latter seems ridiculous. They are both ridiculous.

I think Mr. Curmudgeon has things figured out. My parents did the same thing with my first pet. They had me save money to buy supplies (knowing that they'd fit the bill for most things) and had me show them I was responsible. I did and it all worked out and sometimes I needed help with things. There's nothing wrong with children showing that they are willing to work for something they want so long as the parents understand the capacity of a child to be fully responsible for something. Sounds like this family has things figured out.

My first pet (guinea pig) was given to me on Christmas Eve as a Christmas gift. My mom handled me a little gift bag and warned me of its fragility and I looked in to see a little baby guinea pig. I totally loved that moment and will always remember it. Was a fun and fond memory I will always have.

Gifts should be thoughtful, loved, and memorable. What's wrong with a new family member for the whole family to love and take care of? Seems like the perfect gift in many situations.

My parents had me buy my first hamster :) And I had to do all the work, which seemed like a big responsibility at the time and I took it very seriously. They had me save up all the money for the supplies, which was also a lot for me as a 10-year-old. Once I had saved up all the money, I believe they actually bought everything for me as my birthday present.

I have never given or recived a pet as a gift but this year I plan to. My Grandpa and Gandma love dogs and they have a huge ranch with lots of place for them to run and play. In the last year they have lost a couple dogs, they still have 2 but they would love more! We have spoken to my Grandpa and are planning on getting a dog for my Grandma. We plan to give her a card with pictures and then take her to the shelter the next morning. We have two possible choices picked out for her that she can then take home with her!

I think that is wonderful. I know your grandma will love her new dog!