Home » Does it take longer for black dogs to get adopted?

Black dogs might have a harder time getting adopted simply because of their color. This logic mostly applies to big, black dogs. And also black cats. I’ve written about the topic before on this blog and for other publications.

But lately as I look at the black beauty sleeping at my feet I wonder if this “black dog syndrome” really exists.

Are black dogs truly harder to place into homes? Or is “black dog syndrome” another animal sheltering myth? Is it a way for us rescue volunteers to put the blame on the public?

“It’s not our fault he hasn’t been adopted yet,” a shelter volunteer might say. “No one wants a big, black dog.”

Shelters and rescues are not doing black dogs any good by spreading these negative messages.

People want to hear positive messages. Something like, “Did you know our rescue saved 100 black dogs from the pound last year? We have 20 black beauties waiting to be adopted today.”

The problem with “black dog syndrome” is not whether it exists – it very well might. The problem is how shelter and rescue workers don’t even question it.

Is the American dream to own a golden retriever or a golden lab?

I don’t think so.

The KC Dog Blog did a nice job questioning this very issue of “black dog syndrome.” It asks: Could it be that it seems like shelters are full of black dogs because there are so many of them in the first place?

It’s safe to say the black lab is the most popular dog in the United States.

People are obtaining their black labs somewhere. Perhaps rescues and shelters need to work harder to compete with breeders, pet shops and people re-homing their dogs. There is definitely a demand for black labs. We need to step up our game.

How to help black dogs get adopted

For the sake of argument, let’s just assume black dogs are harder to get adopted. If that is the case, then it’s just a reason for rescues and shelters to try harder.

That means making it easier for people to adopt by getting these big, black dogs out into public every day of the week, lowering adoption fees and offering adoptions during convenient hours. Getting rid of the “home visit” would also make adopting more appealing.

Rescues should offer reduced adoption fees on any long-term animals, regardless of color.

They should offer adoption specials on black animals for at least a month each year.

They could also create a fun photo contest with judges to see who can get the best pictures of the black dogs up for adoption. That could be a lot of fun!

A costume contest for black dogs could also make an entertaining fundraiser. 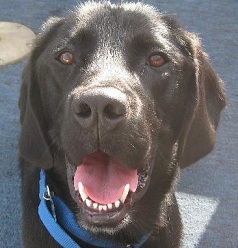 There are, of course, certain points I just can’t argue.

This is not an excuse, though. It just means shelters need to make sure to get better photos of the black dogs. It’s not that hard to get a good pic of a black dog outside with good lighting. I do this every day.

Another factor is that black pets have a distinguished look even if they have just a hint of gray. They look old. Few people want to adopt old dogs. Right, Cosmo? 🙂

It certainly does seem like black dogs and cats are overlooked. I’ve known many black dogs locally that waited years to get adopted. There are also black cats in our local shelters that have been waiting for homes just as long.

Nearly every shelter, pound or rescue worker I talk to will back up “black dog syndrome” based on her experience that black dogs do get adopted last.

Some shelters will even kill black animals as quickly as they legally are allowed because they “know they won’t be adopted.” Why waste money on a dog that will sit in the shelter for months? It’s better to “euthanize” and open up space for “more adoptable” animals.

That’s just as bad as killing a healthy dog (of any color) based solely on her breed.

Whether big, black dogs are truly harder to get adopted or not, they have a special place in my heart. I love my big, black mutt Ace. Black is beautiful. I am attracted to black dogs and cats. Sleek, black dogs tend to be my favorites. I’m a “black dog person.”

When the time comes for me to adopt another dog, I’m going to have a hard time not adopting a “black lab mix” that looks exactly like Ace.

My “black pearl.” My beautiful boy. 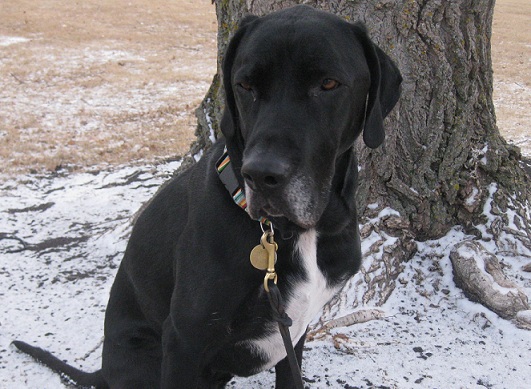 I don't think we have that problem at our local shelter. I'm sure it is because I have adopted all the black dogs!

Somehow, my three dogs are all almost solid black. It wasn't a conscious thing picking them. It just made sense at the time because they needed a home. However, growing up, we had a black poodle and black lab mix.

All dogs need love despite their superficial color. Color is the least of my worries when adopting a dog. I'm not sure I even set out to find a "black" dog previously. It just happened.

I adopted a little black dog from our local pound. She has a lightening streak on her chest, some scattered white hairs on a couple of her toes. And the rest is black. She's elegant and adorable and I love her to bits. And so does practically everyone who sees her.

But she didn't present well when I went to look at her (found her pic on PetHarbor.com) she was sick, we found out later with pneumonia, and wouldn't even uncurl and look at me. She is a very lucky dog. They had tons of other little terrier/chi/who knows what mixes. But I fell for her photo.

What a lucky dog she is!

Currently, I am fostering a lab mix who appears to look like Ace, he also has some white on his chest. I have to hear from one rescue group that it takes longer for black big dogs to be adopted. It makes me cringe. I grew up with a black lab, my dad being a vet, had lots of animals, all at once, 2 turtles, 1 dog, 3 cats.... anyhow, when I have the opportunity to adopt another dog, it will be a black dog mix as well. I fell in love with Tommy the one I am currently fostering, if he was not to find a home, I would adopt him but it appears that he may have found a permanent loving home. If he goes, I will foster another black dog that needs to be saved. I pull dogs from anywhere that are out of time and risk being put down. People are uneducated, prejudicial and cruel: black is not the color of "evil" thus the fear behind "black cat", many of us who had a black lab or any black mutt and black cat knows how untrue it is.

Thanks for all you do for those dogs, May!

There's one survey "study" that shows black dogs remain in the shelter system -overall- 24 hours longer than other colored dogs. "PetPoint collected numbers from more than 700 adoption agencies covering roughly 380,000 adoptions and found that black dogs usually stay just one extra day. And all of the black dogs in the study eventually found homes. "

As to cats, there is one "study" from 2002, but it is a singular entity (one shelter) so there are serious issues with survey numbers. Plus the shelter seemed to kill a lot of cats, period, color be darned. "A 2002 study in the Journal of Applied Animal Welfare Science that examined adoption rates over nine months in a California pound found that black cats were about half as likely to be adopted as tabby cats and two-thirds less likely than white cats. But for cats in general, the odds are not good: of the three thousand cats of all colors offered for adoption during that time, only around 600, or 20 percent, found homes. Those remaining were euthanized."

That's what I could find anyways. I think the big point is to not needlessly create or perpetuate a problem whether it exists or not. It's like with bans on adopting black cats during Halloween, despite overwhelming evidence that people DO NOT go out and sacrifice them to Slor.

I'm not educated enough to truly comment on this post, but, I just want to say that as always I appreciate your thoroghly thought out response. You have my brain thinking of things I never thought it would...