Home » How can my city become no kill?

Note: This post is part of a series on ThatMutt.com called “Saving the cats.”

If a community wants to stop killing adoptable pets in pounds and shelters, it has to change its philosophy, according to Linda Cadotte of Animal Allies Humane Society in Duluth, Minn. That shift in philosophy is to stop blaming someone else and accept responsibility.

Duluth is a no-kill city, meaning no adoptable, healthy or treatable dogs or cats were killed there in 2011, according to Cadotte, who is the director of programs and operations for Animal Allies.

Everyone must take responsibility for these animals, she said. If dogs and cats are being killed, everyone should absorb the blame. You can’t blame the public or the city or the pound or the adoption agency. Everyone is at fault.

“We’re all the same,” Cadotte said. “We’re in it to stop the killing.”

There is always room for improvement, though, and Fargo’s cat situation could use a lot of improvement.

How can a community stop killing adoptable cats?

Here are just a few ideas to start with.

Copy what works in cities that have already stopped killing cats.

I knew Duluth had become no kill, and Duluth is similar to Fargo in many ways.

Duluth is located just 250 miles to the east of Fargo. Both communities are known for their brutal winters, a noticeable college population and a nice mixture of urban and rural areas. Both are busy with tourists and travelers. Both are within reasonable driving distance from the St.Paul/Minneapolis area, which makes it easy to network with a larger community for re-homing pets.

So I contacted Animal Allies Humane Society, which has a location in Duluth as well as the neighboring city of Superior, Wis., and I asked about its role in helping Duluth become no kill.

An important piece for Duluth’s success was learning about what was already working elsewhere, Cadotte said. She spent time traveling and learning from shelter directors and rescue groups in other areas.

There is nothing unique about Duluth, she said. If other communities would like similar success, all they need to do is look at what’s already working and tailor those ideas. When you feel like you’re up against a lot of walls, know you’re not alone. Other communities are going through the same thing.

Shift your mindset and stop playing the blame game.

A shelter can call itself “no kill” because it isn’t doing the actual killing, Cadotte said. But if cats are being killed in the pounds, then that “no-kill” shelter is still contributing to those deaths by not taking responsibility for those cats.

“It’s really up to the adoption center to make the changes to support the impound facility,” she said.

By that, she means the shelter or rescue needs to make it easier for an interested adopter to adopt a cat. That way, the organization will be able to pull more cats from the pound rather than blame the pound or the public for the cats’ deaths.

It’s important for shelter and rescue volunteers to look beyond the cats that are directly in front of them, Cadotte said. “Until that shift is made, it’s very difficult to succeed.”

But even if we really can’t save them all, shouldn’t we at least try?

Make it easier for someone to adopt a cat!

An important step to end the killing of healthy, adoptable cats is to change the way your shelter approaches adoptions, Cadotte said. If cats are dying in pounds because of a lack of space or resources, then shelters need to find ways to increase adoptions.

Pinpoint where the largest impact will be.

If someone wants to make a difference for the cats in her community, Cadotte said that person should think about what would have the greatest impact.

In Fargo, for example, the community has already achieved a no-kill status for dogs. What is holding Fargo back from saving more cats?

Increasing the awareness of affordable spaying/neutering options could have a big impact in the Fargo area. Clearly there is an issue with roaming, stray and feral cats producing more and more kittens.

Working with the city and rescue groups to come up with an affordable/realistic plan to deal with feral cats would also have an impact as far as decreasing the number of cats killed in the pounds.

For other communities, changing the shelter’s adoption hours so that it is open in the evenings and on weekends might have the biggest impact. Or how about making sure every single animal is spayed or neutered before leaving the shelter rather than leaving it up to the adopter?

Use ‘overpopulation’ as a challenge, not an excuse.

Cadotte belives that in some parts of the country, the number of animals in need of homes does exceed the number of homes available. However, hiding behind “overpopulation” can also be an excuse.

Some parts of the country do have more challenges, she said. There is more breeding in the south, for example, because of the warmer weather. Every community will have its own set of challenges. No kill is not always going to happen overnight, but it is within reach.

What are some other ways a community can stop killing adoptable cats?

This little cat is up for adoption with CATS Cradle Shelter in Fargo. 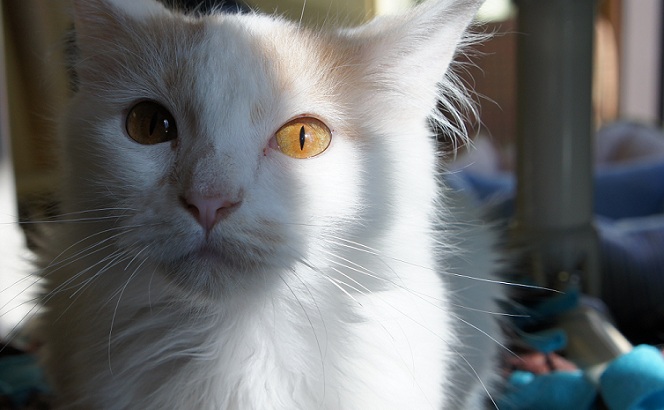 The book “Redemption: The myth of pet overpopulation and the no kill revolution in America” by Nathan Winograd is a must read. Buy it on Amazon. It’s wonderful. I have a copy. Let me know if you are in the area and want to borrow it. Heck, I’ll even buy a copy for the first person who asks.

Alley Cat Allies is an organization dedicated to the protection and humane treatment of cats. It has all kinds of resources available for how to humanely deal with feral cats.

Animal Allies Humane Society in Duluth is a wonderful organization. Check out its web site to see some dogs and cats up for adoption or to learn more about how to donate to its shelters.

The No Kill Advocacy Center is an organization dedicated to achieving a no kill nation. Check it out.

What a great article. I had no idea Duluth was no-kill, and it's very inspiring to hear. I wonder if that will ever happen in more metropolitan areas....one can only hope! Thanks for sharing!

It has happened in many metropolitan areas such as Austin and Reno.