Home » How to get more pitbulls adopted

I attended a presentation called “Turbocharging pitbull adoptions” by Kim Wolf at the 2012 No-Kill Conference. Kim worked for Animal Farm Foundation at the time.

Kim shared the following ideas in her talk, but this list is not intended to be an outline of that presentation. These are 19 isolated ideas I walked away with:

1. Acknowledge there is no clear definition of a “pitbull.”

When you market pitbulls, keep in mind everyone has her own definition of a pitbull, Kim said. The word used to be a nickname for the American pit bull terrier, but today it is a label that means something different to each individual.

“A ‘pit bull’ is not a breed or breed mix, but an ever expanding group that includes whatever an animal control officer, shelter worker, dog trainer, politician, dog owner, police officer or newspaper says it is,” according to AFF’s web site. 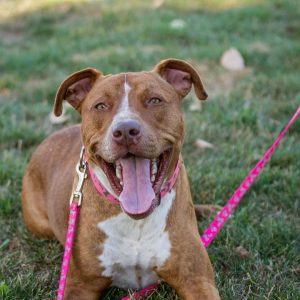 2. Focus on the dog’s behavior, not her appearance.

Some potential adopters will turn away from dogs with a “pitbull” label, Kim said. So, focus on the dog’s personality, energy level and friendliness with other animals.

Example: Daisy loves to play ball! She is good with cats, low energy and loves to snuggle! Daisy would also love to have a dog sister or dog brother to play with.

This was my favorite part of Kim’s presentation, because it is so near and dear to my heart: Shelters have to start trusting the public to adopt.

We need to stop accepting the irresponsible public myth as a reason why we can’t send dogs home, Kim said. This is especially true when it comes to pitbull dogs. Shelters try to protect pitbulls from abuse such as dog fighting by making it extra difficult for people to adopt them.

Yes, dog fighting exists, Kim said. It just doesn’t happen as often as we might think.

“To take it too far – to be too protective – we are actually denying dogs opportunities to go home,” she said. “And we’re not fulfilling our missions when we do that.”

4. Scars or cropped ears tell you nothing about a dog.

Likewise, if a dog has cropped ears it does not mean he was a fighting dog or a protection dog, Kim said. It does not mean he was treated poorly. All kinds of owners have their dogs’ ears cropped, usually for a fashion statement or for health reasons. The shape of a dog’s ears tells you nothing about his behavior. 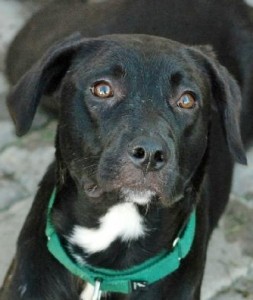 Sometimes shelter volunteers spread myths about pitbulls in an attempt to help the dogs, but instead these myths tell the public that pitbulls are different, Kim said.

Ever caught yourself spreading any of these myths?

6. Do not place additional adoption criteria on pitbull adopters.

Breed specific legislation does not work on a political level, Kim said. So why would it work for adoptions? Placing additional criteria on pitbull adopters is discriminatory. 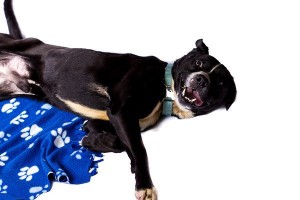 7. Do not segregate the pitbulls from other dogs at your shelter.

Some shelters will have an area for the pitbulls and another area for the rest of the dogs, Kim said. What kind of message does this send to potential adopters?

8. Do not conduct home visits or background checks on adopters.

Home checks and background checks can alienate adopters and give off a negative vibe, according to AFF’s web site. Instead, consider less formal, home-based meet and greets or “home deliveries.”

This is what I do with most of my foster animals! It works well! The “home visit” is less formal, and the animal feels more comfortable to have a familiar face transport her to her new home.

9. Use past adopters to market your current pitbulls.

Make sure to send a handful of business cards home with every adopter, Kim said. People love to show off their new dogs, and friends will always ask the question, “Where did you get her?” Make it easy for adopters to promote your shelter!

Help the adopter imagine herself with her new pitbull by posting pictures of the dogs in a home environment rather than behind bars, Kim said. Take pics of the dogs playing with toys and other dogs. Get pictures of them interacting with people of all ages, going for walks and rolling in the grass.

A picture of a dog behind bars is unwelcoming to adopters, she said. It gives off a vibe that the dog did something bad to end up in “jail” or that he is unapproachable. After all, no one dared to take him out of his cage to get a picture!

Adopters are more likely to show interest in a dog if he has a toy in his cage, Kim said. This is true even if the dog doesn’t touch the toy. If adopters see a toy next to a dog, they automatically start to think the dog is playful.

12. Dress the dogs in costumes!

Even props work well! Halloween is coming up … 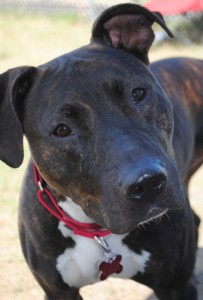 Sometimes shelters find themselves encouraging existing pitbull owners to adopt another pitbull, but they overlook the general dog-owning population, Kim said. Pitbulls live with all kinds of dogs, so let’s encourage all types of dog owners to consider adopting a pitbull.

14. Keep a list of pitbull friendly housing and insurance companies.

15. Take the pitbulls on weekly walks in public.

Take the pitbulls into the community every chance you get such as during parades, festivals and other existing events, Kim said. Or, just take the dogs on walks through busy areas. Don’t forget to bring “adopt me” vests and collars as well as business cards.

Give the dogs healthy ways to work their minds such as playing with puzzle-type toys, Kim said. These types of activities are essential for promoting healthy behavior and avoiding behavioral problems.

Other mental challenges for dogs could include taking them to training classes, walking in new areas, teaching tricks, offering them new toys or setting up dog playgroups.

Carry several of your shelter’s business cards at all times, Kim said. Make cards for individual dogs as well as the shelter itself. Have the dogs carry them in public in their “adopt me” vests.

19. Show off pictures of volunteers with their adopted pitbulls. 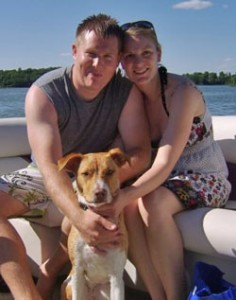 Kim recommends shelter volunteers hang cute pictures in the lobby that include past adopters with their pitbulls. Arrange several pictures together on tag board to make a cute pitbull poster. Ask volunteers and future adopters to drop off or email their photos.

What additional ideas do you have to help more “pitbulls” get adopted?

Note: All the “pitbulls” you see in this post are up for adoption in Fargo as of Sept. 19 – except for the tan and white pittie you see with her parents. She’s been adopted! Click on the dogs for more info.

excellent points of view. i am so sick of the way pit bulls are sterotyped. first of all there is no such thing as a pit bull. so i think this name should be stricken from our vocabulary and they be called by their breed name. i dont think people would be as scared or against these dogs if they went by their breed name. there are other dogs that can be just as mean as other dogs. a friend had a domberman, who attacked my brother for no reason. when i was abt 5 yrs old my neighbors dog, who was a chow, attacked me while i was petting him. the dog knew me very well. i was over the house alot. he ripped my face to pieces. i had to have over 60 stiches and still have a scar today. quebec, ca, is getting rid of all pit bills or any dogs that even resemble looking at a pit bill. if you dont get rid or your dog or move, they are going to take the dog and put him down. just look at the rescue group that came from calif to get m vicks dogs. they had to map out their trip b/c some states would not even allow them to drive thru with pit bulls. one of the dog because the top winning agility dog of all time. others because helpers. many yrs ago pit bull were called nannie dogs because people got them to watch their kids. society has done this to these wonderful creatures and it needs to stop. we dont do this to other breeds or animals or even people so why the pit bull.

I feel some campaigns I've seen have made even my own view kind of unreasonably negative of them - they can sound like horrible violent beasts that just need to be warmed up with love - rather than simply regular dogs, who are nor killing machines nor endlessly patient nannies. Just cute big dogs with square heads.

Somehow I missed this when it was originally posted, but thank-you for posting! In Australia, we generally call bull breeds "staffy crossbreeds" (staffordshire bull terrier crossbreeds), and our shelters are full of them. I really like some of these suggestions and I will be sharing them on my networks.

I have only had a few 'staffy' type dogs through my care, and I generally list them as 'crossbreed' on pet rescue sites. Mostly, I don't know what they are, anyway, and crossbreed is probably more accurate description - but I think it also means people are contacting me about the dog and not the breed of dog. That is, they're attracted to the dog for who they are, not who they think they should be.

Thank you for your input!

No adoption fees on pitbull mixes

[...] special will help the shelter increase pitbull adoptions without lowering the quality of homes. I’m assuming the shelter will also see an increase in [...]

Great article! I love the Animal Farm Foundation and everything they do. I own an AmStaff, so everyone calls him a "pit bull". It is so important for people to see that "pit bull type dogs" are just dogs. No different from any other breed. It is how you raise and treat them but the same can be said for any dog (or human for that matter)! We all need to do our part to end the discrimination that these wonderful dogs face. Thanks for the article!