How to potty train an adult dog

Home » How to potty train an adult dog

Tips for potty training a dog

If you recently adopted an adult dog, you may be surprised he is having “accidents” in the house.

It could be the dog was never properly housebroken. Maybe he lived outside. Maybe his previous owners did not train him. Maybe he lived at a shelter for months and learned to eliminate in his cage.

It is also possible the dog was housebroken at his previous home but does not understand what to do in your home. Just because a dog learns a behavior in one environment does not mean he understands what to do in a different context.

How to housetrain an adult dog

Assume the dog was never housebroken.

Don’t expect too much from your dog just because he’s an adult.

Whenever you bring a new dog into your home, it’s best to assume he is not housebroken. Treat him like a puppy.

When you first bring him home, take him directly outside for at least 10 or 15 minutes so he has time to eliminate. After that, it’s best to take him out every hour or so at first to keep reinforcing the correct behavior and to decrease the likelihood that he will go to the bathroom indoors. 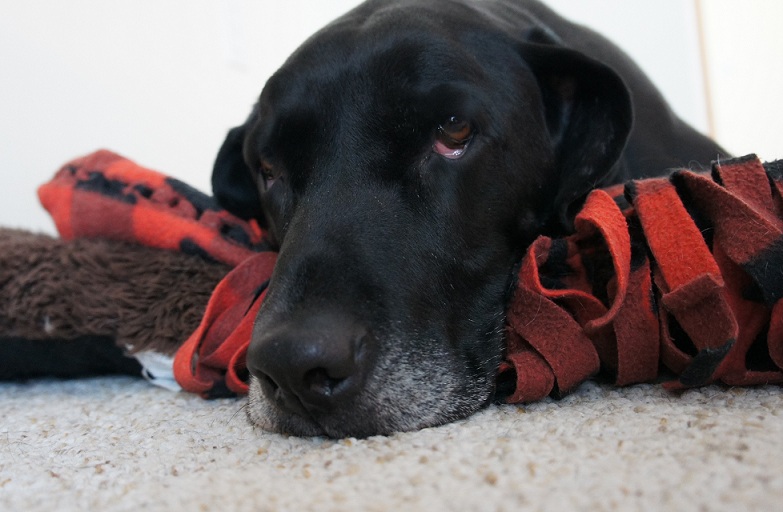 By limiting a dog’s freedom, you are decreasing the opportunities for him to have an “accident.”

If I meet an adult dog that is not potty trained, it is almost always because the owner is giving the dog too much initial freedom. I believe in freedom for dogs, too, but not until they have earned it by learning the rules of the house.

Here is how you limit a dog’s freedom (initially) to prevent accidents:

Take the dog outside often, to the same spot.

Stick to a routine by taking the dog out to the same area at the same times every day. Reward him with a treat the instant he eliminates outside.

If your dog is so obsessed with treats that he can’t even focus on going to the bathroom, try hiding treats in your pockets without your dog seeing you. Once outside, don’t put your hand in your pocket to get the treat until right after your dog has “taken care of business.” Then give him the treat.

Don’t scold the dog unless you catch him in the act.

I only recommend scolding the dog if you catch him right in the act of peeing indoors. That shouldn’t happen, though, if you are doing your job of taking him out often and supervising him when he’s indoors. A quick “No!” to show your disapproval is all you need to do. Instantly take him outside and reward him there if he goes in the correct area.

You don’t want to get overly upset when your dog has an accident. Definitely don’t yell or put him in his kennel or rub his face in his own waste. At best, your dog will be confused. (“Why is she mad at me?”) At worst, he might think it’s bad to go to the bathroom in front of you. He may then be afraid to eliminate near you outside on a leash. He might start to sneak off to more discrete corners of the house where you won’t see him.

And unfortunately, if we scold our dogs after they’ve already had the accident, they won’t understand why we’re mad. Even if it’s only a minute later. There’s really no point in scolding the dog unless you actually catch him in the act.

Reward for the right behavior!

Reward your dog when he does the right thing! Lots of praise! Lots of treats! Yay!

Keep the dog on a consistent feeding schedule.

I can’t stress this enough. Stop free feeding your dog.

Instead, feed him a specific amount of food at scheduled times. Maybe 1 C. at 7 a.m. and 1 C. at 5:30 p.m. or whatever it might be. Stick to a schedule so you can predict when your dog has to go to the bathroom. If he doesn’t finish his food, don’t worry about it. He’ll be hungry at his next meal.

I do not recommend training your dog to pee on anything in the house.

If your ultimate goal is to train your dog to pee outside, then that is where you should begin training him to go. Teaching him to pee on a “puppy pad” in the house will only confuse him. You definitely don’t want to give him the idea that it is sometimes OK to pee in the house. It’s way too confusing for the dog and he might think he can pee next to the pad or on rugs or pillows that look similar to the pad.

Recognize the difference between eliminating and marking.

If the dog (male or female) is purposely leaving small amounts of urine on the floors, walls or furniture, the dog is likely marking his or her territory. This is a marking problem, not a potty training problem. If you are not sure whether or not your dog is marking, it’s always best to take him to the vet to rule out a medical problem such as a bladder infection.

Spaying or neutering your dog typically decreases the marking behavior, but not always. If your dog continues to mark in the house, try keeping him on a leash and correcting him with a firm “no” every time you see him begin to mark. You can also use a product called a belly band (it’s basically a diaper) while you train him. Most dogs will stop the behavior if their freedom is restricted and they are corrected in the act.

Recognize the difference between eliminating and submissive urination.

Another problem separate from potty training is submissive urination. Some dogs will squat and urinate out of excitement/submission if someone tries to pet them, especially a stranger. This can be frustrating because the dog can’t always control the behavior. You can help your dog by ignoring him when you return home (to decrease his excitement level) and taking him directly outside without petting or talking to him first.

When you have guests over, ask them not to talk to your dog or pet him until she has had a chance to calm down or feel more comfortable. It also helps to take the dog outside for a bathroom break right before guests arrive.

If your dog is urinating frequently, it doesn’t hurt to take him to the vet to rule out a physical problem such as a urinary tract infection.

What other tips or questions do you have about potty training an adult dog?

For more info, check out my previous post on puppy potty training.

Previous
How to foster a cat
Next
A dog poem - for the pitbulls
Click here to cancel reply.

Dog sitting grand sons 1 year old Beagle she won"t poo outside, only explores. should I stake her? Poos inside when she comes back inside

A long walk would probably do the trick.

So I am doing all this but my dog won't pee outside at all for me to reward her. She only wants to pee on grass and we don't have any (although we put some fake grass outside... she just lays on it.) So she will only pee on walks, on grass. We stopped taking her for walka until she pees outside but she still will not do it. She spends almost all of her time in her kennel and a fenced off area in out kitchen (which she won't soil but literally spends all day whining in) but the minute we offer a bit more freedom, she'll pee on the hardwood floor. And usually only a minute or two after bringing her in from yet another unsuccessful bathroom break. I take her out at least every 30-45 mins, use the same command every time, am not punishing her for accidents, and when we were walking her we were rewarding her with treats and praise and the same command when she went. She.still.wont.go.in.our.yard. HELP!

Michelle - Your comment was a year ago. Did you resolve the problem? We rescued our 3 year old Shepherd/Hound 4 weeks ago and he has the exact same problem. However we have a fenced in yard with grass. Took week off work to work on this. Day one, today, he did pee at 6:30 (more marking, he really had a scent he was chasing) Starting at 8:00, every hour, I took him out and walked the yard with him for 15 minutes. "go potty", "go potty" Nothing. Finally 8 hours later I took him for a walk and he pooped and peed. It's now 10:30 pm and nothing in the last 6 hours. FRUSTRATING!

How are things going with you now? We're doing a back to basics with our new 2 yr old rescue.

My rambo is 3 years old and he is a miniature pomeranian. My ex and I shared him for the most part of his 3 years up until the last year he had been mainly at my house. He understands where to pee we open the door in the back and he goes out and does what he has to do and comes back. However he is always marking on bags? Furniture? Garbage bin? And i cant get him to stop. He isnt neutered and i dont want to neuter him. I know i have to give him routine and start somewhere any pointers?

I would keep him on a leash and near you at all times for a few weeks and correct him in the act so he learns the behavior is unacceptable. Then, slowly increase his freedom. Use a belly band at first to catch any of the urine if he still tries to mark. But the goal should be to stop using that eventually. Best of luck! How frustrating!

I love that you mention to treat them like a puppy. I do this every single time we have a new foster dog join us. I always go into it assuming that they're not housetrained and I section off part of the house the first few days. I take them for frequent potty breaks and I never take my eyes off of them. I'm like an overbearing mother, but we've had such great success that any potty issues are nipped in the bud right away.

Good to know we are on the same page!

Niki: You must be often, letting your Chihuahua out of your site to be rarely catching him in the act. You need eyes on him constantly so you catch him in the act so you can modify the behavior right away as it is happening. No free roming around the house. The longer he continues to pee without you catching him doing it, the harder it will be to break him of the habit.

Yes... I am figuring this out! I am gating him in my laundry room while I am gone. I am a stay at home mom so I don't really leave for long periods of time. When I am home, he is stuck to me at all times. So that does help if he tries to wonder into living room. I am taking him out constintly and giving treats for going outdoors. Thank you for your help!