Some of my friends and family members have purebred dogs from breeders.

Many of them were first-time dog owners, and they believed they would have a better chance of getting a “good” dog if they went to a breeder vs. a shelter.

I know some of you are screaming at this point – “No!!”

But whether we like it or not, there is a large group of people who believe shelter dogs might come with “issues,” and that is reason enough for them to go to a breeder.

This is where shelters are missing out on a marketing opportunity, because shelter volunteers know something the average dog seeker may not.

Most first-time dog owners do not have experience with training. When they buy a puppy from a breeder, there’s a chance they are not going to train that puppy very well or exercise that puppy as much as they should.

In six months, they might have a teenage dog with behavior problems such as chewing, barking, jumping, peeing in the house, possessiveness, pulling on the leash, etc.

We all know at least one person who bought a puppy from a breeder and ended up with an out-of-control dog, correct?

What if these same people had gone to a shelter or rescue and asked for help choosing a well-grounded, calm dog?

What if, instead of turning so many potential dog owners away, shelter volunteers were more helpful and encouraging?

There are so many good dogs sitting around in shelters that would be ideal for first-time dog owners.

Shelters are missing out on a large chunk of the market.

I cringe when I hear shelter volunteers blaming the public for “pet overpopulation” when they could do so much more to market their animals.

Shelters do a lot of marketing intended to play at people’s emotions, trying to make them feel guilty.

Playing to a potential adopter’s emotions will work for some people, but not all.

It doesn’t necessarily cater to the single, 20-something looking for a good apartment dog.

It doesn’t necessarily cater to the family looking for a gentle, socialized pet.

Or what about the single, working parent with two preschoolers?

Most people like the idea of saving a dog’s life, but they also want a good, family dog.

Not a purebred dog. Not a certain breed, but a friendly, good dog.

What if we did a better job educating the public about shelter dogs? What if we stopped portraying shelter dogs as piteous, suffering creatures?

What if we did a better job showing people that shelter dogs are, for the most part, good dogs? And that they are waiting in shelters by the thousands?

People who buy dogs from breeders often do so because they want a dog without “baggage.” They want a dog that is safe for their families.

Perhaps this should be your shelter’s goal for the year. Start a marketing campaign to advertise all those good dogs in your shelter.

The dogs can speak for themselves, if you let them.

Adopt me! I’m housebroken and come when called! I sleep quietly in my crate!

Adopt me! I passed my first obedience class! And I snuggle with kitties!

How many good dogs are sitting in your shelter right now?

Tweety is up for adoption with the Humane Society Fargo-Moorhead. She is a good dog who loves everyone she meets, according to her profile! Edit: Tweety has been adopted! 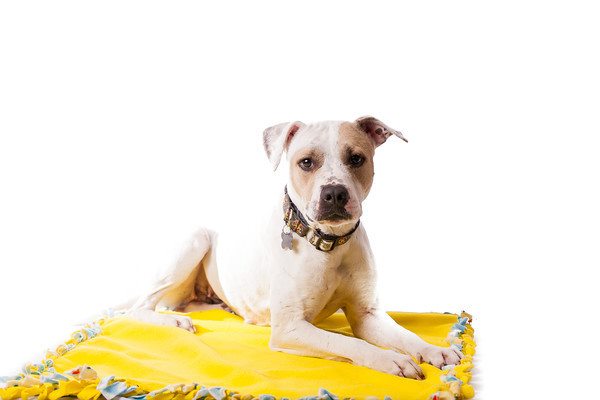 Yes, yes, yes! Thanks for pointing this out. I met my shelter doggie a year and a half ago. I wanted a dog that already knew how to walk calmly on leash so that we could walk together. I also wanted a pal that could just 'hang out' with me. After two visits to the human society where Honey Bee, a chocolate lab boarder collie mix, and I walked around the grounds on leash and sat under the oak tree..I had found my new best friend. She turned out to have AMAZING socialization. She is comfortable at street fairs in crowds and approaches small children gently to solicit pets. She did turn out to be more energetic than I realized, as she was a bit depressed by the shelter experience and sick with heartworm at the time, but her energy has caused me to lose 30 pounds as we walk and bike the neighborhood. She is a blessing in my life. (btw, the HumSoc. did know and disclose to me that she was HW+, and they treated her for free when I adopted her. She is HW negative now :) )

Bailey, the ten year old Cocker Spaniel from a local shelter that rescues dogs from high kill "shelters" has adopted me. He is resting on a pad beside this table. Could not ask for a better dog.

Bailey is a lucky dog!

This is a great post. I tell people this constantly, and almost always get the "I want to know where it's coming from" response. It's hard to change people's mindsets once they have a strong opinion of what kind of dogs are in shelters.

I had an unfortunate experience with a rescue from the south, where I was told I was getting a calm, trained, one-year-old Cairn terrier. When I picked her up, she was a five-month-old Jack Russell terrier, with little to no training whatsoever. I ended up rehoming her to a family friend who had the time, energy, and space to train the JRT puppy I was NOT expecting, and everyone was happy in the end. At the time, it was heartbreaking, but when I decide to get a dog again, I will still take that risk, though perhaps from a rescue or shelter close by so I can meet the dog first. While I don't see anything inherently wrong with good breeders, I wish more people would read posts like yours and really internalize it.

Everyone has to make the right choice for themselves, but I do think shelters can do a better job portraying their dogs as normal, good dogs. They are not all needy, abused, injured, suffering, etc.

Even if a shelter dog does have 'issues', at least you mostly know what those issues are. If you get a puppy, you have no idea what issues they may develop as they grow. Of course, a new family can be socialisation and training stars with a pup, but that doesn't account for the fundamental nature of the puppy that may be disguised by puppyhood!

But I really liked some of the exemplars you provided, and I think I'm going to rewrite my current rescue dog's profile to say the good things louder!

This post is WONDERFUL. Thank you for putting into words one of my own heart's deepest feelings. If only every shelter & rescue organization could read this!

Thank you for the nice words!