Home » 10 ways to get pitbulls adopted

Last month I did an informal survey where I asked for your ideas on how to get pitbulls adopted. Thank you so much for everyone who participated. Feel free to add additional ideas in the comments.

10 ways to get pitbulls adopted

1. Encourage people to watch the documentary “Beyond the Myth,” suggested Dana.

I also found this documentary very informative, and I recommend it to all dog lovers. Those of us in the animal sheltering world already know pitbulls are just regular dogs, but community members as a whole may not know this. Perhaps shelters and rescue groups around the world could encourage people to watch “Beyond the Myth” by mentioning it through fliers or on their Facebook pages. Arranging an event to invite community members to watch the film at the shelter or elsewhere would also be a great idea. It’s available on Netflix. 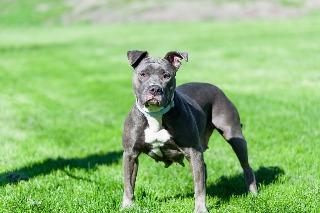 Another documentary is coming out called “Guilty ’til Proven Innocent.” It appears to be about breed discrimination, but I don’t have much info about it. You can watch the trailer here. Thanks, Brent, for the link. 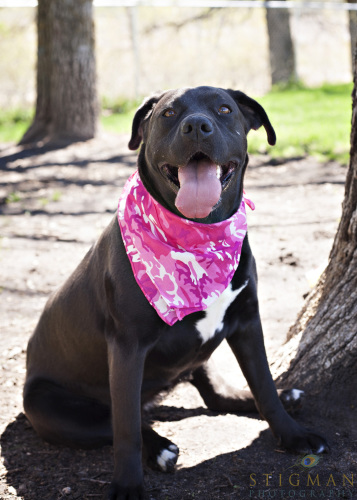 2. Great pictures are worth their weight in gold, said Rachel. “I think good descriptions of personality, needs and energy levels are a good idea too,” she said. “People can really picture a dog fitting into their lifestyle that way.”

Some of the tough-looking dogs might appear intimidating to adopters, but you can soften them up in pictures by dressing them in bow ties or pink bandannas. Also, take pictures of the dogs playing with other dogs and interacting with people of all ages or even cats. Including a toy in the pictures is great too, even if the dog isn’t actually playing with the toy.

“My apartment complex doesn’t allow ‘aggressive’ dog breeds, including pitbulls, Rottweilers, and Dobermans,” said Michelle. “Since this lowers the potential adoption pool for these dogs, they’re more likely to remain in shelters for longer.”

Michelle makes a good point. Many of us want to adopt pitbulls, but we can’t because of breed restrictions. Does anyone have any good suggestions for politely working with landlords to change these restrictions? I’d like to start a campaign on this issue, and I know insurance companies are an even larger obstacle. I think those of us who love pitbulls but don’t actually own one can be a strong voice here as well.

4. More public events with the dogs!

To get pitbulls adopted, rescues should hold more fundraising days that involve getting the dogs out in public, suggested Eleanor. The pitbulls should attend these events and not be tucked away in the back kennels.

These types of events out in public are so important, because some people would never visit the shelter. They might find shelters too depressing or they might be unaware the shelter exists. So bring the dogs to them!

“When there is a adoption at a store, festival, etc., shelters need to make sure that pits are there and that people are interacting with them and learning what wonderful friends they can be,” said Kelleigh. 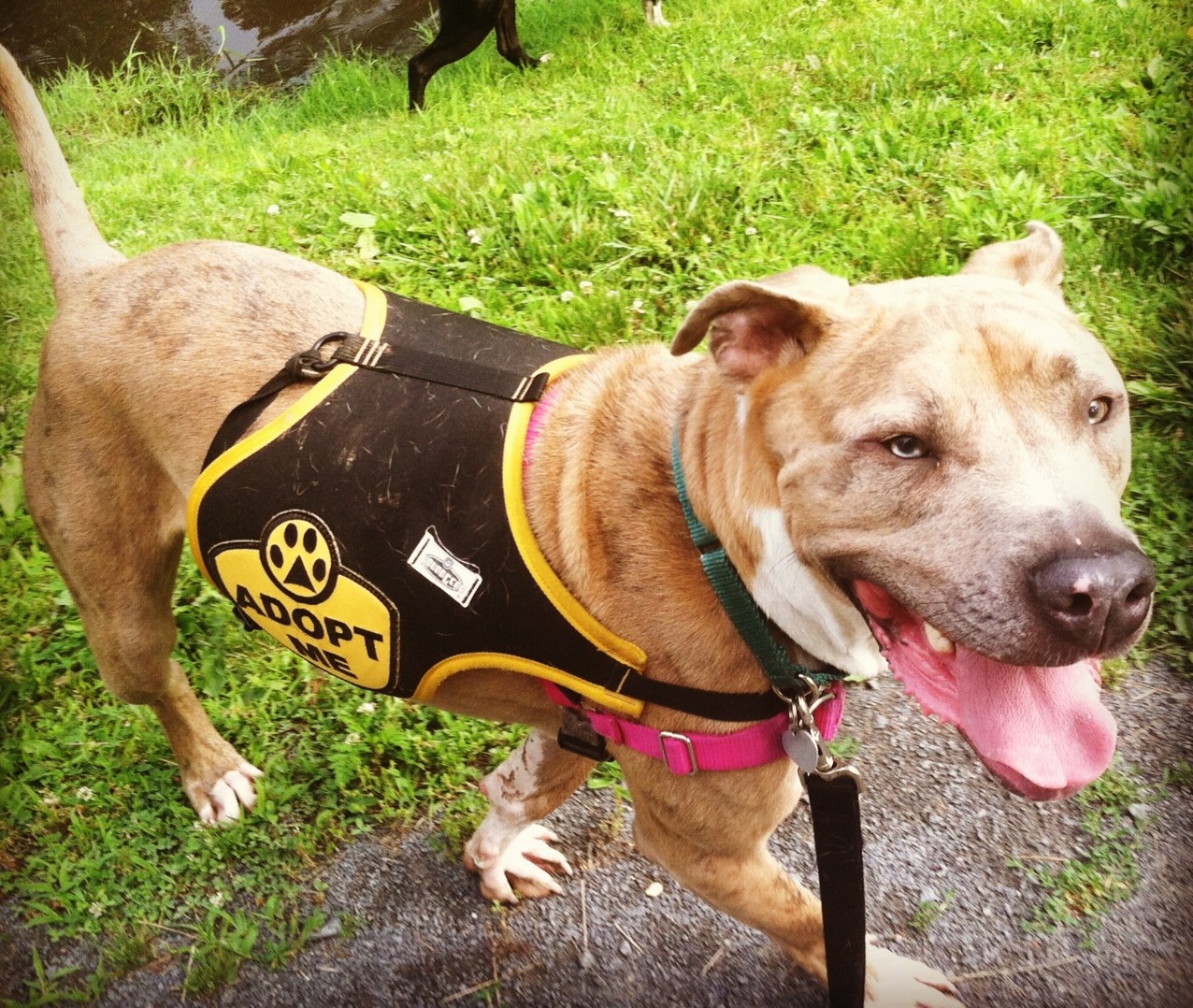 This is such a simple way to get pitbulls adopted. Every time you have a shelter dog or a foster dog out in public, he should be wearing a vest, a collar or a bandanna that says “Adopt Me!” This encourages people to approach and meet the dog. Make sure to have the shelter’s contact information printed out on business cards or fliers.

Want to help get pitbulls adopted? Order an Adopt-Me shirt or vest for a shelter in your area.

Very true. People want to adopt dogs with good leash manners, not maniacs! Even if the dog you’re handling doesn’t have perfect leash manners, it’s your job to set him up for success. Prevent him from showing obnoxious behavior such as barking, lunging or making those awful “choking” sounds. Use treats to encourage him to sit, make eye contact or walk nicely.

“Maybe have more videos of them interacting with humans, other animals, etc., to show how sweet and gentle they are.”

Shannon added that she went to meet (and adopt!) her pitbull after seeing a video of him playing with another dog.

Check out this video of adoptable dog Nemo with Angel City Pit Bulls in Los Angeles. Makes you want to adopt him, doesn’t it? Or at least kiss him on the nose?

“Get them in a room with playful, happy dogs – it’s hard to say no to that.” (like in the video of Nemo above!)

9. Arm yourself with information, she also suggested.

Provide people with info on how pitbulls can make awesome pets as well as info about local dog laws. Then, “Let the dogs themselves make the emotional argument, and the volunteers make the case for bringing a dog home.”

You should also be ready to politely explain why all those pitbull myths are false, but don’t talk down to people while doing so.

“People who adopt pitbulls and pitbull mixes from the humane society in my area receive an eight-week training pass to use with their adopted pooch,” said Ashlee.

Ashlee shared a wonderful idea, but I hope this shelter offers the same deal for all dogs and not just the pitbulls.

What are some additional ideas to get more pitbulls adopted?

Great post...I always think people just have to meet one pit bull in a friendly setting and their minds will be changed forever!

oops, forgot to leave a link to the article I stumbled upon: http://truthaboutpitbulls.blogspot.com/2011/08/its-not-just-how-they-were-raised.html

Great post Lindsay!! I happened to stumble across this article yesterday that addresses similar issues with pitbull adoptions, a great read with excellent points. The points addressed kind of fall under #9: Arm yourself with information. The author states that when pitbulls get negative media attention, people argue back and say "It's not the breed, its how they're raised" and that unfortunately puts an awful idea in potential adopters' heads that if they don't know the dog's background they shouldn't take a chance in case it was poorly raised. Puddy, our brindle pitbull, is an excellent example of why this statement is far from accurate. We adopted him this past February when he was roughly 4 years old. He came to us with worms, severe frostbite, yeast infections on half his toes, a luxating patella, joint pain, and his teeth were so bad that we had to get 6 of them extracted. Knowing this, he probably has had some form of neglect if not abuse in his past because a responsible owner would never let these health issues go unaddressed. If you met him you would never known he was "raised poorly" though, he is the happiest most well-mannered dog I have ever known. He just wants to be loved. It's tough to pick a bullet point that is more important than another, but arming yourself and informing the public is so crucial. Knowledge is power. :)

Great example. Thank you so much! I will read the article you mentioned.