Home » How to help a dog relax

So far I haven’t even walked the dogs. I just sit with them in their cages. This is surprisingly more rewarding than you might think. While taking shelter dogs out for some exercise is obviously important, sometimes it can be equally important to just sit and reward dogs for being calm. This also helps them associate something positive – attention – with being in their kennels. 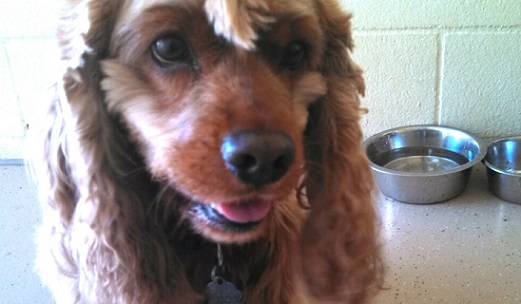 Ziggy was one of the dogs I visited with last week. I’m usually not drawn to Cockers, but he seemed like he needed some attention. Like all the others, he paced around his cage at first -his classic “stub” a blur.

Having a person in their kennel usually gets the dogs very excited, so I continue to ignore dogs that jump and paw at me. Most of them have learned the “sit” command already, so I either give the command or lure them with treats.

Ziggy was not very interested in interacting. I showed him the treats, but he would take one and then do a lap around his kennel.

This is common. Nearly all the dogs pace when I first visit. They are so excited by a human’s presence that they can’t hold still and can’t focus. They’re a little nervous – as Ziggy was – since I’m a stranger to most of them. They’re also not sure if if I’m going to take them for a walk or pack up and leave.

So what I do is sit down on the ground with my side to the dog and relax.

I yawn, which is a calming signal to dogs. I might even make a point to lick my lips (another calming signal). It shows I mean no harm.

I simply relax so the dog can relax.

With Ziggy, I just settled in with my treats and waited.

And what happened next was so rewarding to see. Ziggy began to calm down to the point where I could almost feel his energy drain away.

Ziggy was the most relaxed out of all the dogs I’ve met at the shelter. He carried a toy over for a chew. He sat in front of me and looked me in the eyes. He offered me a paw. He laid down for a belly rub and then cuddled up and closed his eyes. I massaged his ears and scratched his back. He sat real close and seemed to be in need of a real, genuine nap.

I read on Ziggy’s bio that his owner had passed away and that “Ziggy was able to provide love and comfort until the end.”

It about breaks your heart, doesn’t it?

I just thought to myself how important this dog had been to someone and how Ziggy must’ve taken his job of providing comfort very, very seriously.

I wondered how much emotional stress he was still carrying, and I hoped he knew he’d done his job well.

I kept petting his back.

Ziggy let out an audible sigh. He stretched his toes. 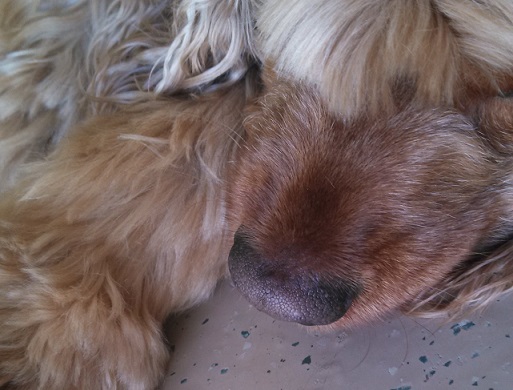 Note: Ziggy has already been adopted! (Not by me, but I wish!)

Good job! That's one of the tactics I used when I tried to capture Pierson when he was a stray. It works well in a number of situations. Thanks for sharing. :) I'm so glad Ziggy has been adopted.

Sounds like he really needed a good rest and obviously felt he could relax with you there! Good to hear he's been adopted, he sounds like a good boy :-)

I just dont understand how you can't be drawn to cockers!!! I'm glad Ziggy has been adopted.

Haha! I think I need dogs with low-maintenance coats. But Ziggy had some really, really cute curls!

Great that he has been adopted ^__^