I’ve been volunteering with Rancho Coastal Humane Society for about six weeks. Every time I visit the dogs, the group has changed. Several have been adopted, and several new dogs have arrived.

But all six weeks, Bandit has remained. 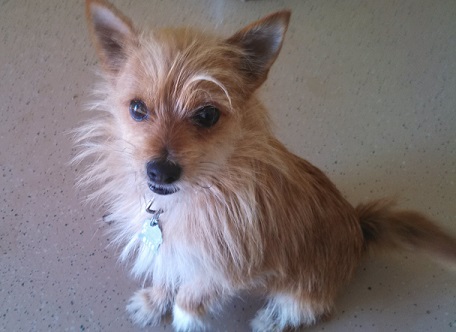 When I spend enough time with a homeless dog, I automatically begin to imagine myself adopting that dog.

I’m not going to adopt any dogs right now, but I can imagine Bandit as my dog. He would make a great running buddy. He’s one of those little dogs who can’t seem to hold still in his cage. However, once he’s taken out I hear he’s fairly calm.

He’s smart and attentive. He seeks affection and treats. I bet he’d be an easy dog to train.

And he’s a cute little thing. Plus very friendly with people and dogs.

Here in southern California the shelters are full of small mixed breeds like Bandit.

He is safe at this particular shelter. However, it’s still a shelter, and a shelter is no place for a dog long term.

Though I'm not a huge fan of tiny dogs, I must admit Bandit is pretty darn cute. I sure hope he finds a home soon. Keep us posted.

OMD, Bandit is so freakin adorable! I can't believe no one has adopted him yet. What a cutie!!!